Chris Weston sent me two more shots from the convention in Aviles, just what I needed to rouse me from my sports cards-induced torpor. 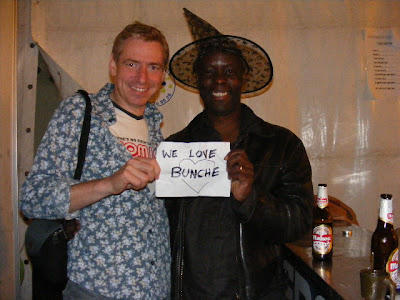 First we have Chris with the insanely-talented penciler Dougie (JUSTICE) Braithwaite, who, judging from his choice in headwear, has apparently taken up practicing witchcraft. If you've never seen the incredible ALIEN LEGION story he did (inked by Mark Farmer), I urge you to seek it out. Which reminds me, I have to dig out a torso figure study that Dougie doodled while hanging out in the Marvel Bullpen many moons ago; he just dahsed it out in no time and it was just as good as anything by an artist who specifically draws those beautifully-detailed "how to" anatomy books, instantly earning him the undying hatred of the entire Bullpen. 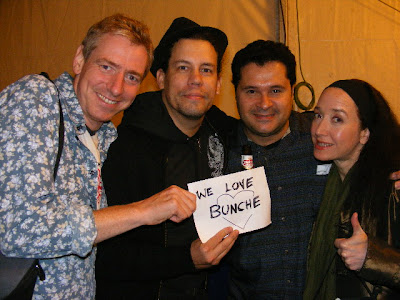 Here's Chris with three louts who will be familiar to many of my friends and former colleagues: (L-R) Rodney Ramos (the inker who singlehandedly kept TRANSMETROPOLITAN running on time, a thankless job if ever there was one), Kenny Lopez (a total sweetheart and letterer extraordinaire) and Renee Witterstaetter (president of Little Eva Ink and rep to such comics biz luminaries as Mark Texiera and Michael Golden), all three of whom are lucky that I'm nice enough not to post certian photos of them from my days up on 89th Street some fifteen years ago. Three words: ceramic U.S.S. Enterprise.
Posted by Bunche (pop culture ronin) at Wednesday, September 17, 2008

Oh my god, Rodney Ramos tried to pick me up at Beauty Bar years ago. I totally forgot that he knew you, which I discovered when Rodney and I were chatting at the bar. He then drew a picture of me as Wonderwoman. I wonder if he remembers, he may have been too drunk...Xtina

Heh. I saw a sign like that before, but this one seems to be written in a much nicer font!