"TORTURE, BLOODSHED AND LUST IN AN EXOTIC SETTING"-GOLDEN AGE SHEENA: THE BEST OF THE QUEEN OF THE JUNGLE VOL. 1 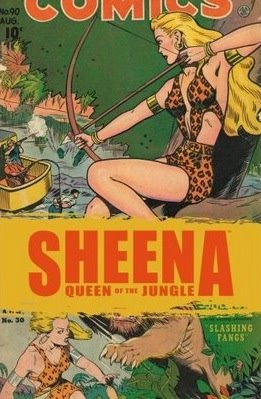 A collection of the seminal jungle-chick comic? SOLD!!!


It was only a matter of time, and Devil's Due Publishing has stepped up to plate and published the first in a proposed series reprinting the adventures of SHEENA, QUEEN OF THE JUNGLE, one of the most popular mainstays of the comics' Golden Age.

The progenitor of the female Tarzan knockoff genre, co-created by Will (THE SPIRIT) Eisner and Jerry Eiger, as well as predating the debut of Superman by a year, Sheena was literally the appointed queen of the entire jungle, an Africa readers in the days before readily-accessible travel and swift global communications were happy to believe in. Aimed at the adolescent male comics fan but just as easily enjoyed by little girls of that era (of which my seventy-five-year-old mom was one), Sheena's adventures were every bit as fun and exciting as they were completely improbable, and the series' popularity was ensured by liberal doses of the two things guaranteed to sell comic books, or just about any other form of entertainment for that matter: good ol' sex and violence. I enjoy Sheena at my present age of forty-three, and if I'd read this stuff as a kid, had I existed back in the 1940's, I would have been in hog heaven.

Not unfairly described as tales steeped in "torture, bloodshed and lust in an exotic setting" by Dr. Frederic Wertham in his infamous book "Seduction of the Innocent" and during the 1954 U.S. Senate Subcommittee hearings on Juvenile Delinquency, the Sheena adventures were little more than a catalog of the graphic violence characteristic to what one could get away with at the time and an excuse to display a scantily-clad hero who would have been right at home in the risque pinup artwork of the day. It was a winning formula that kept Sheena going strong for nearly seventeen years in the comics, headlining both JUMBO COMICS and her own self-titled book, before she was swept aside in the industry-wide cleanup of material deemed too sexy and violent for the innocent minds being influenced by such immoral and lurid works. She nonetheless continued on in a short-lived television series starring the stunning Irish McCalla (a moniker I've referred to in a previous post to as being akin to naming your shayna maideleh "Jewess Weinberg"), 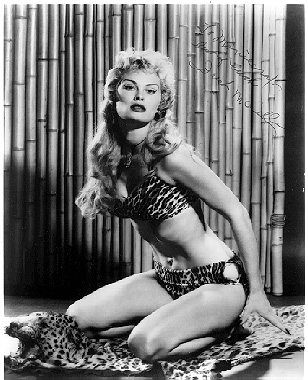 resurfaced nearly three decades later in a stink bomb of a film starring a woefully miscast Tanya Roberts (who did at least have the decency to appear in it full-frontally nude, which I assure you woke me from the torpor brought on by every other aspect of the movie), and then being unsuccessfully "reimagined" for the 2000's in an appallingly bad syndicated series starring Gena Lee Nolan, but after the original comics were expunged the magic was lost and it is highly unlikely that Sheena as she was meant to be experienced will ever be brought forth again (I deign not to speak of the beyond-tepid current comics incarnation).

Which is why I'm delighted to now hold in my hands a collection of the old school Sheena stuff, a compendium of two-fisted, ultra-violent (for the time) action, generously layered with endless images of the series' leopard skin-clad protagonist. 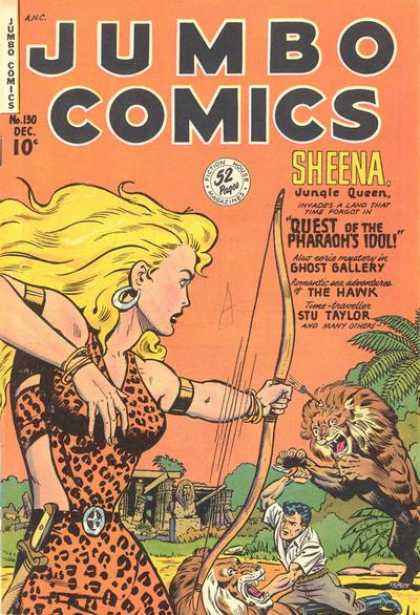 Your basic Sheena story involves Sheena and her companion, Bob, getting into and out of dangerous situations familiar to anyone who's ever seen a Johnny Weissmuller Tarzan movie, only usually with less plot, more cheesecake shots and the violence cranked up to eleven, especially when Sheena savagely kills at least one offending animal or person per installment. For example, any given story might feature: 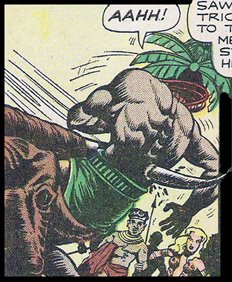 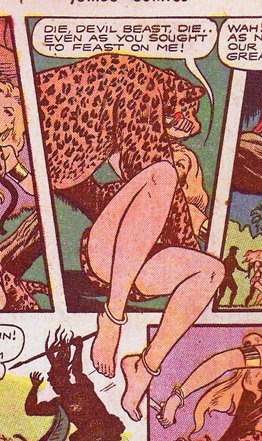 Sheena's nearly-spread and rather toothsome legs,

evil native femmes fatale who were topless if not for their strategically placed hair, who carried severed human heads in a basket, 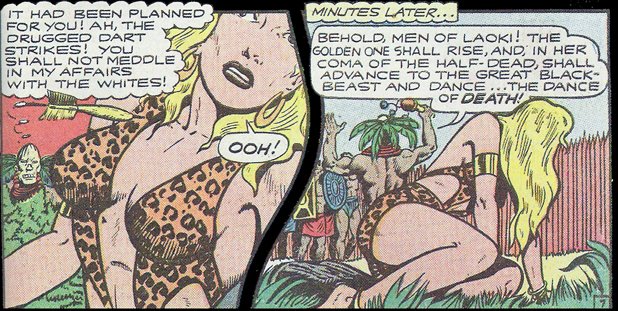 frequent opportunities for the artists to create gratuitous "headlights" panels and scenarios in which the indomitable jungle queen was forced into submission, 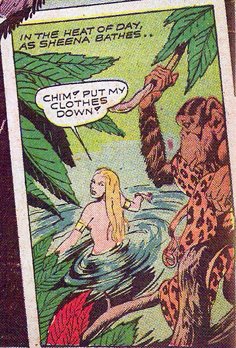 and that deathless crowd-pleaser, an opening scene in which Sheena's serene and sexy bathing is interrupted by her ape pal, Chim, making off with her duds.

This formula was repeated ad infinitum, and the readers just ate it up.

One thing of particular note is that Sheena openly and unmarriedly cohabits with Bob, who is frequently referred to as her "mate," so it's quite implicit that our hero and her man are getting it on and no one seems to mind, a rarity in the era that saw Tarzan and Jane discovering the orphaned Boy since it was deemed unseemly for them to conceive out of wedlock. And Sheena's libertine ways were compounded by the fact that she was one of the toughest motherfuckers ever to grace the four-color page, making the Nazi-bashing Wonder Woman look like a pussy by way of comparison, so I guess nobody minded her unmarried relationship with Bob because any expression of being offended by it would have most likely resulted in a hunting knife through the esophagus. 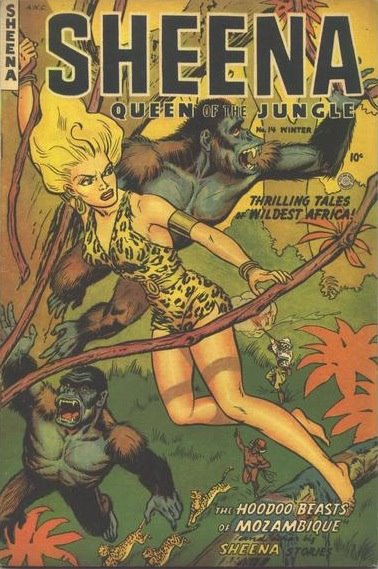 The other thing to bear in mind when assessing the fun quotient of old school Sheena is its flagrantly un-PC content in terms of depiction of most of the non-whites who appear. Sure there are "well-spoken" tribespeople, but what would a strip like this be without the constant threat of "oogah-boogah" cannibals, witch doctors and the like? These characters (read "cannon fodder") are often hilarious, so if you read this stuff keep in mind that it's a product of its era and enjoy them for what they are in much the same way that one would now approach any Tarzan film made prior to Gordon Scott assuming the role (1955).

So, as you've no doubt gathered by now, I thoroughly enjoyed this first volume of Sheena's greatest hits (although "best of" is kind of a moot point since the stories are damned near interchangeable) and I eagerly await the next. UMGAWA! 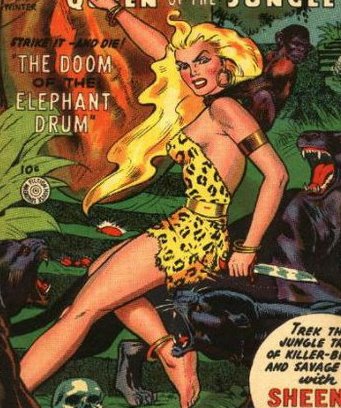 Just so you know, Playboy Mag ran some nude photos of Irish McCalla before she got the TV show. She was an artist model in the Late 40s.