"IT'S ALWAYS BETWEEN A GIANT DOUCHE AND A TURD SANDWICH" 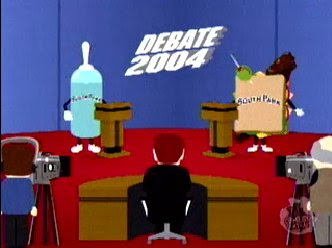 SOUTH PARK episode #119: "Douche and Turd."
Not having Comedy Central has prevented me from seeing much of the run of SOUTH PARK following its third or fourth season, with the exception of episodes caught during my time at the barbecue joint or when I visited my mom in Connecticut, so I've been catching up via the boxed sets of individual seasons. I've found that, much like its early years, SOUTH PARK maintains a fantastically scabrous sense of humor that one either embraces or is thoroughly repulsed by, and while they quite often score comedic home runs in either social commentary or just plain ludicrous humor, the series can be quite hit or miss in what it delivers, a flaw made more noticeable when when the show is seen in full-season doses. But when SOUTH PARK is on target, it can be a painfully funny joy to behold.

A prime example of the perfect fusion of topical and ridiculous humor is the eighth season episode "Douche and Turd," in which Stan, who refuses to vote for either of his elementary school's proposed new animal-friendly mascots, Giant Douche and Turd Sandwich (yes, you read that right), learns the invaluable life lesson that, as eloquently imparted by an animal-humping PETA member, when it comes to any political race "It's always between a giant douche and a turd sandwich. Nearly every election since the beginning of time has been between some douche and some turd. They're the only people who suck up enough to make it that far in politics." 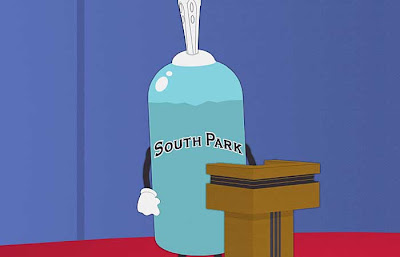 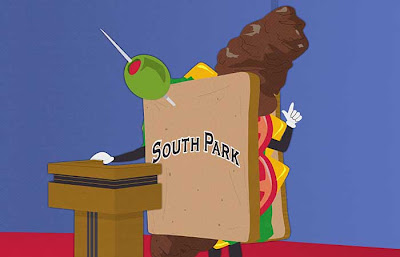 I was quite amused to see this episode as the 2008 presidential election looms, and while I don't find Barack Obama to fall into either the Giant Douche or Turd Sandwich categories — something I cannot say for McCain — I do feel the douche and turd metaphor holds applicable to just about every presidential choice since I became aware of such matters; I may have liked Bill Clinton for a number of reasons, but he was still quite noticeably rather a douche, and Dubya is perhaps the most redolent and fly-haloed turd sandwich this nation has ever seen, so maybe Matt Stone and Trey Parker are onto something here. I can't speak for those of you who've seen "Douche and Turd," but I'll never again be able to witness a presidential election without earnestly wondering which of the candidates is the giant douche or the turd sandwich, nor will I be able to witness the inevitable flags-a-wavin', Bald Eagles-a-flyin' patriotic campaign montages without hearing the following "Rock the Vote" parody playing in my head:
Let's get out and vote!
Let's make our voices heard!
We've been given the right to choose
between a douche and a turd.
It’s democracy in action!
Put your freedom to the test.
A big fat turd or a stupid douche,
which do you like best?
Posted by Bunche (pop culture ronin) at Wednesday, September 10, 2008

In general the Republican is the turd and the Democrat is the douche.

Yeah, I said it! Take that, politics! Grrrr!

How fortunate are we then, that in this election cycle the Republican team has both the turd and the douche!

Unknown said...
This comment has been removed by a blog administrator.
4:10 AM