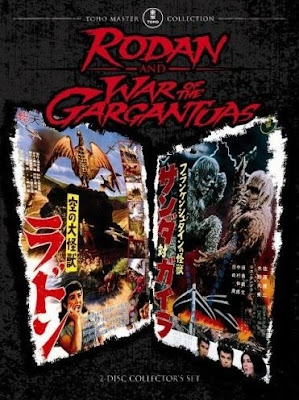 Oh yeah, baby! This is the kind of DVD release that restores Yer Bunche's faith in the Gods of Cinema. Not one, but two of the greatest Toho daikaiju films ever made, released in a terrific 2-disc set from the lovely human beings over at Classic Media, a company that has released several of the classic Japanese monster-fests in editions that the fans have performed human sacrifices in hopes of having them finally released on DVD in the manner they deserve. 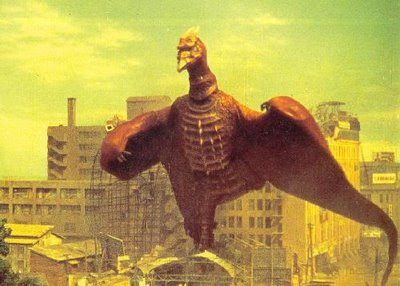 Rodan takes time out from its usual fly-by mayhem to indulge in some good, old-fashioned city-stompin'.

1956's RODAN was the first of the Toho monster opuses to be made in color, and it is indeed a lavish and thoroughly entertaining tale from start to finish. Introducing the titular flying menace whose fly-by slipstream causes hurricane-style destruction, RODAN is one of the tightest of the showa-era monster flicks and has several genuinely scary/creepy moments — Shigeru's flashback to his Lovecraftian experience in the mine that drove him mad, anyone? — and no trace whatsoever of the goofiness/anthropomorhization of the monsters that would later mar many of the subsequent giant monster flicks, or the unwanted presence of annoying little boys in short pants. Just like the original Godzilla flick, this one's serious right down to the bone, and it features Rodan looking imposing and non-cartoony, something that cannot be said for most of its later appearances in the original series. 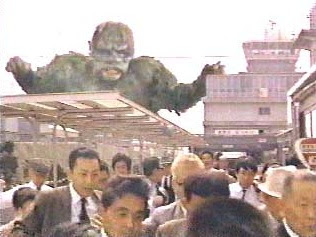 Gaira — aka the Green Gargantua — goes shopping for snacks.
1966's WAR OF THE GARGANTUAS is the rare Toho monster flick that even those who aren't exactly down with the genre genuinely love and enjoy. A kinda/sorta sequel to the previous year's FRANKENSTEIN CONQUERS THE WORLD, the thrust of this one is the sudden appearance of a gigantic "gargantua," a ninety-foot-tall shaggy sumbitch whose sightings contradict one another insomuch as he sometimes shows up in the mountains and is brown and somewhat sad-eyed, while at other times he's green, looks like Clint Howard, is mean as a premenstrual chain saw, enjoys causing wanton acts of mayhem and merrily eats people, in one case memorably munching on a hapless cleaning woman and spitting out her tattered clothes when he's finished. How could one monster be so diametrically opposed to itself? Simple, jackass: there are two of them. Yes, it's the age-old story of polar-opposite brothers, and it can only end in tragedy, despite the hysterics-inducing "acting" of a blatantly stoned and disinterested scientist Russ "I was Riff in WEST SIDE STORY" Tamblyn. This one's a stone hoot from start to finish, and you simply have not lived until you see the from-out-of-nowhere performance of "Feel In My Heart""The Words Get Stuck In My Throat" by chanteuse Kipp Hamilton (who?).

So TRUST YER BUNCHE and get out there and add this two-disc treasure to your DVD collection. Old school monsterheads know what I'm talking about, and if you have kids you owe it to them to sit them through these, especially WAR OF THE GARGANTUAS. Hey, Amazon exists for a good reason! 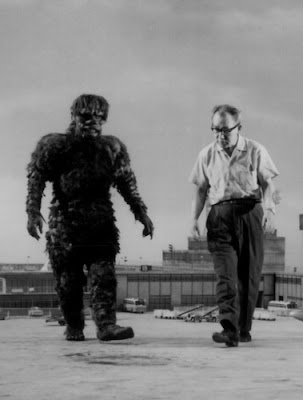 Special effects god Eiji Tsuburaya works out some particulars with Gaira. (Special thanks to August Ragone's excellent THE GOOD, THE BAD AND GODZILLA website for the cribbing of this shot)
Posted by Bunche (pop culture ronin) at Saturday, September 13, 2008