WHEN WILL I EVER LEARN? 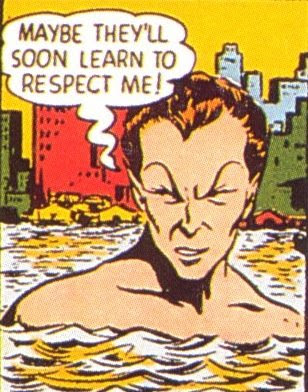 Keep on dreamin', wet-boy...
Once more Yer Bunche finds himself with egg on his face after being lured in by yet another contemporary Marvel comic, and I'm all fired up and rarin' to rant.

I love Namor, the Sub-Mariner. I've loved the Sub-Mariner since I was four, so I guess he'd be considered my first favorite superhero, and even when his adventures bore the stamp of mediocrity or downright craptasticness (which, to be honest, was more often than not) I nonetheless thrilled to his tremendous potential. Namor was a vengeful anti-hero, a noble demi-god of the deep who even the most powerful of Marvel's A-list heroes had the good sense to avoid fucking with (whenever it was avoidable), and with few exceptions he's never been handled well as a character. But, like those who hold out hope for the day when someone truly figures out exactly what to do with the Creeper, I still check in when I see a new Sub-Mariner book gracing the stands, no matter how many times my faith is rewarded with a torque wrench to the nads. Which brings me to the latest Namor effort, SUB-MARINER: THE DEPTHS #1, the first installment of a five-parter from Peter Milligan and Esad Ribic. 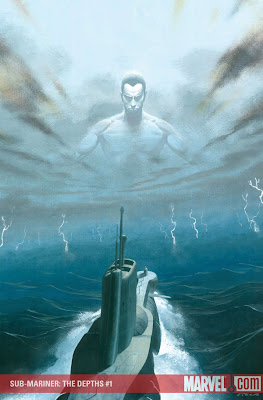 The first issue is a handsomely painted affair that introduces us to a scientist who's one of those professional debunkers who goes around proving that Bigfoot is actually just some hairy Armenian chick, or that the famous photo of the Loch Ness Monster is in reality a blurry image of an elaborate bong constructed of bagpipes and a haggis that was hastily chucked into the loch when the authorities busted an impromptu post-cabur-tossing weed-fest, and this time around the guy's out to prove that the Sub-Mariner is nothing more than a legend passed down by sea-farers.

Okay, I honestly don't know so I have to ask: are books bearing the Marvel Knights imprint supposed to be some sort of outside of continuity dealie, or an Elseworlds kind of thing? I certainly hope that's the case, because if this guy's out to prove Namor's nothing more than a myth, he must have just awakened into the Marvel Universe about five minutes ago. Namor's been an historically documented figure in that imaginary world since 1939, first showing up to wage a war of terrorism upon the surface world, then later joining no less than Captain America and the original Human Torch — two of the very highest-profile heroes of that era — to kick boatloads of Nazi ass. After that he was famously found by the Fantastic Four's Human Torch following nearly a decade of being an amnesiac homeless person, and upon regaining his memory he resumed his warlike ways, frequently bedeviling the Fantastic Four and brazenly bird-dogging for some pussy from the Invisible Girl (who wasn't exactly averse to the idea). 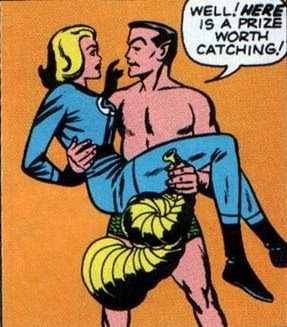 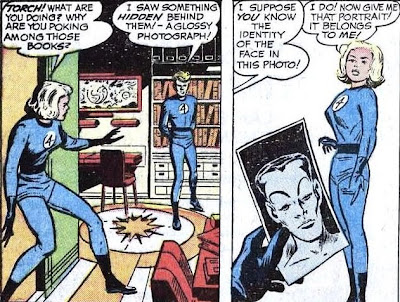 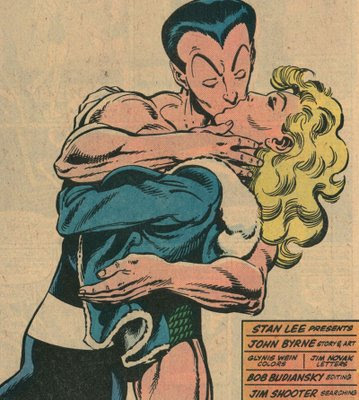 I know he can't kick Namor's ass or anything, but seriously, how does Reed put up with this shit?
After that the semi-nude Spock lookalike has been all over the place and carved out a niche for himself among the great Marvel characters, so how is it possible that his existence has gone supposedly unnoticed? I sure as hell hope this is some "alternate take" kind of bullshit, or else somebody was majorly asleep at the wheel.

Anyway, the story fills an entire issue with the scientist leading an expedition into the Marianas Trench in hope of locating Atlantis, all the while telling the crew of the submarine he's on that their belief in the Sub-Mariner is mere superstition (translation: "You guys are obviously a pack of fucking idiots!"). Well it looks like my belief in the Sub-Mariner was mere superstition because, even though I shelled out my $3.99 for a book whose cover bears his name and image, Namor is not to be found in one single panel of the entire issue. Not one fucking panel. Much like the beautifully-illustrated current run of THOR, nothing, absolutely fuck all happens in the initial chapter, and while I hated the first issue of the THOR relaunch, the creators of that snoozefest at least had the common decency to have the main character show up.

As a hardcore Namor booster, I have to say that I am not only disappointed, I am positively livid. I swear that as I beheld the "To be continued" blurb on the last page, I heard the lyrics to Dr. Know's "Fist Fuck" echoing in my head. "Fist fuck! Right up your ass! Fist fuck, baby! Take it like a man! A greasy hand! Thrust in your ass!" And as I felt this spiritual manual violation I pictured Namor himself, still proud but finally defeated, alongside me as the current regime at Marvel had its way with both of us, leaving our unwilling buttholes an Imperius Wreck (don't worry if you don't get that one, the Sub-Mariner groupies will explain it to you).

I'm pissed off enough to flip through the next issue and see if Namor's at least in it, but even though he's depicted as being on the cover for issue #2 I sure ain't holding my breath. 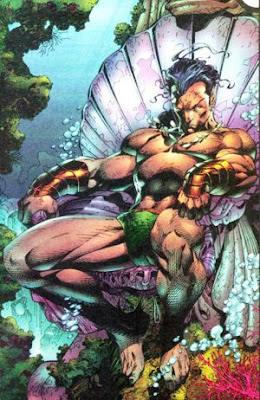 Not to mention that Namor & Atlantis has been known to declare war on the surface world and attack New York from time to time. That at least should have shown up on CNN.

Now if the story took place in the 1930's on board some old ship like the one in King Kong. Or lengthen out the first Sub Mariner story that would have been sense.

I flipped through the issue in the store and when I saw that it was out of continuity and that Namor isn't even in the first issue, I put it right back on the shelf and saved myself a few bucks.

If you're as big a Namor fan as I am — and you seem to be an even BIGGER one — I'd recommend you get the SUB-MARINER limited series that Marvel put out last year. It's in trade paperback now.  It's pretty well-written, Namor is in character, and it integrates him fairly well in the current Marvel universe.

Any review that quotes the immortal Dr. Know is immediately the greatest piece of criticism ever published in Western Literature.