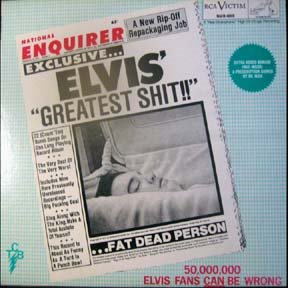 The title says it all.
No way would the estate of the King allow this compilation to be released legally since it contains literally the worst shit Elvis ever recorded, most of which is culled from his "films." A goldmine of unmitigated crap, this is a real endurance test, even for the most diehard of Elvis-heads, and includes such cringe-worthy horrors as "Song of the Shrimp," "Dominic the Impotent Bull," "There's No Room to Rhumba In A Sports Car," the virtually-unlistenable "Confidence," "Signs of the Zodiac," "Queenie Wahine's Papaya," and — I shit you not — "Fort Lauderdale Chamber of Commerce." We also get treated to a couple of live tracks that present a very wasted Elvis butchering a couple of his classics, but the album earns its hefty collector's price with the inclusion of the King's incredible rendition of "Old MacDonald Had A Farm," in which Elvis sings the Old MacDonald part and makes it clear that if the animals of his farm ever get out of line he will merrily eat each and every one of them. And just when you thought this album was as over-the-top as it could possibly get, the distributors — listed as both "RCA Victim Records" and "Rip-Off Corporation of America" — included a xeroxed copy of one of Dr. Nick's prescription sheets, a horrifying artifact that makes one wonder just how Elvis survived as long as he did.

This totally illegal 1983 classic was re-released on CD in 2004 on the Dog Vomit label, so start your Google search now!
Posted by Bunche (pop culture ronin) at Thursday, September 25, 2008

That's fairly awesome. However, I read that he was really ashamed of a lot of those movies and songs, so maybe that humiliation contributed to the drug use...