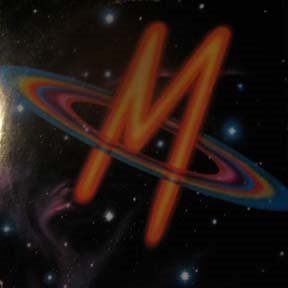 If you were listening to the radio during the spring and summer of 1979 you are no doubt familiar with “Pop Muzik,” a monolithic one-hit wonder of epic proportions. You know it, the one with the nasal chorus of:

I tell you, the fucking thing was everywhere and that’s no mean feat for a tune as bizarre as it was at the time. Punk never really had any impact on the airwaves in the States and the so-called "new wave" had not really happened yet so no one knew quite what to make of “Pop Muzik,” but it had an infectious tune and you could dance to it, so it was welcomed with open arms by a bewildered public. Come to think of it, this hit at about the same time as Gary Numan’s equally epochal “Cars,” making them the real vanguard of new wave. (I love how both of those songs are considered '80's music and neither of them actually hail from that decade.)

Anyway, most people never bothered to pick up M’s (real name Robin Scott) full-length album — I certainly didn’t until years later when I snagged it for a dollar in a cutout bin — and there’s good reason for that: other than the hit single every other track bites a huge, veiny moose cock.

My curiosity about the LP was spurred by how good the song on the B-side to “Pop Muzik” was, a truly strange synth-rocker entitled “M Factor.” When I picked up the forty-five and had listened to the A-side a few times I flipped the disc over and checked out the also-ran, a song that was actually strong enough to warrant a featured release of its own. Yet for some obscure reason “M Factor” was omitted from the “New York, London, Paris, Munich” album, which really pissed me off since I got the single years before I really started taking good care of my records and it had existed for years without a sleeve, collecting the inevitable pops and hisses encountered when played again. Then, again many years later, I stumbled across a mint condition Mexican twelve-inch single that included both “Pop Muzik” (here retitled “Muzika Pop”) and “M Factor” (“Factor M”). But what made the disc really noteworthy was the fact that it was one of those records where you had to drop the needle in precisely the right groove, depending on which song you wanted to hear; side A included the single-length version of “Pop Muzik,” excuse me, “Muzika Pop,” and “M Factor,” while the extended version of the hit dominated side B. 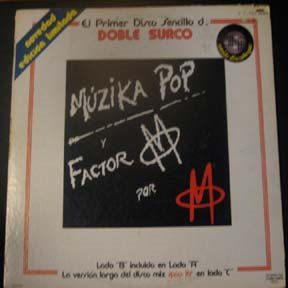 The only previous experience I’d had with that wacky groove trick was with Monty Python’s “Matching Tie and Handkerchief” album, an LP that is actually three-sided thanks to the gimmick, but the M single gave me no warning. I eventually figured it out and then realized that it was written on the jacket and as I don’t speak much Spanish…
Posted by Bunche (pop culture ronin) at Wednesday, October 01, 2008

Do you mean to say that the grooves on the record alternate between two different tracks? Holy crap. How hard do you have to concentrate to drop the needle in the right place?

Things like this are why the psychology of consuming music used to be completely different. You had to really pay attention to handle your LP's, even normal ones. (I'm using past tense because I don't own a turntable.) The process of putting them on the spindle and dropping the needle was a meditative moment. You had to carefully inspect your LP's and use that great-smelling cleaning stuff, following the curve of the grooves. The whole experience was so sensual. You had to handle it like a loved one.

Nobody who's raised on mp3's can possibly be as big a music fanatic as the most dedicated vinyl collectors, I'm guessing.