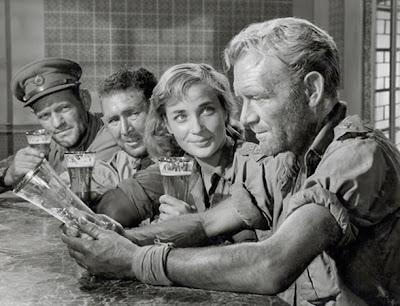 Captain Ansen (John Mills) and cohorts ponder the most hard-won cold brews ever.

I'm not all that keen on war movies as a genre, but when Garth Ennis recommends a particular film as one of the all-time best of its kind I feel inclined to give it a look. The film in question is the 1958 adaptation of Christopher Landon's chronicle of some of his experiences in World War II, ICE COLD IN ALEX, and I'm surprised to say that it comes from out of nowhere to establish itself as my favorite war movie.

The story is a model of simplicity: when the British base at Tobruk falls under siege by German forces, the personnel must evacuate and an ambulance (dubbed "Katy" by its original driver) driven by combat-fatigued borderline alcoholic Captain Ansen (John Mills) must make it's way to safety after becoming separated from its unit. Also on board for the journey are MSM Tom Pugh (Harry Andrews), a pair of nurses (Sylvia Syms and Diane Clare) and a an Afrikaans and German-speaking South African captain (Anthony Quayle) whom they find along the way. The direct route to to their destination, Alexandria, is inaccessible since the bridge leading to it was demolished, so the ambulance must traverse a perilous course across over six-hundred miles of desert, where the characters must contend with heavily-armed Nazi patrols, treacherous mine fields, blistering heat, dwindling rations, fraying nerves and the suspicion that one of them may be a Nazi spy (gee, guess which one). When a bullet claims the life of one of the Brits, Ansen swears off drinking until they arrive safely in "Alex" and belly up to a bar that he knows that serves lager in glasses so cold that you can carve the ice off the surface with your fingernail. So, basically, the guy focuses on a beer as his motivator. There have been times when I could totally relate to that, and when you see what these characters go through you'll need a tall, frosty one yourself, especially after the episodes involving traversing a minefield and getting the overheating ambulance over a steep sand dune. That may not sound like much, but I swear you'll see what I mean.

What makes this movie so enjoyable to me is that it's a WWII flick totally devoid of the jingoistic action figure stereotypes that I so utterly loathe in many films of the genre, and is instead about a group of human beings that the viewer can relate to and root for whether you're into the whole war movie thing or not. Theirs is a journey through a crucible in which, for better or worse, the human spirit and will are tested to their utmost, and even the enemy are portrayed as people who happen to be soldiers and not just a bunch of stock goosestepping drones. And the Nazi spy proves to be not only sympathetic but also quite heroic, contributing hugely to helping in the mutual goal of crossing the desert and reaching Alexandria alive.

Everything about this film works and treats the viewer with intelligence, so I urge you to see it if you get the opportuinty. It's not available on DVD in the States, but it is easily obtainable for those of you who wisely invested in an all-regions DVD player. TRUST YER BUNCHE and seek out this absolute classic.
Posted by Bunche (pop culture ronin) at Sunday, October 12, 2008