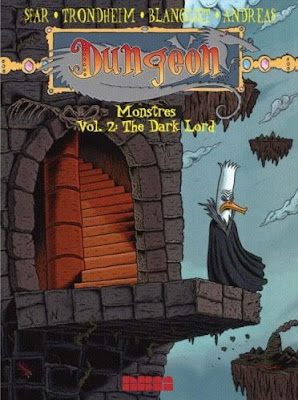 I received this ninth volume of the Eisner-nominated DUNGEON as an assignment for PUBLISHERS WEEKLY and had never heard of the series beforehand, and I must admit I'm intrigued enough to start at the beginning.

This latest collection of the French D & D/heroic fantasy spoof finds the cast dealing with Terra Amata, the landscape where the series takes pace, exploding into a myriad of floating islands that resemble a cartoon version of a Roger Dean Yes album cover. In “The Great Map” Marvin the Red, a red, fanged rabbit hero in an equally crimson suit of armor, is tasked with finding the map of the just-exploded realm, while the Grand Khan, a powerful dark lord who also happens to be a duck, renounces his baleful powers, an act that causes the sundering of their world in “The Dark Lord.” There’s a lot going on in both stories, all of it quite entertaining and very well illustrated; the guest artists acquit themselves nicely, Andreas’ work bringing to mind Sergio Aragones or Stan Sakai, while Stephane Blanquet’s highly appealing style looks for all the world like a fusion of Charles Burns and Gabor Czupo. Great fun, although the curious are advised to pick up the previous volumes as coming in at this point is akin to walking in at chapter eight of a thirteen-chapter matinee serial.
Posted by Bunche (pop culture ronin) at Thursday, October 09, 2008