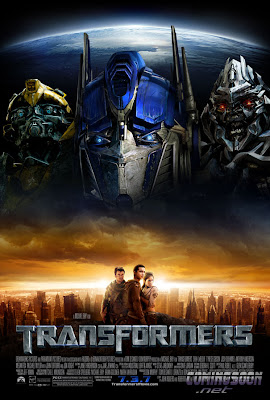 In a climate where Hollywood is willing to lavish huge budgets on adaptations of video games and theme park rides, it was only a matter of time before they got around to giving the big screen, live action treatment to the Transformers, originally a line of shape-shifting robot toys from the 1980's that gained vast popularity and cult immortality via an animated tie-in TV series and a theatrical cartoon feature. Knowing there's a fast buck to be made from cashing in on the nostalgia grownups hold for beloved properties from their childhoods, producer/director Michael Bay struck box office gold last year with this feature starring teenybopper heartthrob of the moment Shia the Beef (as in the fart meaning of "beef" if you ask me). If you've ever seen a Michael Bay movie you know that what he unleashes onto cinema screens are bloated, characterless exercises in sheer, vulgar excess, and TRANSFORMERS follows suit while also following the 1980's template and providing the moviegoer with a nearly two-and-a-half-hour toy commercial.

And just so we're clear on this, let me state right here and now that I was too old for the Transformers when they showed up (I had just begun my second year of college) and wasn't at all keen on them when I found out what they were all about, so I am in no way the target audience for this movie. TRANSFORMERS was its generation's first exposure to Japanese-style giant robot fun and those kids got the added bonus of actually having toys of their TV favorites to play with, something those of us from the GIGANTOR and JOHNNY SOKKO era did not (though the Japanese certainly did), so they have an even deeper investment in their robot heroes by virtue of having been able to craft their own adventures with shapeshifting toys that practically required a degree from MIT to manipulate. So if not for seeing it with the accompanying Rifftrax running commentary by Mike Nelson, Kevin Murphy and Bill Corbett, each an alumnus of the late, lamented MYSTERY SCIENCE THEATER 3000, I would never have been able to sit through this turd, and even then I had to do it over the course of two nights thanks to how apathetic I was toward it.

I won't even bother outlining the particulars of the whole Transformers backstory because it's likely you know all of it already if you're bothering to read this review, so in a nutshell the plot revolves around the good guy Autobots coming to Earth in search of the "All Spark," a cube that can restore their decimated homeworld, Cybertron, and vying for it against the evil Decepticons while Shia the Beef acts as the unwitting liason between humanity and the Autobots while dealing with the fact that his used Camero is actually a transforming robot from another world and simultaneously trying to score some righteous pussy from a tasty, faux-tanned classmate (Megan Fox). There isn't enough actual story to warrant a nearly two-and-half hour running time and when the shape-changing robots finally show up they aren't very interesting, although the one named Jazz managed to both bore and offend because he's voiced as a black stereotype that I can't believe the studios allowed by without so much as a "what the fuck is this shit?" Equally sad and embarrassing is the presence of real actors, namely John Voight and my man John Turturro, both of whom are way better than the material here, so I wonder if they were in deep with the mob or something and needed some hard cash pronto. It especially broke my heart to see Turturro whoring himself out in this travesty, and while I am aware that he's done his fare share of films that have been perceived as shit — YOU DON'T MESS WITH THE ZOHAN being a recent example of this, but I'm one of the vocal few who loved that movie and enjoyed Turturro in it — his participation in such a soulless homunculus of a film is a sad example of a daring actor/writer/director selling out his considerable talents. And he's signed up to be in the sequel, so as John Waters so appropriately asked in PINK FLAMINGOS, "Is there no shame?"

But perhaps the single most odious element in the entire film (after the Beef's funny-as-Dachau "comedic" parents) is the final scene: after the day has been saved and the Beef has won the girl, the two of them are seen making out atop Bumblebee, the Beef's sentient robot car. And as if that's not squirm-inducing enough, they're about to get their adolescent hump on in full view of a bunch of other Transformers who are hanging out on the hill where they're parked. Hey, I can totally understand not giving a fuck where you are when the mood hits you and you absolutely need to get a stinky pinkie or else you'll wither and die, but not in front of an audience! It was just plain creepy, folks, and if I were Bumblebee I'd have taken umbrage at two horny teens possibly smearing DNA and Bartholin's gland fluid all over my hood and possibly scratching my finish with belt buckles, zippers and whatnot as they tore off their clothes in the heat of teenage animal lust.

There are those who are willing to excuse this creatively-bankrupt construct because the paper-thin story is theoretically a showcase for ass-kicking CGI mayhem, but unless handled with an artistry that not only serves the story but brings the viewer into the film's world to such a degree that they totally buy into it, a la the LORD OF THE RINGS flicks, I'm utterly fucking sick of CGI effects. They look far too sterile and pristine to my eye, a taste admittedly forged by the DIY excellence of artisans like Douglas Trumbull, Ray Harryhausen and Eiji Tsuburaya, and the exacting hyper-realism achievable via digital effects points up what Harryhausen once said about about not making his creations look too realistic because that would sacrifice the sense of wonder and the fantastic that he was going for. The effects in TRANSFORMERS are serviceable for the flashy and loud pseudo-thrills it's shilling, failed to engage me any more than a seasonal animatronic display in a shopping mall at Christmastime would have. In short, the entire film was a colossal failure for me, but again I am not its target audience. If you echo any of the sentiments that I hold in regard to the whole Transformers phenomenon, the I'd suggest you TRUST YER BUNCHE and give this one a miss. It's a big fat zero of entertainment, and while it may seem like shooting fish in a barrel, this film is wholly deserving of the slagging that I and others have given it. Even those raised on the Transformers weren't all that into it, as can be seen in the user comments section over at the Internet Movie Database.

Seriously, don't let curiosity get the better of you. Skip this and watch a more entertaining sci-fi flick instead, like maybe PLAN NINE FROM OUTER SPACE. (Yes, I'm serious.)
Posted by Bunche (pop culture ronin) at Tuesday, October 14, 2008

I hate this movie like poison. There was absolutely nothing to distinguish it from any other big budget, soulless Hollywood piece of shit.

I have a theory that boring crapola like this is intentionally jerked out to set the bar so low that a mediocre, yet tolerable, flick like "The Dark Knight" seems like "Citizen Kane" by comparison.

So Michael Bay must have been paid off by "The Dark Knight" producers... Unless he's intentionally making movies this bad, which is an even scarier thought.

The conspiracy is in full swing!

Everyone wins but us.

Both you and John are completely blind.
This movie is great fun. There are some problems (Turturro's role is very bad we are agreed there)
But 1. There totally IS a story, 2. LeBouf is excellent 3. The CGI are about as good as you will EVER see. You actually believe these things are real. Sorry if you can't see through your beloved John Waters glasses. We agree on a great many current hollywood bullshit movies... (both new Batman movies suck ass...boring as HELL) But you are so off-based on this one due to your preconceived hate of Michael Bay (which is NOT unwarranted I agree) and the material itself (remember I hate the transformers toys also)

Sorry...thumbs way down on this review...
I'd rather you had just not seen it...

YOU rather I had just not seen it? How the hell do you think I feel?

HA HA!
I'm just saying...you might as well have watched Bad Boys 2 (and no, I do not advocate that film on ANY level)

No way in hell will I sit through BAD BOYS II, mainly because I loathed the first one. Plus it stole its title from the very good Sean Penn juvenile prison movie from the 1980's.