While contemplating some of the possibilities and adventures that await me during this year's seasonal costumed revelry, I was digging through a shoebox full of old photos and came across some shots capturing the Halloween magic of years gone by. 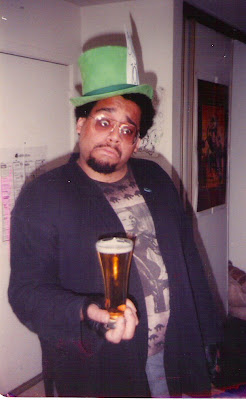 This one dates back to the Fall of 1988 and a party thrown by my younger brethren in SUNY at Purchase's "Beer Police." I was notified of the impromptu bash at the last minute, so I threw together whatever I had lying around and came up with a DOLEMITE-budgeted interpretation of a villain who might have appeared on a blaxploitation version of the Adam West BATMAN show, namely the Bad Hatter. I think the Julie Newmar as Catwoman shirt adds a certain level of post-punk squalor to the whole ensemble. 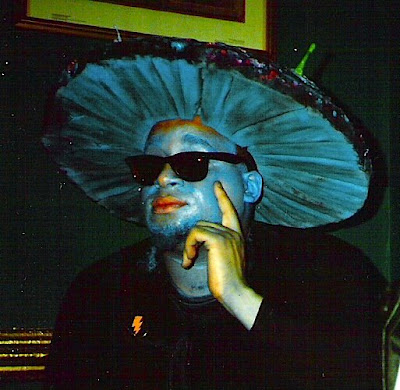 From 1991 comes "the Dark Spore," a Ditko-esque antropomorphic psilocybin mushroom. I made the cap from a piece of bedding foam and coated the top with psychedelic colors atop a black-painted layer of latex that had a terrific texture. 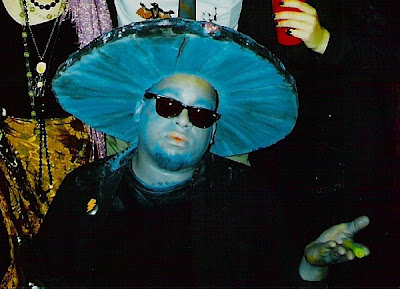 I made sure to get as stoned out of mind as possible to lend the character the appropriate trippy vibe, and if you look close you can see that the mushroom cap is littered with plastic figurines of assorted wizards and monsters, representing hallucinations made manifest. Too bad I didn't invest in a less-smudgy blue pigment. 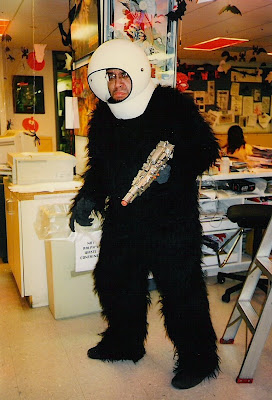 Here's the 1996 Robot Monster outfit that I'll be reviving this year, only with a bit more attention to authentic detail. Kids loved it when I walked the streets of Manhattan in broad daylight with this ludicrous getuo on, and I can't wait to see the reactions twelve years later. 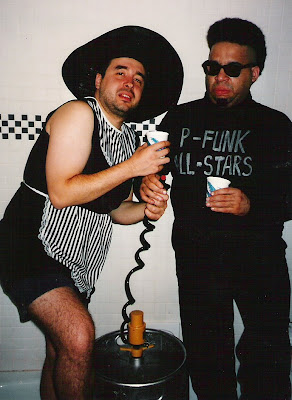 Here's me and Greaseball Johnny at a 1996 Brooklyn shindig. Johnny's "the World's Sexiest Witch" and I was George Clinton; this shot was taken after I removed my bizarre-assed wig and cape and you can't see my silver/turquoise ultra-high top Chuck Taylors thanks to the angle of the camera, so you're forgiven if I don't register as the Funkadelic/Parliament living legend. Man, I miss the days of my fluffy 'Frohawk...

And if any of you have any particularly memorable Halloween costume photos you'd like to share, please send them in! That applies most especially to hot wimmerns ins sexy/skimpy outfits and anyone wearing something utterly ludicrous. Speaking of which: Jared, do you have a shot of "Bat-Pope?" If so, I must run it!
Posted by Bunche (pop culture ronin) at Thursday, October 23, 2008

No Canigula? I wish I still had my Hypno Helmet...

I always thought the Dark Spore was called "The Shroom"... Then again, I probably was not in the best shape for remembering those kinds of things...