Undeniably one of the greatest talents to emerge from the Marvel Comics renaissance of the 1960's was Jim Steranko, a gifted designer/illustrator whose comics biz immortality was ensured by his legendary and rather psychedelic run on NICK FURY, AGENT OF S.H.I.E.L.D. (Note to Marvel newbies: this was back in the days before THE ULTIMATES and the IRON MAN movie, when Fury was a white guy.) A few examples of the eye/imagination candy in question: 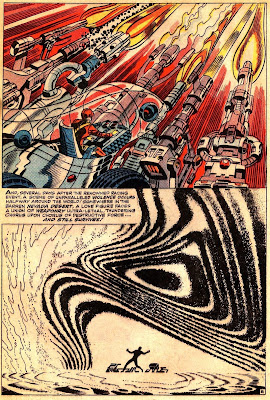 Imagine reading this while dosed out of your mind on some choice LSD when this one hit the newsstands. (I read it in college during the Spring of 1986 while on mushrooms and, hoo-boy, was it a mind-bender!) 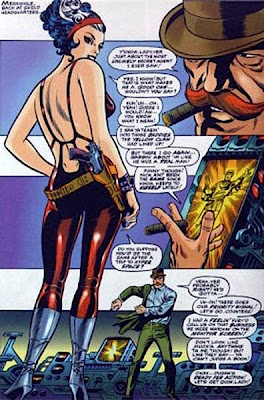 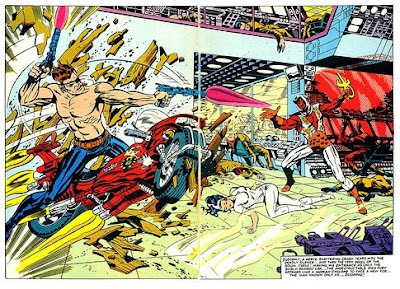 The first half of an audacious four-page (!!!) spread that required the purchase of two copies of the issue in order to see the whole image at once. 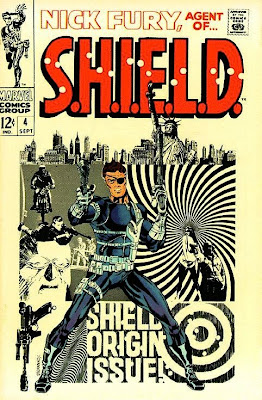 The cover to issue #4 of NICK FURY, AGENT OF S.H.I.E.L.D., a cover that has been repeatedly imitated and parodied, even up to the current day (see below). 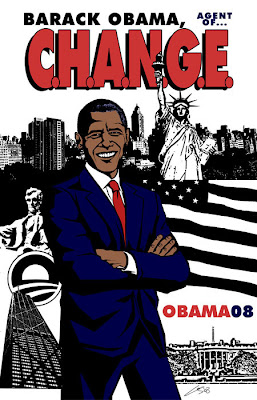 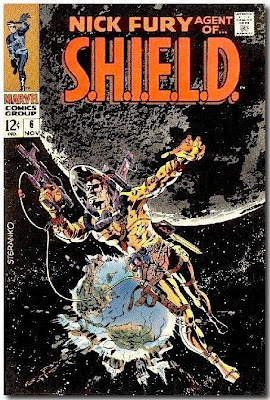 Steranko channeling his inner WEIRD SCIENCE-era Wally Wood, resulting in what gets my vote as one of the top ten comics covers of all time. 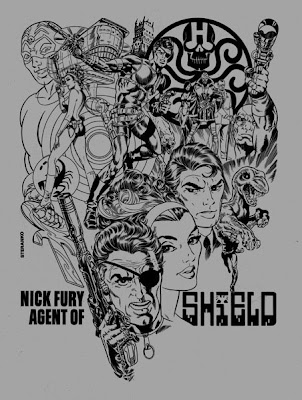 The guy redefined what a comic book page could look like with his innovative designs and later went on to do concept art for RAIDERS OF THE LOST ARK, but what brought him back into my sights was a memory sparked by my ever-burning passion for jungle-girl characters and my recent devouring of some old school SHEENA, QUEEN OF THE JUNGLE reprints. While reading those lurid examples of T&A-driven four-color entertainment I was reminded of a jungle chick piece Steranko did during the mid-1970's and I was dismayed at not knowing its title, thus precluding a precise Google search. Fortunately the Vault is a vast repository of geekish treasures and I recalled that the very piece I was looking for could be found in the pages of an old issue of Steranko's MEDIASCENE magazine, issue #33 to be precise. I dug through my shelves (that are near the point of collapse from the weight of assorted books and comics) and found the issue, a treasury edition-sized "all-art poster special" featuring work by Rudy Nebres, Jeff Jones, Frazetta, and Barry Windsor-Smith among other notables, and thumbed through until I found the piece I'd been thinking of. It's entitled "Queen of a Thousand Kings," and while not Sheena per se, it totally reeks of her archetypal, leopard-clad glory and captures the feel of the genre she spearheaded (sorry, I couldn't resist). 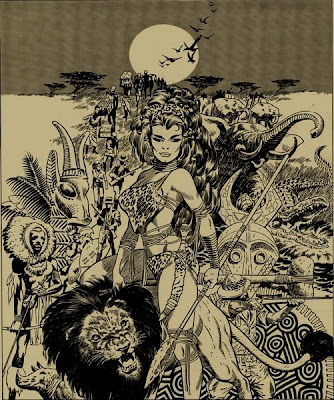 I had it scanned this morning and added a slight sepia tone to give it a slightly-aged feel, then I wondered why it wasn't clearly stated to be a Sheena illustration. To answer that burning question I called up Mark Chiarello, design/illustration badass, world-class comics geek and a Sterankophile of the highest order, and as near as he could figure it was clearly intended as a Sheena piece but not identified as such most likely to skirt the pain in the ass of obtaining the rights to the character. As the whole jungle-girl thing had long ago passed into the pop culture visual lexicon and the badassed white chick in a skin was accepted as conceptual shorthand, why the hell not?

Man, do I wish this would be issued as a poster!
Posted by Bunche (pop culture ronin) at Friday, October 24, 2008

No question Sternako's one of the giants of the industry. I always thought his art tended to be equal parts Kirby and Wood. Not that that's a bad thing...

My gods, that Nevada "onslaught" makes me think of Burning Man! :D

Yeah, Sternako is a god among the geek set, even for those who (shame on them!) don't recognize his name.

And on a semi-related note:

(Did Lois Lane get bitten by a radioactive Bollywood spider or something? This just hurts my brain...)