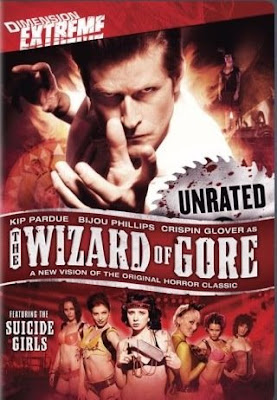 Just by existing this remake of splatter/gross-out pioneer Herschel Gordon Lewis' 1970 homicidal stage magician opus is light years ahead of its predecessor in every aspect of filmmaking, but it's still no great shakes.

Once I heard someone had unleashed a remake of Lewis' "classic" I was intrigued to see what could be done with a modern take on Lewis' concept of a crazed Doug Henning type who horribly mutilates beautiful women during his act and reveals them to be apparently unharmed when all is said and done, only to have them turn up dead a day or two later suffering from the very wounds that were supposedly stage illusions. Considering how generally shitty contemporary horror offerings are in general and the remakes in particular, I suppose I should have expected what I got, namely a would-be shocker by way of murky MTV-style visuals and a gore/violence quotient that was surprisingly restrained for an unrated movie. This version gives us a douchey trust-fund kid who fancies himself a journalist who chronicles the seamy underbelly of L.A. (translation: "slumming"), frequenting strip joints and the like, much to the dismay of his girlfriend. One night the two of them attend a sleazy adult amusement boardwalk, replete with all manner of nekkid chicks engaged in just about everything you could get away with in public without getting busted, and wander into a performance by Montag the Magnificent (Crispin Glover, playing it far more normal than one would expect, which is kind of a bummer). The show features the aforementioned onstage torture, mutilation and dismemberment, and if you're a seasoned gorehound the proceedings will barely register if you've seen anything as "hard" as the original DAWN OF THE DEAD or worse. Fascinated by what he's witnessed, the so-called journalist returns night after night and soon ends up spiraling down a psychedelic mindfuck trail to mind-controlled madness as the bodies of Montag's victims start to pile up.

To which I say a big "who gives a shit?" I was bored about a half hour in, and I only stuck with it to the end in order to see if anything of real interest happened, and I can assure you nothing did.

Bottom line: unless you have absolutely nothing to do I would advise giving this a miss and renting something far better, like the unrated versions of THE MIST and THE RUINS. Although, to be fair, THE WIZARD OF GORE remake is better than Rob Zombie's abortion of a HALLOWEEN redo, but that's not saying very much.
Posted by Bunche (pop culture ronin) at Saturday, October 04, 2008

I was just telling a friend how bad the original is...being a Crispin Glover (not that he's done that many good films--I just like his weirdness) fan, I'm sure I'll check this out...Totally agree on The MIst and The Ruins...both EXCELLENT new 'horror' movies... (I kind of like Dead Silence too!)