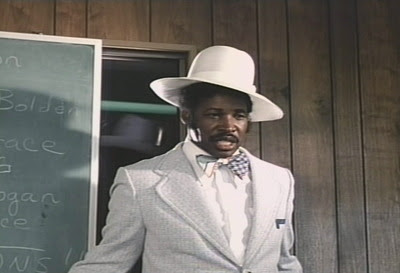 Rudy Ray Moore as Dolemite.
One of America’s greatest cult figures has joined the Choir Invisible, yet I’m not saddened in the least by that news because his well-crafted alter ego virtually erased the mortal man behind what amounted to a gleefully obscene cartoon character. Yes, Rudy Ray Moore is dead at eighty-one, felled by complications from diabetes, and if you said his name aloud the average civilian would ask the simple question “Who the fuck is Rudy Ray Moore?” One simple word answers that query: Dolemite. 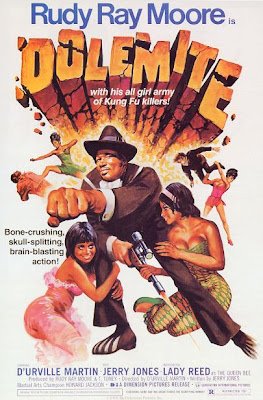 Original theatrical release poster for the epochal DOLEMITE (1975). Gotta love the positioning of his rifle.

Yes, friends, Dolemite, the rhyming standup comedian, inexhaustible sex machine, peacock-wardrobed money-makin’ pimp and martial arts master who out-blacked even the most Negrotudinous of the blaxploitation-era he-men and described himself thusly:

Dolemite is my name, and fuckin’-up muthafukkas is my game! I’ve got an all-girl army that knows what to do. They foxy as hell and practice kung-fu! I put my finger in the ground and turn the whole world around! Yes, I’m Dolemite. I’m the one that killed Monday, whupped Tuesday and put Wednesday in the hospital! Called up Thursday to tell Friday not to bury Saturday on Sunday! I’m the one that had the elephants roostin’ in trees and all the ants wearin’ BVD’s! From the first to the last, I give ‘em the blast so fast that their life has passed before they even hit the grass! See me uptown, downtown, crowned and renowned! Delayed, relayed, mislaid and parlayed! Hatched, matched, snatched and scratched! Whacked, jacked, smacked, cracked, boot-blacked, blackjack, racetrack, and flapjack, and still comin’ back! I used an earthquake to mix my milkshake! I eat an avalanche when I want ice cream! I punched a hurricane and made it a breeze! I swallowed an iceberg and didn’t freeze! I chained down thunder and handcuffed lightning! I’m so damn strong, it’s sometimes frightening! I grabbed a star traveling a million miles a minute and slowed it down to the state speed limit! I may not be sleek, but women shriek when they see my physique! I got a dong as big as King Kong! (Speech culled from the trailers to DOLEMITE and THE HUMAN TORNADO)

After hearing all that, doesn’t “faster than a speeding bullet” seem a tad feeble by comparison?

Sure he got his start as an R&B singer and “blue” standup comedian, later dubbing himself “the Godfather of rap” for his legendary ability to pull rhymes out of his ass, but Rudy Ray Moore’s immortality was sealed by his two Dolemite movies, DOLEMITE (1975) and THE HUMAN TORNADO (1976), as well as PETEY WHEATSTRAW: THE DEVIL’S SON-IN-LAW (1977) and DISCO GODFATHER (1979) are monuments to the art of wretched filmmaking, the crap cinema equivalents to the pyramids at Giza, yet each one is a treasure to bad movie mavens around the globe. I've seen 'em all and the one that remains dearest to my heart is THE HUMAN TORNADO, also known as DOLEMITE II and in every way a vast improvement over the unmitigated amateur hour that was its predecessor. 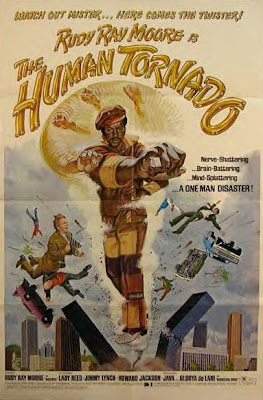 Director Cliff Roquemore, who helmed PETEY WHEATSTRAW: THE DEVIL'S SON-IN-LAW with equal verve, injects life (and good pacing) into Dolemite's world for this sequel and renders it as a raunchy live-action cartoon. Everything that was already outrageous in DOLEMITE is here turned up to eleven, creating an avalanche of potty humor, immeasurably-foul dialogue, ridiculous sex scenes, insane musical numbers that just happen from out of nowhere ("Angels of the World," featuring "Mister Motion" Jimmy Lynch in a red over-the-shoulder one-strap bell-bottomed jumpsuit, one huge sparkly cuff and no shirt must be seen to be believed), the worst martial arts sequences in recorded history, a gay character of unprecedented stereotypical magnitude (who utters what may be the funniest line in the entire movie), gratuitous nudity and violence, and even a Mafia torture dungeon presided over by an over-the-top cackling loony who looks like Witchie-Poo's criminally insane sister. I know both films are unmitigated pieces of shit, but how anyone could pick DOLEMITE over THE HUMAN TORNADO for sheer entertainment is completely behind my powers of comprehension. Seriously, I love THE HUMAN TORNADO so much that it's one of three genuinely terrible movies that would survive the culling if I had to rid my collection of all but ten films (for the record, the other two favorite turds are SORCERESS and DEATH WISH 3 ), so if you must see only one Rudy Ray Moore movie that's the one I would recommend.

So rest well, Mister Moore. You were one funny muthafukka, and I ain't lyin'!

Rudy Ray Moore, the self-proclaimed "Godfather of Rap" who influenced generations of rappers and comedians with his rhyming style, braggadocio and profanity-laced routines, has died. He was 81. Moore, whose low-budget films were panned by critics in the 1970s but became cult classics decades later, died Sunday night in Toledo, Ohio, of complications from diabetes, his brother Gerald Moore told the Associated Press.

Though he was little known to mainstream audiences, Rudy Ray Moore had a significant effect on comedians and hip-hop artists. "People think of black comedy and think of Eddie Murphy," rap artist Luther Campbell of 2 Live Crew told the Miami Herald in 1997. "They don't realize [Moore] was the first, the biggest underground comedian of them all. I listened to him and patterned myself after him." And in the liner notes to the 2006 release of the soundtrack to Moore's 1975 motion picture "Dolemite," hip-hop artist Snoop Dogg said: "Without Rudy Ray Moore, there would be no Snoop Dogg, and that's for real."

When it came to his own sense of his accomplishments, Moore was never burdened by immodesty. "These guys Steve Harvey and Cedric the Entertainer and Bernie Mac claim they're the Kings of Comedy," Moore told the Cleveland Plain Dealer in 2003. "They may be funny, but they ain't no kings. That title is reserved for Rudy Ray Moore and Redd Foxx." The heyday of his fame was in the 1970s, with the release of "Dolemite" followed by "The Human Tornado," "Petey Wheatstraw: The Devil's Son-in-Law" and "Monkey Hustle."

The way Moore told it, his introduction to Dolemite came from an old wino named Rico, who frequented a record shop Moore managed in Los Angeles. Rico told foul-mouthed stories about Dolemite, a tough-talking, super-bad brother, whose exploits had customers at the record shop falling down with laughter. One day Moore recorded Rico telling his stories. Later Moore assumed the role of Dolemite, a character who became the cornerstone of his decades-long career as a raunchy comedian, filmmaker and blues singer. "What you call dirty words," he often said, "I call ghetto expression."

But long before "Dolemite" debuted on theater screens, Moore had found fame -- and fans -- through stand-up routines and a series of sexually explicit comedy albums. Not only were the album contents raunchy, the album covers featured women and Moore nude and were too racy for display. So store clerks kept the albums under the counter. Without airplay or big-studio promotion, the so-called "party records" were underground hits. "I put records in my car and traveled and walked across the U.S. I walked to the ghetto communities and told people to take the record home and let their friends hear it. And before I left the city, my record would be a hit. This is how it started for me," he told the St. Louis Post Dispatch in 2001. Although his contemporaries, such as comedians Foxx and Richard Pryor, managed to find success with a broader audience, Moore's stardom was bounded by the geography of race and class: He was a hit largely in economically disadvantaged, African American communities.

According to his website, Moore was born in Fort Smith, Ark., on March 17, 1927. In his youth Moore worked as a dancer and a a fortune teller and he entertained while serving in the U.S. Army. But his big break came with the recording of his Dolemite routine: Dolemite is my name/And rappin and tappin/ that's my game/I'm young and free/ And just as bad as I wanna be. By the time Dolemite appeared on film, he was the ultimate ghetto hero: a bad dude, profane, skilled at kung-fu, dressed to kill and hell-bent on protecting the community from evil menaces. He was a pimp with a kung-fu-fighting clique of prostitutes and he was known for his sexual prowess.

For all the stereotypical images, Moore bristled at the term blaxploitation. "When I was a boy and went to the movies, I watched Roy Rogers and Tim Holt and those singing cowboys killing Indians, but they never called those movies 'Indian exploitation' -- and I never heard The Godfather called 'I-talian exploitation,' " he told a reporter for the Cleveland Scene in 2002.

Late in life, Moore saw his work win fans far beyond his African American audience. There is a "Dolemite" website and chat room that boasts a cross-cultural collection of young fans. Such interest won him mainstream work in an advertisement for Altoid Mints and a commercial for Levis jeans.

Though Moore built a career on talking dirty, he was very religious. He took pride in taking his mother to the National Baptist Convention each year, and often spoke in church at various functions. He rationalized his role as a performer. "I wasn't saying dirty words just to say them," he told the Miami Herald in 1997. "It was a form of art, sketches in which I developed ghetto characters who cursed. I don't want to be referred to as a dirty old man, rather a ghetto expressionist." 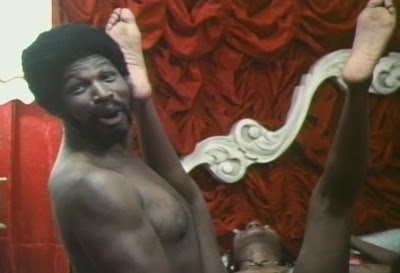 I was first introduced to Dolomite twenty years ago thanks to our local video store. The staff would put little index cards with guides to special movies on the shelf, and the one for Dolomite said simply:

I had to rent it with that tag line, and I'm not sorry I did. Sorry to see the big guy go.

"Starring me, Rudy Ray Moore as Dolemite... and that baaaad Durvil Martin as Willie Green"

If there was a better trailer for any film, I haven't seen it. Rudy is the Godfather of everything baaad... and he'll be missed at every Hustler and Pimp Convention for ever.

The line of his that stuck in my head was "Bitch, are you for real?"

Rumor has it that a remake of Dolemite is in the works with LL Cool J in the lead role..not sure how I feel about that.
Plus part of the charm was that he wasn't really buff.

P.S. Didn't the chef that took over after you at Bar BQ kind of look like LL? He even licked his lips ha