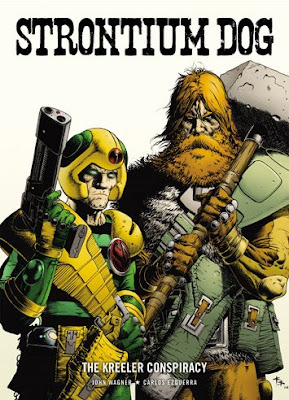 There are those who were drawn to Britain's 2000 A.D. weekly sci-fi anthology comic during its prime (roughly 1978-1983) thanks to the popularity of the magazine's flagship character, Judge Dredd, but what hooked me was a recurring strip with the bizarre title of STRONTIUM DOG , featuring the "Spaghetti Western in space" adventures of grim mutant bounty-hunter Johnny Alpha and his partner Wulf Sterhammer, a hulking time-displaced Viking warrior. Their jobs took them all over a far-flung galaxy and through time itself — in one memorable case they pursued Adolf Hitler — and their testosterone-glutted exploits were perfectly offset with an appropriately quirky sense of humor. Created by writer John Wagner and artist Carlos Ezquerra, STRONTIUM DOG was a series to be reckoned with when it was firing on all cylinders, frequently coming in second only to JUDGE DREDD in the reader's popularity voting, debuting in 2000 A.D.'s sister comic, STARLORD, in 1978 and taking up residence in Two-Thou when that mag got canceled, remaining a mainstay until 1990 when Wagner decided to kill off Johnny Alpha. Ezquerra refused to draw the death of the mutant hero, which resulted in what was at the time the final STRONTIUM DOG arc being handled by other artists (the less said about those sorry efforts the better). Eventually Wagner realized he must have been out of his fucking mind to snuff a great character and a terrific series in the process, so he rebooted STRONTIUM DOG in 1999 with Ezquerra back and in fine form, setting the new series before Johnny's death and passing off much of what came before as "folklore." The new series of STRONTIUM DOG still retained its signature tone, but it had also grown up in much the way 2000 A.D. itself had, offering a more adult edge to its heroes' tales and adding elements of mild sex to quell longstanding charges that Johnny and Wulf were actually star-hopping homosexuals (that angle had been attempted without much success in the original series with the murder of Wulf and the introduction of the textbook assembly line sexy vampire, Durham Red, who spun off into her own rather dull strip). Jeez, just because two manly men buy a house together on some secluded colony planet...

Titan Books has been releasing many of the classic 2000 A.D. series — including JUDGE DREDD, ROGUE TROOPER, NEMESIS THE WARLOCK, SLAINE and NICOLAI DANTE among others — in thick and sturdy editions, and following the complete run of the original STRONTIUM DOG (five volumes) comes the first of the reboot collections, THE KREELER CONSPIRACY, and it's a hell of a lot of fun, more than making up for the awful previous Ezquerra-less volume. This latest book contains "The Kreeler Conspiracy" (the power of which stems from the events chronicled in Volume 2's "Portrait of a Mutant," a multi-part epic of family dysfunction, ethnic hatred, genocide and guerrilla violence that's one of the best origin stories on record, IMHO), a trip to a backwater artists' colony that leads Johnny and Wulf to an inescapable and deadly "Roadhouse," and "The Tax Dodge," in which Johnny's refusal to pay his considerable back taxes (a sum he feels no obligation to pony up because the government of Earth declared him an exile in years previous ) brings him to the attention of Earthcom Internal Revenue and persistent collections agent Orville J. Paxman.

While not as good as the stuff from STRONTIUM DOG's glory days, the material here earns a solid eight out out of ten and that's pretty good , especially when stacked up against much of the other stuff 2000 A.D. was turning out at the same time. I recommend it, but urge you to check out the first four collected volumes, especially Volume 2, before cracking open THE KREELER CONSPIRACY.
Posted by Bunche (pop culture ronin) at Wednesday, October 29, 2008