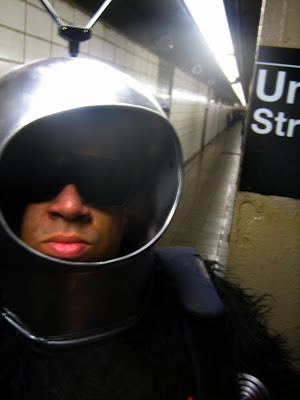 I awoke this morning at 7AM, giddy as a child on Christmas morning, and looked over at my limp and vacant Ro-Man costume, my head filling with probable crazy scenarios for this glorious day's adventures to come. I had plenty of time for the "three esses" — shit, shower and shave — and once the morning ablutions were complete I donned my tatty alien invader garb and set off for work. The subway ride provided my fellow passengers with an amusing distraction from the lurid headlines of the Post and Daily News and I was only too happy to oblige. Once leaving the subway and returning to the world above ground I was shocked to see only one costumed person on the street other than myself, but at least it was a dude rocking a pretty decent Don King. 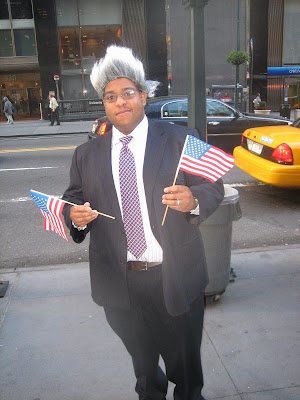 At the design 'ho house there were a couple of people in costume and I'll get to them in a subsequent post, but the one standout getup has to go to Phil, the self-described "stuck-up sales guy," as Flavor Flav. It's genius in the first place, but the fact that it lacks any form of blackface "corking up" sends it over the top into the realm of the extra-stupid. Well done!

So tonight I'll be hooking up with Jared for the annual photo safari, and as of last night I got word that we'll probably be joined by my old pals Jimmy and Amanda, so it's gonna be a blast!

Oh, and when did they start making window display manikins with racks like that seen here on Catwoman? 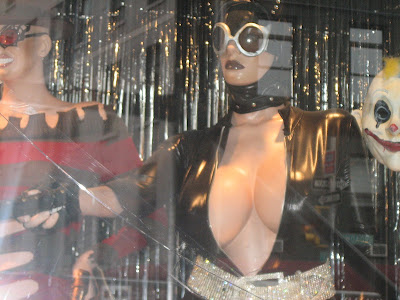 That would be one of the manniquens marketed to the adult fashion trade (Fredricks, Hustler, and your friendly neighborhood sex toy/ fetish shop). For better and worse, erotoca/porn is mainstream enough to make those "stacked" creations a viable part of the clothing industry. :)