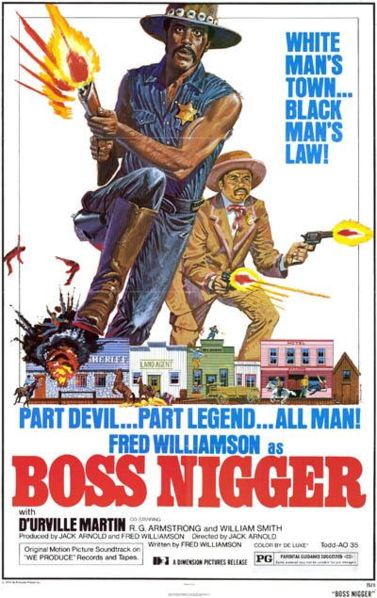 Finally available in a legitimate DVD release, 1975’s BOSS NIGGER has (as previously bitched about on this here blog) indeed been retitled as the far more P.C. “BOSS,” but I’m happy to say that title is purely for the purposes of display on store shelves. The film itself has been altered in no way whatsoever, preserving both the title and the infamous theme song — sing along, kiddies: “They call him Boss…Boss Nigger!!!” — but introduced with the following disclaimer by writer/star Fred “The Hammer” Williamson himself:

In 1972 I had just completed “The Legend of Nigger Charley” and “The Soul of Nigger Charley.” I made this sequel that you are about to see. I used the “N” word to create sensationalism at the box office, and all three films were a success.

You have to remember that all who used that word against me in those films regretted it.

Enjoy the movie. I approve the title and the song with the dialogue intact.

I’ve previously railed against the perceived need to retitle the film and am glad to see the film itself left as it was originally seen, but in this climate where the word “nigger” is nearly ubiquitous in popular rap music (enjoyed across every ethnic group) and just about any R-rated film featuring black men, I find the need for any kind of disclaimer, even one so obviously well-intentioned, kind of ridiculous. Plus the film went out as BOSS NIGGER thirty-three years ago without apology, but whatever; those were the days when Richard Pryor won a Grammy for an album entitled “That Nigger’s Crazy” and no one batted an eye, so different time, different mindset I suppose.

BOSS NIGGER has been somewhat rightly described as BLAZING SADDLES without the comedy, and that’s true up to a point but not wholly accurate as the film is an uneven (though entertaining) blending of straight Western tropes and a tongue-in-cheek attitude. Bounty hunters Boss (Williamson, whose character’s surname is never revealed, it's a good bet it probably isn’t “Nigger”) and Amos (D’Urville Martin, perhaps best known as villain Willie Green in the first DOLEMITE flick) ride into a remote town and set themselves up as sheriff and deputy — much to the open consternation and disapproval of the townspeople —, knowing that wanted outlaw Jed Clayton (William Smith, also known as Conan the Barbarian’s sword-making dad) and his gang of marauding assholes/rapists/thieves are holed up somewhere nearby. Unbeknownst to the townsfolk, the crooked mayor (R.G. Armstrong) is sort of in cahoots with Clayton (it’s never made clear just what the mayor gets out of this arrangement other than not being rendered suddenly dead), and the entire town are such a bunch of pussies that even though they considerably outnumber the outlaws and apparently possess weapons and ammo they do nothing whatsoever to stand up for themselves, allowing the bad guys to ride into town and rape and pillage like the bandits in SEVEN SAMURAI, so it’s up to Boss and Amos to do it for them.

When not killing, jailing or generally humiliating Clayton’s thugs, Boss and Amos (especially Amos) enthusiastically enforce laws they make up on the spot, ordinances such as use of the “N” word or general rudeness directed at either of them being punishable by a twenty-dollar fine or two days behind bars and other such similar penalties, leading to what amusingly amounts to an endless source of cash for the two bounty hunters. Between clashes with assholish white folks and the stereotypical outlaw contingent, our heroes prove to be champions of the local downtrodden (translation: Mexicans) and find themselves on the receiving end of the attentions of a variety of interested females (Amos is pursued by a horny Mexican washerwoman whom he defended from abuse by rednecks the second he entered town, while Boss is fancied by two lovelies: a cute black chick whom he and Amos rescued from bushwhackers, and the local school marm, a white chick whose bloomers become quite humid at the sight of the stylish and handsome black-clad gunfighter). But all good things must eventually come to an end and the end here comes when Clayton finally gets off his ass and takes the fight to Boss, first by running over with a horse a Mexican child Boss had saved from starvation, then kidnapping (and raping offscreen) the cute black chick, and lastly by ambushing Boss, beating the shit out of him while he’s held in place by some henchmen and tying him to a post in the full-on desert heat. Amos rescues Boss and the cute black chick and takes them back to town for a brief rest before the inevitable showdown with Clayton, and when that final battle arrives the next morning the town becomes a low budget would-be Peckinpah-esque shootout, resulting in heaps of bodies before our heroes take possession of Clayton’s corpse and ride off to turn it in for a hefty bounty.

Directed by Jack Arnold — who, believe it or not, also helmed IT CAME FROM OUTER SPACE, CREATURE FROM THE BLACK LAGOON, RETURN OF THE CREATURE, TARANTULA, THE INCREDIBLE SHRINKING MAN, MONSTER ON CAMPUS and HIGH SCHOOL CONFIDENTIAL, just to name a few —, BOSS NIGGER is a decent enough Western that greatly benefits from Fred Williamson’s trademark cooler-than-polar-bear-shit personality coupled with a wry sense of humor and genuine acting chops, aspects that endeared him to genre fans from the second he hit the movie screen and set him apart from many of the leading men who were his contemporaries; Richard Roundtree, Ron O’Neal and Jim Kelly were all fun presences, but there was only one Fred Williamson and those of us who appreciated his work knew we were on to something unique and consequently his legend endures with a tenacity that few, if any, can match. In BOSS NIGGER he offers a reality-based analog to Cleavon Little’s fully-humorous Sheriff Bart in Mel Brooks’s BLAZING SADDLES and he’s a pleasure to watch as he outmaneuvers his adversaries and takes no shit from anybody, ably assisted by the late D’Urville Martin who takes what could have been a huge zero of a sidekick role and milks it for all it’s worth, playing ex-slave Amos as both capable and dependable while displaying undisguised glee at flagrantly fucking with obnoxious white people. (NOTE: there are some nice white people in the town and they do not get the treatment from Boss and Amos.)

Other than the occasional lapse into pacing more suited for a B-grade TV show (which is unsurprising as Arnold did a lot of TV work), the only thing that annoyed me about BOSS NIGGER was its soundtrack, a wildly inappropriate and strictly by the numbers generic blaxploitation score heavy with “wakka jawakka” electric guitar, and its lazily-written themesong that comes off more as a list of the hero’s attributes than an actual song, and the sumbitch doesn’t even have the decency to rhyme. But if that’s the only gripe that I can voice about this blaxploitation Western — other than it being PG-rated and not the R that would have allowed it to go totally apeshit with graphic violence, sex, cussing and the general sleazy offensiveness that made blaxploitation flicks so much fun in the first place —, it’s a small quibble indeed, so TRUST YER BUNCHE and give the long-unseen BOSS NIGGER (or BOSS, if you insist) a shot. 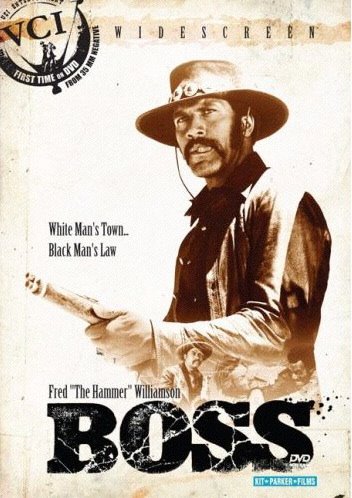 I would argue that it's totally appropriate for the whole sordid affair... It's completely out of place in a western and it's low-grade production values match the movie to a tee!