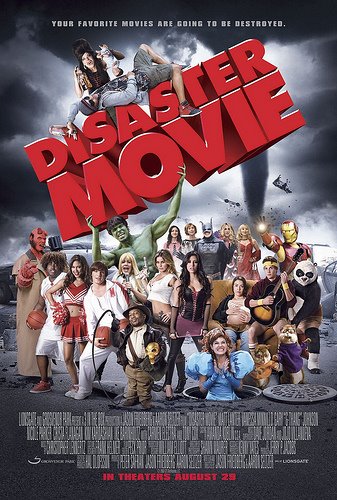 Sweet ass-fucking Jesus... Was this foreseen in the Book of Revelations?

Is child molesting funny? No. Was the Holocaust funny? Nyet. Was chattel slavery a laugh riot? I say thee nay. Is ovarian cancer a gut-buster? Um, nope. To this list of things that are in absolutely no way funny you can now add DISASTER MOVIE, a "comedy" completely and utterly bankrupt of any and all elements that go into what is considered humor. Compared to what DISASTER MOVIE has to offer, the feeblest of "knock knock" jokes looks like BLACKADDER III by comparison. 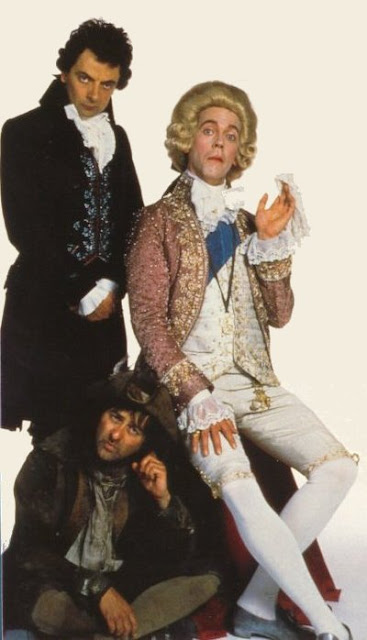 No lie, DISASTER MOVIE is a film so awful that while enduring its cornucopia of wretchedness you may find yourself wishing you were stuck in a maximum security prison, sucking the dicks of hulking prisoners named D-Cell and Stab Wound instead.

Brought to us by writer/director team of Aaron Seltzer and Jason Friedberg, the same creatively bankrupt purveyors of garbage who gave the world the unwanted cinematic landfill that was DATE MOVIE, EPIC MOVIE and MEET THE SPARTANS, this so-called film hinges its avalanche of point-and-click references — they are most certainly not jokes — on the world coming to an end unless the Crystal Skull (yes, that Crystal Skull) is returned to its sacred altar. That’s literally all the explanation we get before we’re off on an endless, numbing parade of sub-'70's era CRACKED MAGAZINE “parodies” of all the recent movie blockbusters and potshots at random pop culture figures, about .02% of which elicited a smile from me, much less an actual laugh. There is no script to speak of, the unfortunate cast instead finding themselves in a celluloid bedlam that reels off like the stream of consciousness ramblings of a Richard Roeper on a heavy dose of some seriously bad Mexican cough syrup chased with a bottle of window cleaner. Among the multitude of films, characters and personalities to receive a nod are:

• JUNO (the mocking of which provided the only moments of genuine humor in the entire movie, which amounted to about forty seconds of material out of a total of ninety minutes)
• 10, 000 BC
• WANTED
• INDIANA JONES AND THE CAVE OF THE CRYSTAL SKULL
• HIGH SCHOOL MUSICAL
• IRON MAN
• THE INCREDIBLE HULK
• SUPERBAD (a year late)
• CLOVERFIELD
• YOU DON'T MESS WITH THE ZOHAN (an admittedly stupid/silly comedy that was 500,000 times better than DISASTER MOVIE)
• HANNA MONTANA
• ARMAGEDDON (a film that while terrible is nowhere near the same galaxy of awfulness as DISASTER MOVIE)
• Amy Winehouse as a sabretoothed tiger (don't ask)
• HANCOCK
• SEX & THE CITY (with Sarah Jessica Parker played by a man; sadly, that gag kind of worked)
• AMERICAN GLADIATORS
• Flavor Flav, nude, Viking-helmeted and with that big-assed clock obscuring his junk (thank the gods)
• JUMPER
• THE CHRONICLES OF NARNIA: PRINCE CASPIAN
• TWISTER (at least a decade too late for anyone to care)
• HELLBOY II
• ENCHANTED
• NIGHT AT THE MUSEUM
• STEP UP (1 and 2)
• GET SMART
• ALVIN AND THE CHIPMUNKS (doing death metal, which was almost funny in concept)
• BATMAN (in general, not even specifically THE DARK KNIGHT)
• SPEED RACER

Each and every one of those were clearly identifiable to anyone who hadn’t been an expatriate on the planet Mongo for the past twenty years, but rather than have faith in the fact that the audience knows what they obviously came and paid actual money to see, the filmmakers — bile churns within me as I use that word to describe those no-talent ass-clowns — feel the need to have the protagonists explain the alleged gags for the moviegoers, thus proving that they have no respect whatsoever for the viewer’s intelligence. For example: when the Flavor Flav impersonator pops into frame and lets loose with the expected “Yeah, boyeeeeee!” coonery, the protagonist exclaims, “Flavor Flav?” Another case in point: during the 10,000 B.C. segment, an Amy Winehouse lookalike (with sabretooth tiger fangs, remember) is greeted by the protagonist (in caveman drag) with, “Amy Winehouse?” If you think that’s both feeble and annoying, try sitting through ninety minutes in which about 99% of the visual references are verbally spelled out to you like you were as dumb as a burlap sack full of doorknobs. Compound that with the now-ubiquitous and nigh-incalculable uselessness of Carmen Electra and you have a cinematic attempt at comedy that’s about as funny as the rape of the Sabines, medieval torture upon pregnant “witches,” the Tuskegee Experiment, the My Lai massacre, and the entire run of ACCORDING TO JIM all rolled up into a humor-leeching black hole of Stygian suckhood. Yet people keep flocking to this team’s tripe with every new release and the films make money because they’re so fucking cheap to make that they recoup their costs within maybe two weeks through domestic ticket sales. I have no idea how these films do overseas but any money raked in from foreign countries is strictly gravy. So as long as the American public keeps on shelling out cash to see this shit, the colossal anus of the Friedman-Seltzer monster will just continue to defecate onto movie screens in multiplexes across this fair nation.

As I write this there are 137 user comments relating to DISASTER MOVIE on the IMDB (to which I will shortly add my own) and I believe it may be the only film on Rotten Tomatoes to score a 00% rating, a perfect storm of utter worthlessness. The horrendous MEET THE SPARTANS and EPIC MOVIE both garnered a 2% rating, while DATE MOVIE got 6%, so if you’ve seen any of those flicks you know just how wretched they are. Think about just how much it takes to earn a rating of 00%. That’s motherfucking ZERO PERCENT! Even GIGLI managed a six, for fuck’s sake!

TRUST YER BUNCHE and avoid DISASTER MOVIE at all costs, unless, like me, you just cannot help yourself and you absolutely have to see for yourself what is a strong contender for the title of WORST MOVIE EVER MADE. Those smug bastards who award that honor to Ed Wood’s far, far superior and immeasurably more entertaining PLAN NINE FROM OUTER SPACE —a film released almost fifty years ago for about as much money as one would spend on an egg roll and some chicken fried rice — really need to shut the fuck up and try sitting through the cinematic Chernobyl of DISASTER MOVIE. Then we’ll see who’s laughing.

Oh, and for the record, I did not pay one cent to see this film. Let’s just say I have connections and leave it at that.
Posted by Bunche (pop culture ronin) at Wednesday, October 08, 2008

These celluloid turds continue to make money, otherwise the studios would stop shitting them out.

The jokes are spelled out to the audience for the exact same reason that these "films" are profitable. Because people are too stupid to know any better.

I'm still waiting for someone to make "ASS", maybe in 3-D, on the IMAX screen.

Anyone who doesn't get that reference, please rent (or purchase) "Idiocracy" immediately.

do you know how i can download the full movie online?
here my email address: bonjorno@ymail.com

Now you've got me intrigued....

I will see this.

Just to see if it's on the level of such cinematic abortions as "Tarzan The Ape Man" (The Bo Derek version, of course), "Destiny Turns on The Radio" and "Surf Nazi's Must Die" - three movies that, off the top of my head, might be the most boring films ever made.

I've seen all three of the movies you've cited and they are indeed both bad and boring. That said, DISASTER MOVIE is utterly, utterly terrible but it in not boring (nor is it particularly interesting)and that's the sole thing it has going for it. But believe me when I tell you just how fucking balls-out bad it is.