THE HOT BABES OF HORROR: LOTA THE PANTHER WOMAN 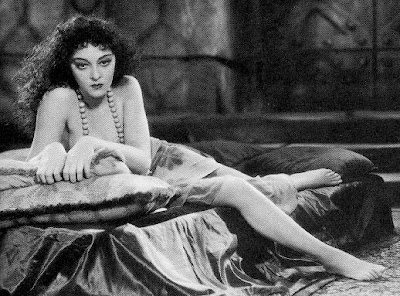 Poor, abused Lota (Kathleen Burke).
The creepily twisted horrors found in 1932's delirious ISLAND OF LOST SOULS have been discussed here on the Vault at length, but I had to give props to Lota (Kathleen Burke), an innocent panther that was altered into a human form and intended for her creator's most vile and questionable experiments. In short: the sicko wanted to see if she could successfully mate with a human castaway and produce offspring.

Okay, kids, all together now: Eeeeeeeeeeeew!!!

When introduced to the bland castaway, the sad-eyed Lota’s curiosity is piqued and it’s quite obvious that she’s attracted to the guy, but even though the script manages to get away with planting the concept of inter-species humping within our heads, it was still 1932 so there was simply fucking way that the movie would go all the way (so to speak) with that element (one of several plot points that got the film banned in the UK for nearly twenty-five years). That hitch was solved by having Lota and the castaway getting very close, the sexual tension building to an uncomfortable level (he’s engaged to be married, but when on an uncharted tropical island and some hotness in a sarong throws herself at you…), only to be defused and carried into another area of horror altogether as the guy notices the sultry beauty’s hands and has a bit of a freakout. 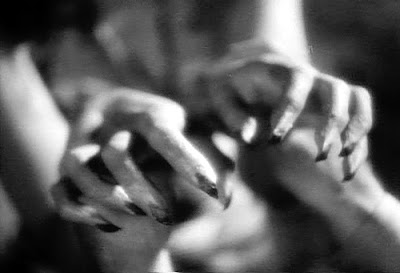 Lota's animal gentics revealed.
Despite Dr. Moreau’s considerable (if admittedly fucked-up) surgical skills, Lota’s once-dainty mitts have begun to revert to sharp, ghastly claws, jarringly blowing her fully human aspect to smithereens, so upon seeing them Moreau declares that he’s taking her to his lab, charmingly known to all of his altered-from-bestial children as the “House of Pain,” in order to “burn out” what remains of her original traits. It’s at this moment when we realize Lota’s tentative (though nonetheless sexy) demeanor stems less from her once having been a full-blown panther, but rather from a wholly understandable and deep-seated fear of the unimaginable, probably anesthesia-free tortures she endured at her “father’s” hands on the long, hard road to Homo Sapiens. And once the rest of the animal-men on the island finally get fed up with not only the medical torture but also their status as unnatural “things,” the whole place goes to hell in a handbasket, with things ending quite badly for the island’s inhabitants, including poor, innocent Lota.

Based on H.G. Wells’ 1896 novel THE ISLAND OF DR. MOREAU, ISLAND OF LOST SOULS tarts up the book’s disturbing anti-vivisection material considerably, most notably with the invention of the human/animal-chick crossbreeding experiment, and the movie only benefits from the addition of prurient elements. I mean, what’s not to like about a hot half-big-cat chick (other than the bestiality element, that is)? I think it’s rather telling that some variation on the Lota template has been found in each version of the story released since the 1932 landmark original, including boner-igniting Barbara Carrera in 1977, 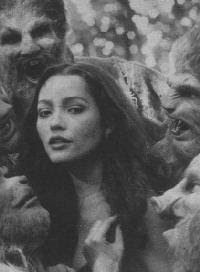 Fairuza Baulk in 1996 (since she possesses the most distinctive eyes this side of Meg Foster, did they even need to provide her with contacts?),

and even Marge Simpson in 2002’s “The Island of Dr. Hibbert” segment from the annual “Treehouse of Horror” special on THE SIMPSONS. 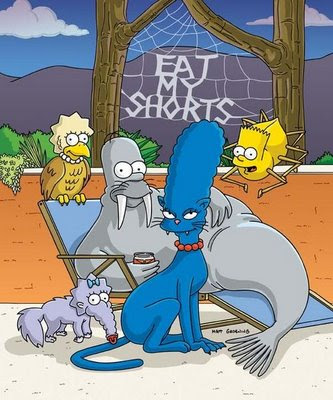 Guess you just can’t keep a good chimera down. 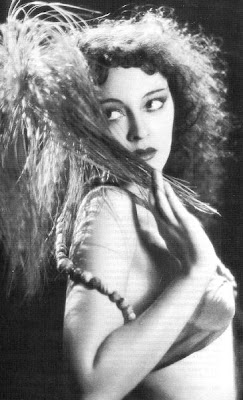 And, just for the fuck of it, one more of the awesome Fairuza Baulk.
Posted by Bunche (pop culture ronin) at Thursday, October 30, 2008