THOR: THE TRUTH OF HISTORY (ONE-SHOT) 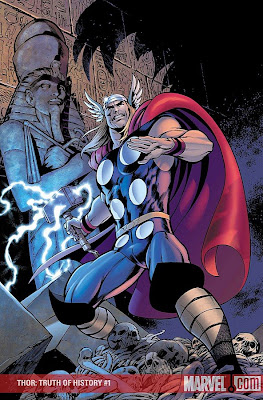 While the overblown and turgid THOR relaunch lurches along, writer-penciler Alan Davis shows up to remind us what the adventures of the God of Thunder are all about, namely cool mythological stuff, ass-whuppin' against monsters and other assorted miscreants, fun characterization and a truly epic scope. I don't know about you, but I'd rather see Thor and his Asgardian cohorts running around and mixing it up all over the many mythic realms rather than hanging out in fucking Oklahoma like they're currently doing (yes, I'm serious), and with this one-shot Davis — aided by his most perfectly-suited inker since Paul Neary, Mark Farmer — gave me exactly what I wanted to read in a Thor yarn. Davis, a product of having devoured the same classic period of Marvel lore that many of us did, clearly gets what makes a Thor adventure fun, and he skimps on none of the requisite elements.

THOR: THE TRUTH OF HISTORY opens with two renowned arcaeologists bickering over the truth behind the visage of the Sphinx at Giza, and the story proper skips back in time by nearly four thousand years to provide the answer to that ages-old mystery, a tale in which the Mighty Thor and his pals the Warriors Three (Fandral the Dashing, Hogun the Grim and Volstagg the Voluminous) unwittingly figure. Upon putting much foot to the collective ass of a bunch of out-of-line Jotuns (monstrous stock villains in Norse mythology and the progenitors of Thor's adopted brother and arch-nemesis, Loki), the heroes discover that Nedda, the queen of Jotunheim, has opened a portal to ancient Egypt and her warriors have been busy there looting and violating the law of non-interference with the earth, but they must travel there themselves to rescue Volstagg after he falls ass-first through the rift. From there it's just plain fun that I'm not going to spoil, so if you dig Thor and the gang, especially from the Lee-Kirby period, you should check this mamma-jamma out. It's only four bucks, the Davis-Farmer artwork is both epic and stunning and it contains more genuine entertainment than six months-worth of the regular monthly book, so what's not to like?
Posted by Bunche (pop culture ronin) at Monday, October 27, 2008

alan davis is SUCH an awesome artist.

dude can draw ANYONE.

but his thor KILLS it.