THE HOT BABES OF HORROR: "THE BRIDE" 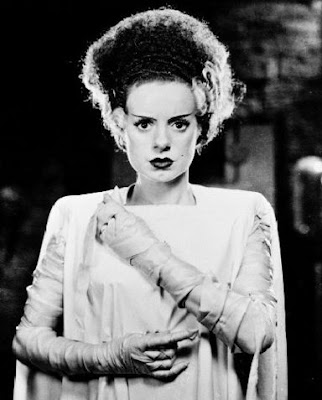 When beauty and horror collide: Elsa Lanchester as the Bride.
With all the mishegoss that's been swirling about me for the past few weeks I'd almost forgotten that it's the month of my favorite day of the year, Halloween, and as of now Yer Bunche is gonna rectify that inexcusable oversight. This year, rather than focus on simply the gory, more often than not testosterone-driven fury of assorted monsters, mad slashers, space aliens and zombies that so deliciously spice up this season, I'm gonna do my best to present a gallery paying well-deserved tribute to representatives of horror's fairer (though not necessarily more gentle) sex, and where better to start than with the creation most synonymous with the creepy aspect of that which is female, namely the iconic Bride of Frankenstein from the 1935 classic of the same name?

I'm a single, sometimes lonely guy, so I could totally relate when the Monster (Boris Karloff), at the urging of the balls-out insane Dr. Pretorius (Ernest Thesiger), demanded that his creator, Dr. Frankenstein (Colin Clive, Mister "It's alive!!!" himself), construct him a mate from the sundry bits of female corpses. It's a proposition somehow even more shocking than Frankenstein's act of re-animating a composite superhuman dead dude because now said dead dude could possibly reproduce with the participation of his distaff counterpart, and that's just plain howlingly wrong on many levels, both scientific and theological. (Think about it: live birth from what's essentially a corpse? Yeeesh!) But, luckily for the Monster and horror movie history, Frankenstein is a bit of an artist (especially when considering the science available during his day), and, assisted by Pretorius, who had grown impressive homunculi in jars, he crafts a miraculous woman from cadaverous leftovers.

It should come as no shock that so twistedly lovely a vision of femininity and the utterly morbid would emerge from an archaic film so subtly yet simultaneously in-your-face fuh-lamingly gay, thanks to the world’s awesome queer contingent working nigh-magical makeup and wardrobe alchemy in the most dire of circumstances since day one. That the Bride would result from the efforts of characters portrayed by two raging queens like Clive and Thesiger — whose separate characterizations not only nearly burned down movie theaters worldwide, but also laid down templates that would later be fused and perfected by Jonathan Harris as Dr. Zachary Smith — is simply appropriate for the film’s aesthetic (to say nothing of her incredible look being conceived and executed for the film by makeup artistry pioneer Jack Pierce). The intentionally campy, over-the-top tone and expressionistic design sense is frequently muted by moments of great emotion and sensitivity (if you don’t cry during the sequence where the Monster is befriended by a blind hermit, you simply have no soul), and the Bride’s arrival at the end, though brief, is no gimmicky afterthought. 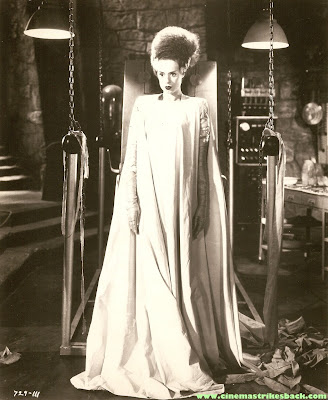 Here comes the Bride...for all of maybe three minutes.
When the nameless Bride is finally unveiled after the usual spectacular Kenneth Strickfaden pyrotechnics, we almost expect to behold another unrefined and terrifying patchwork revenant along the lines of the Karloff Monster — an incredibly masculine bogeyman if ever there was one — but our expectations are immediately turned upside down. Instead of a moldering, disfigured nightmare Eve, we discover a clumsily twitchy, stiff-limbed ingenue sporting a white-streaked proto-new wave Nefertiti-esque ‘do presumably blasted skyward by the untold number of volts used to ignite the spark of life within her, draped in an inpatient’s post-surgery gown. This is an undead thing, yet so beautiful and delicate in her own way, her raiment an eerie parody of nuptial lace, that we forget she’s a walking jigsaw puzzle of a corpse, and, scars clearly pointing out where her head attaches to her neck be damned, we share in the Monster’s undisguised elation at finally having someone like himself that he can have as a companion and a mate. 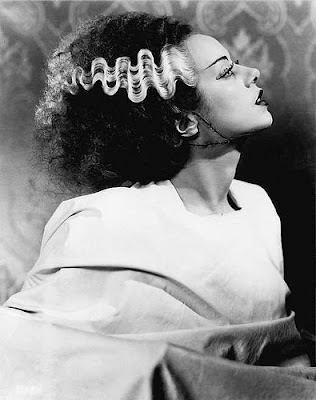 As the hopeful Monster awkwardly moves to greet his mate, pitifully gesturing with welcoming hands while hopefully asking “Friend? Friend?,” the Bride lets out a strangled yelp of repulsion upon seeing his considerably-less-than-Denzel-like looks and instinctually gravitates to the slick Dr. Frankenstien for succor. Still hopeful, the Monster once more earnestly tries to appeal to his manufactured mate, but she just ain’t havin’ it and unequivocally hisses her final rejection of him, prompting the Monster to let Dr. Frankenstein haul ass out of there with his own bride before throwing a lever that blows the tower lab and the batshit-loony Pretorius to kingdom come.

Again, I can relate.

I’m glad that the Bride served her purpose and was wisely not dredged up again for umpteen sequels, allowing her to retain her iconic specialness, but one can’t help but wonder what would have become of her if she’d either accepted the Monster or gone down her own path? Would she too have been a physical powerhouse? Would the memories and personality of the woman whose brain she was supplied with have come to fore and allowed her to be articulate and charming in ways that her male counterpart could never have hoped for thanks to his dropped and glass shard-penetrated criminal gray matter? We’ll never know. Yet another thing to add to the ages-long list of female mysteries, I guess…
Posted by Bunche (pop culture ronin) at Thursday, October 16, 2008

I've read many explanations over the years explaining the Bride's wacky 'fro.... Yours is as good as any.

Glad I'm not the only one who always thought she was cute as a button!

"Was this the face that launched a thousand Goths...?"

I'd say the face that launched a thousand Goths would be either Vampira or Morticia Addams.

It's a credit to Elsa Lanchester that she manages to be every bit as creepy and weirdly sexy in her role as Mary Shelly in the prologue. I love that weird little tilt of her head when she delivers the line, "it will be published... I think."

Have you seen Metallica's Kirk Hammet lately? He grew his hair back out, and he now has white streaks just like the Bride. Then again, he always used to play the Munsters theme song as his guitar solo, so it kind of fits.

>I'd say the face that launched a thousand Goths would be either Vampira or Morticia Addams.

The Bride predates thm both by a few decades. I think she even predates Charles Addams' "family" cartoons by several years.

Even so, Lon Chaney's assistant in London After Midnight predates those Goth-girl progenitors.

And Theda Bara trumps them all.

PS: Thanks for the Bride post! It inspired me to re-watch Gods and Monsters again last night. :)

I know the Bride predates Wednesday and that she's eerie and all, but when I think "Goth" a figure clad in white doesn't enter my head. All of the Goths I've ever personally encountered went with black, and on some occasions a red or deep maroon. White kind of takes away from the aesthetic IMHO.

But she is eerie as hell and a seminal creation, so upon careful reconsideration I'd say you're right, although now you've inspired me to dig deep into the silents...