INSPIRED OR IDIOTIC? YOU DECIDE!

All of my large tribe of friends whom I consider more like family are creative individuals, sometimes to a fault, so it should come as no shock that some of them are masters of completely ludicrous last-minute Halloween costume concoction. Case in point, this horrific tableux from 1995: 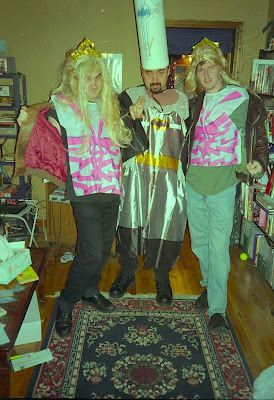 This ungodly shibboleth features, from left to right, Little Eddie, Greaseball Johnny and Hughes as the Olsen Twins and the incredibly genius "Bat-Pope." Each outfit was cannibalized from a cheap-assed Ben Cooper kid's costume and must have amounted to a cumulative cast of perhaps thirty bucks, the wigs being the high-cost element. And, as if the Bat-Pope wasn't bad enough already, mere moments before arriving at that evening's party, John upped the ante by taping a hastily-fashioned box to his chest to act as a convenient holster for his cigarettes.

However this triumph would eclipsed the following year by Ed's conceptually insane "retarded pirate" getup. 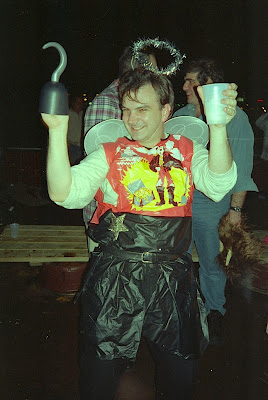 (Photo courtesy of Jared Osborn)
Once more pissing on the legacy of the Ben Cooper company, Ed took a chintzy child-size pirate costume and augmented it with a halo and fairy wings for no adequately explained reason. Truly appalling, yet oh so wonderful.
Posted by Bunche (pop culture ronin) at Wednesday, October 29, 2008

Lest we forget, the Olsen Twins were still little girls at the time, and Murr and Hughes arrived with a song and dance routine prepared.

Yes. In fact, the song in question was the deathless "Brother For Sale," which prompted me to bellow in my favorite "scary black man" voice, "WHAT'S THIS SHIT ABOUT A BRUTHA FOR SALE?!!?"

My favorite cheapo "costume" consisted of wearing normal everyday clothes and taping a sign to my chest that read "Invisible Man...you can't see me"