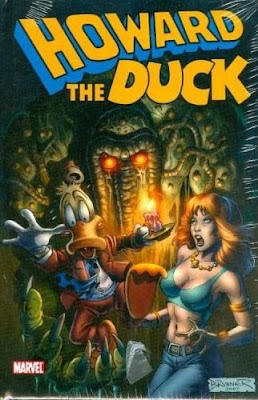 The 1970's were an odd period for Marvel Comics, a time when the creative void left by the departure of Jack Kirby — indisputably the real muscle of the "Stan & Jack" duo — exposed just how much the company needed his singular genius. Damned near all of what were once among the shining lights of the American comics biz for the previous decade were pretty much treading water on a month-to-month basis, now just cranking out lackluster issues featuring the familiar heroes just going through the motions and facing such useless foes as Mahkizmo (a macho prick from an alternate future who was a ham handed Women's Lib-era commentary on, well, his name says it all), Big Ben (a huge Barry White lookalike with lethal platform shoes) and Gaard (an outer space hockey goalie, I shit you not), and while there were occasional works worth reading, like the Kree-Skrull War arc in THE AVENGERS, the headliner books were pretty much all stuck in a boring rut. Considering what a snoozefest the Marvel Universe become, I guess the powers that be at the House of (mostly Kirby's) Ideas figured they had nothing to lose by opening things up a bit and taking chances on a new wave of artists and writers, most of whom were still in their twenties and fairly new to the game as opposed to the majority of those who came before them, to say nothing of being of an age that experienced being youths in the turbulent and psychedelic late-1960's and absorbing the influences of the time. These new creators included Barry Smith (before that pretentious "Windsor" bullshit), Paul Gulacy, Jim Starlin, P. Craig Russell, George Perez, John Byrne and others who would deservedly become legends, but the one member of that fraternity whom I feel never really got his just due was scripter Steve Gerber (1947-2008). Known for his quirky work on series like MAN-THING, OMEGA THE UNKNOWN and THE DEFENDERS among others, Gerber will always be remembered by fans of a certain bent (like Yer Bunche) for being the creator and writer of what's a strong contender for the title of Marvel's number one cult book of its era: HOWARD THE DUCK. 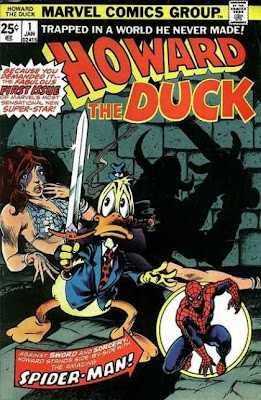 Emerging from immeasurably humble beginnings as a supporting character in ADVENTURE INTO FEAR #19, Howard the Duck was an irascible, cynical cigar-chomping anthropomorphic duck from another dimension who got sucked into our world, ending up spending much of his time in the squalid confines of 1970's Cleveland. In short order Howard encountered "exotic dancer" and redheaded bombshell Beverly Switzler and the two hit it off to such a degree that they were soon inseparable, sharing many an insane adventure and becoming the most bizarre couple in comics history (well, at least until Abby took a bite from Swamp Thing's tuber; believe me, that's nowhere near as dirty as it sounds). Howard's low-rent picaresque exploits took place within the Marvel Universe and occasionally brought him into contact with the likes of Spider-Man and the Defenders, but his was most emphatically not a superhero book, but instead a broad and extremely intelligent satire of post-Watergate America that read like the promise of underground comics' social commentary coming true in the relative mainstream, only minus the graphic sex, violence, drugs and cussing, and illustrated by such talented pros as Val Mayerick, Frank Brunner, John Buscema, Carmine Infantino and the definitive Howard the Duck artist, Gene Colan. 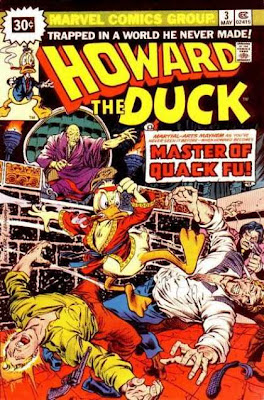 HOWARD THE DUCK #3: the first issue I read, after which I was totally hooked. (Cover art by Rich Buckler and Steve Leialoha)

HOWARD THE DUCK’s original run lasted for a total of thirty-one regular issues, one annual and an oversized treasury edition (as well as his first appearance and two backup features in the unintentionally hilariously-named GIANT-SIZE MAN-THING) before later reboots of varying worth, and the fact that it lasted as long as it did as the literal "odd duck" amidst a seas of muscles, big tits and spandex says a lot for its quality and the unique flavor it dished out. Absurd as hell, genuinely funny and very touching in places (particularly in the handling of Howard's relationship with Bev), it's absolutely worth reading if you've never come across it before and are only aware of the unspeakable abortion that was its 1986 movie adaptation, and it's all available in one huge omnibus volume. Among many fun story arcs, there are a few major standouts that should not be missed, such as the trenchant comment on ultra-violent martial arts movies “Four Feathers of Death” (stunningly realized by John Buscema and Steve Leialoha), “Open Season” (in which Howard runs for president during the 1976 election), a four-issue yarn that sees Howard suffer a nervous breakdown, get thrown into a mental institution where he meets soon-to-be-supporting character Winda Wester and is possessed by a demon, the hilarious Arabian Nights spoof “Thief of Bagmom,” the sheer genius landmark text issue featuring “Zen and the Art of Comic Book Writing” (an ingenious installment that was Gerber’s deft way of facing the dreaded “Deadline Doom”) and an utterly insane and tripped-out STAR WARS parody featuring my all-time favorite absurd Marvel villain, “Bzzk’ Joh” (pronounced “Berserk Joe”). Seriously, I cannot recommend this stuff more highly. However, I would advise putting the book down after issue #23 (the second half of the STAR WARS lampoon) and before getting to #27, which was Gerber's last full issue before he was removed from the book over issues of creative control; the stories following #23 are not terrible, but after that high point the series just kind of ran out of gas, so it's best to skip its mediocre slide into the abyss of cancellation.

HOWARD THE DUCK is a balls-out classic and it deserves the omnibus treatment. TRUST YER BUNCHE and add it to your collection immediately if possible. I think it may have gone in and out of print in a nano-second, but it's available through sellers on Amazon (I ordered mine back in early August and it took until last week to come back into stock).
Posted by Bunche (pop culture ronin) at Tuesday, October 21, 2008

When I think of 1970s Marvel, Gerber is one of the first names that come to mind. Others include Gene Colon, Marv Wolfman, Mike Ploog, Alfredo Alcala, John Buscema, Tom Sutton, and - late in the decade - those heralds of the revolution Chris Clarmont, John Byrne and Frank Miller. Without the void, there's no room for possibilities!

H the D was an interesting abberation in Marvel history. And Lucas' waterloo.

But more to the point, you brought up the horrid doldrums of the 1970s. There I have a comment to offer. This was the start-up of Roy Thomas' run, which briefly turned into Archie's then uh, John Warner (for a long weekend, I think) and then-- ahhh-- Shooter's tenure.

I think the turmoil indicated was started by Roy The Boy's all-Fan-Boy network coming into play. Archie may have tried to reign them in, but Shooter came along with his "stand-alone" concept. The only writer able to deal with Shooter's awful theory was Jerry Conway. His stuff was so bad, he was what made me stop reading Spider-Man, the only I'd read continuously from the beginning.

Shooter's grim drumbeat of "a kid in East Butt Fuck, Iowa must be able to pick up one comic, read it, understand the back-story and characters, have a complete story, then put it down never to read another again" -- he actually said that. It explains the self-conscious top-tier introduction of every book in the early 80s-- above the splash page.

So I think there's a good explanation of why comics were so odd back then. Also, Shoots restructured the editorial concept. The organizational pyramid was broad and flat-- After Shooter it was taller, prouder with him elevated higher. Him as ed in chief and then editors plus assistants. With those people in charge of art teams. Prior, the Editor was not in charge of art teams, but Danny Crespi and a fellow by the name of Lenny Grow were.

There was a lot of fan-hitting-shit around the time when Shoots kicked out the "Creator-Editors" like Marv Wolfman and Len Wein. All of the above took place around 1974-76. I think.