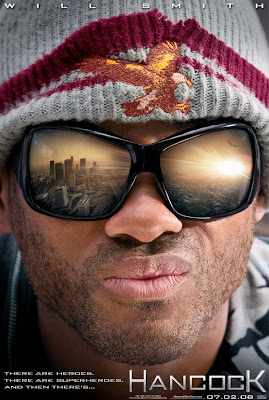 When it came out during the annual summer blockbuster season, I gave HANCOCK a miss after several people whose opinions on things superhero and movie-related jibe with my own stated in unequivocal terms that it was an across the board mess, an opinion shared by the majority of the nation's film critics. But what really cemented my not seeing it was the gushing review it received from a co-worker who I not only consider a total asshole but is also a staunch advocate of soulless Hollywood "product" movies," so that was enough to kill whatever interest the trailer had sparked.

Cut a few months forward to the present and me with nothing better to do at 2AM last Saturday night. I put HANCOCK into the DVD player, watched it, and I have to say that it is indeed bad, but bad in an especially frustrating way. Within this film that displays all the earmarks of a movie heavily tampered with in order to ensure the all-important PG-13 rating when released, there lurks the foundation of what could have been a terrific character study about a deeply flawed super-being, but the finished product will leave you scratching your head.

HANCOCK tells the story of the eponymous superman (played way against type by Will Smith) who possesses the standard repertoire of superpowers — flight, super-speed, immeasurable strength, invulnerability — and fights the good fight against assorted bank robbers, terrorists and other assorted miscreants. That is, when he's not passed out drunk on a public bench somewhere in L.A. You see, Hancock awoke with amnesia in a hospital nearly eighty years ago and nothing in his pockets save for random pocket junk including tickets to see the then-new FRANKENSTEIN with Boris Karloff, and ever since then he's been the world's sole superhero, a miserable, lonely hardcore alcoholic whose booze-impaired acts of heroism invariably cause millions of dollars worth of collateral damage to buildings, wildlife and, presumably, people. When one of his rescues saves the life of PR whiz Ray Embrey (Jason Bateman) while simultaneously totaling a freight train, Ray hits upon the brilliant idea of fixing Hancock's image by having him voluntarily turn himself in for a prison term that would symbolically work toward him repaying society for all the damage he's caused. Hancock agrees to discuss the plan with Ray at his home and meets Ray's hero-worshiping son (whose biological mother died giving birth to him) and his hot wife, Mary (Charlise Theron), who is quite visibly shaken by the wasted superhero and makes it clear that she doesn't want him around. But during their time together, a strange sense of recognition passes between Hancock and Mary...

Hancock voluntary goes to jail and is entered into the general population, an act of serious goodwill on his part because he could walk through the walls like they never existed any time he felt like it. Think of Superman doing doing exactly the same thing and you'll get the idea. He's immediately targeted by the legion of criminals he personally put away over the years and they attempt to intimidate him, but how fucking stupid is that? They know exactly who and what Hancock is, so a normal human, even a gang of normal humans, threatening him would be about as suicidal and futile as trying to skin a live Great White shark with your flaccid penis. In the film's most amusing scene, a fresh-to-the-slams Hancock tries to be polite and just go to his cell, addressing his fellow inmates with a "don't start none, won't be none" speech, but when that doesn't work he points at the nearest huge inmate and tells him that if he doesn't chill out he will stuff another prisoner's head up the big convict's ass. When the dumbass con doesn't take the warning, Hancock makes good on his threat and the director wisely — and much more hilariously if you ask me — opts not to show us the cranial suppository being administered and instead shows us the violently repulsed reaction of the dozens of inmates who do see it, although we do get to see the aftermath as Hancock struts to his cell to the incongruous accompaniment of the SANFORD AND SON theme on the soundtrack. (Seriously, what the fuck was that about?)

After that it's a chronicle of Hancock detoxing in prison and going through anger management counseling before getting let out to handle a hostage situation during a bank robbery where the head bad guy has wired the hostages to explode if his thumb comes off of the detonator switch. Once that situation is handled the cleaned-up Hancock becomes the toast of the town and ends up back at the home of Ray and his wife after a party, eventually helping the plastered Ray into bed. Alone with Mary, the heat between she and Hancock awakens and as Hancock kisses her she moves at a speed that surpasses his own and throws him bodily through a wall and out into the street, followed by the enormous refrigerator. Obviously Hancock is not as alone as he had assumed.

I'll spare you the totally pointless stuff involving the now one-handed bank robber and cut straight to what the audience and Hancock wanted to find out: when Hancock confronts Mary about who and what she is, we learn that the two of them are the last of what many cultures once termed gods, put here to protect the Earth. Mary states that these beings were created as pairs and that the rest of them died out (no explanation as to how or why is given) long ago. She also reveals that she and Hancock are actually married and had been together for three-thousand years, but that during their last go-round they were assaulted by rednecks in Florida who were offended by the sight of a checkerboard couple, the attack leaving Hancock with his skull half caved in and causing his amnesia.

"But wait a minute," I hear you say. "If Hancock and these super-folk are all invulnerable and shit, how can he be physically hurt at all, to say nothing of suffering a memory-erasing head injury?" Well, according to Mary all of the immortal heroes eventually begin to lose their powers and become mortal if they spend too much time in close proximity to one another, thereby allowing them to have children, grow old and die. Now I don't know what you think, but that makes no fucking sense at all to me. If the purpose of the gods or heroes or whatever the fuck they are is to protect the world and do so in pairs, why would whatever phenomenon that created them give them a flaw that cancels them out if they stay paired up? And if that's the case, how could Hancock and Mary have been a couple for three-thousand years, doing heroic deeds and whatnot, without completely losing their powers a hell of a long time ago? During the brief time they spent in each other's proximity in the present they both begin to lose their powers and must separate in order to remain fully-functional super-beings, so I really need an answer to that question.

And while all of that is irritating enough, what rankles me most is that after we find out that Hancock chose his name when the nurse who released him asked him to sign his "John Hancock" on the release forms (when Mary was far enough away from him to allow his woulda-been-fatal head wound to heal), Mary could have filled in all of the missing gaps in his life but doesn't, and that includes letting the poor guy in on exactly what his own real name is. Seriously. The film ends with Hancock moving to New York City while Mary continues her life with Ray and his son, only no longer having to hide her secret from her family, and that's that.

If they'd dumped the unnecessary bullshit with the bank robber seeking revenge and had instead focused on the unraveling of Hancock's missing history they could have had an amazing and affecting character study of a very flawed superhero and him having his history filled in, not only by his beautiful, more powerful wife, but also with flashbacks to the various historical periods where the two of them and perhaps others of their kind had all kinds of awesome adventures. But nooooooooooooooooo, that would have taken some effort and regard for the audience, and the poor saps will shell out their cash for anything with Will Smith in it — THE LEGEND OF BAGGER VANCE, anyone? — so who really cares? I fucking care, and when I think of what this could have been I just get mad. Can you imagine how cool it would have been to see the adventures of Hancock (or whatever the fuck his name actually is) and Mary throughout the ages? Well I can, so hopefully that's what they'll focus on should there ever be a HANCOCK II.

As it stands, HANCOCK is certainly worth a look, but be prepared for the royal screw-job perpetrated by the film's final third if you decide to check it out.
Posted by Bunche (pop culture ronin) at Saturday, October 11, 2008

You disappointment with this movie is your own fault for paying attention. I watched it with one eye as I was working and ignored the dumbest parts. It was much better that way.
And need I point out that you just asked for more time to be spent on the "mystery" of Hancock's past which you hated the answer to.

I hated the answer because what few details there were made no sense. If they do a sequel they could retcon all that bullshit about close-proximity power leeching and get on to showing us heroic adventures throughout history. And giving the guy a name, for fuck's sake!