I just received this bit of political fun from the lovely Sukihoshi. (Double-click on it to see it larger) 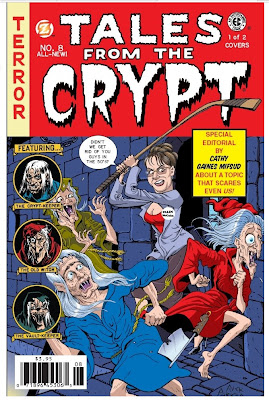 It's the cover from an upcoming issue — to be released on 10/22 — of the re-animated TALES FROM THE CRYPT (published by Papercutz) and based an idea by former Marvel Comics mainstay Jim Salicrup, but drawn by the mighty Rick Parker — aka "Ricko the Sicko" — a crazed Southerner who's one of my favorite humor illustrators and a generally excellent human being with whom I share a similar outlook on life. I love the guy's work, and any amount of laughter that I can get in these dark times is greatly appreciated.

For those not exactly up on the history of American comic books, the cover refers to the 1954 United States Senate Subcommittee on Juvenile Delinquency, the hearings that effectively cuts the balls off of the comics industry and lead to the creation of the self-regulatory Comics Code Authority, a group that made sure there was nothing within the pages of a Code-approved comic that might harm the delicate minds of the nation's kiddies. This climate of censorship admittedly cleaned house on cranked-out "crime" comics and the like that were designed to appeal to the lowest common denominator with violent and prurient content and seen to influence and cause juvenile delinquency, but in the process the majority of the E.C. Comics line were shut down, leaving the nascent MAD MAGAZINE — then just a humble comic book — the sole survivor of the purge. Unceremoniously killed were the legendary and groundbreaking TALES FROM THE CRYPT, THE HAUNT OF FEAR, THE VAULT OF HORROR — whose name inspired this very blog's title — SHOCK SUSPENSTORIES, WEIRD SCIENCE and several others.

That was a tragic turn of events because those series featured what may arguably be the best-written and most superbly-illustrated work ever to appear in American comic books (by American artists, anyway) and tackled issues of social import such as racism and the madness of warfare, but what lingers most in the memory of E.C. fans is most likely the gleeful gruesomeness of the line's horror and crime output, most of which featured as much over-the-top gore and violence as the creators could get away with at the time. The examples of E.C.'s slaughterhouse sensibility are legion, but the two that immediately leap to mind for me are this cover, a work made that much more effective thanks to seeing neither of what would be a savage neck wound or a pool of blood from what would have no doubt been considerable arterial spewage,

and from THE HAUNT OF FEAR # 19 (1953), the infamous closing panels of the Jack Davis-illustrated "Foul Play": 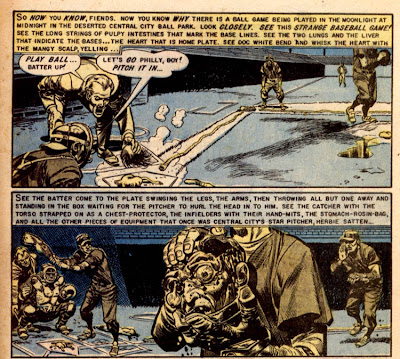 A scene of such wanton (though well-deserved) dismemberment would cause outrage even now, so imagine the stir this must have caused fifty-five years ago!

Oh, and how about this incredible Wally Wood cover from 1952? 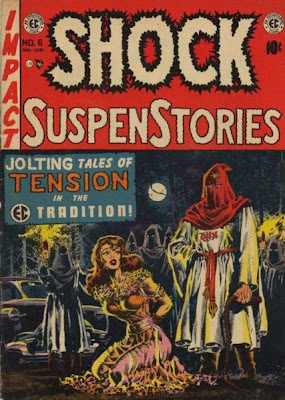 Just one glimpse at that illustration and the mind fills with several ways in which the depicted scenario could go very, very badly for the lingerie-clad heroine, and believe you me, if I had been an impressionable youth back then I would have bought this sumbitch in a heartbeat!

So thank you, Rick Parker, for bringing those lurid favorites back to mind and fusing them with a very real and ominous horror.
Posted by Bunche (pop culture ronin) at Wednesday, October 08, 2008