A MUST-HAVE FOR ALL YOU MYTHOLOGY FREAKS: YOKAI ATTACK! THE JAPANESE MONSTER SURVIVAL GUIDE (2008) 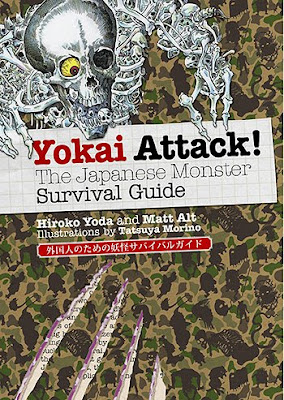 It's not easy being into world mythology and legends when there are very few books on whichever stories and characters you want to learn about written in the language that you comprehend. For me this has proven especially true when it comes to researching the lore of the creatures indigenous to the Japanese myth base, a group collectively known as Yokai, a name derived from the written form of the words "otherworldly" and "weird." I've was made aware of these spooks and monsters through years of absorbing Japanese movies, comics and TV, and the Yokai are quite prevalent in all of those media and beyond, which comes as no surprise since they've been around for centuries and have become permanently ingrained into the culture. Best known in the States through what little has been made available in translated/subtitled form of Shigeru Mizuki's landmark manga series GE GE GE NO KITARO and its televison and movie incarnations, as well as movies like KAIDAN (1965), SPOOK WARFARE (1968), ONE HUNDRED MONSTERS (1968), ALONG WITH GHOSTS (1969) and THE GREAT YOKAI WAR (2005), the Yokai are an incredibly varied bestiary that includes some of the most bizarre horrors every seen anywhere, with their appearance and functions being especially perplexing to the uninitiated Westerner.

Well, be perplexed no more! From writers Hiroko Yoda (no relation) and Matt Alt comes YOKAI ATTACK! THE JAPANESE MONSTER SURVIVAL GUIDE (Kodansha International, 2008), a delightful and thoroughly-researched answer to the prayers of the Western Yokai-curious. Packed to the ghastly gills with Tengu — both Karasu and Hanadaka varieties — , Neko-mata ("the Forked Cat"), the Wanyudo ("the Firewheel"), the Onibaba, Rokuro Kubi ("the Long-Necked Woman") and many, many more, each as facinating as much of what we know from European-based legend, if not moreso by virtue of the Yokai's relative unfamiliarity. Some of the Yokai are even hardcore martial artists who enjoy kicking ass, as well as teaching combat skills to humans who later go on to military fame as warriors of incredible prowess, but my favorite of the ass-whuppin' monsters is the Kappa ("river-child"), a water creature with a number of interesting quirks that has turtle-like attributes, a Moe Howard hairdo and loves to challenge passersby to impromptu wrestling contests. 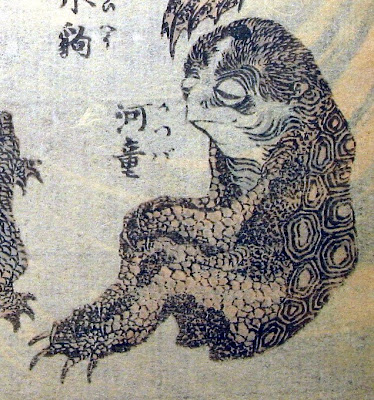 A Kappa, as interpreted by the legendary Hokusai (the dude who did that famous wave print).

The Kappa are kind of like a less-endangered version of the Creature from the Black Lagoon, only sentient and really, really nasty when they want to be. I mean, how else would you describe a monster that stuffs its scaly mitt straight up your asshole to forage for your shirikodoma, "a mysterious organ said to be located in the colon?" Now that's something I would love to see depicted in a movie! In fact, I can just picture it:

(Scene: two samurai youths, Shigeru and Shinichi, dive into a river to cool off on a hot summer day, unaware that they're being watched from below the surface by a hungry Kappa.)

SHIGERU: Gosh, Shinichi! It sure feels good to cool off!

SHINICHI: You said it! (PAUSE) Hey! Something just stroked inside my thigh!

SHIGERU: Ha! You wish! There's nobody here but us. What the fuck are you talking about?

(Shinichi is then thrust from the water by a guffawing Kappa, it's forearm lodged up the young man's ass, blood, entrails and excrement showering in all directions and splattering Shigeru, giving the scene the aspect of a seriously twisted bit of hand puppet theater. Dr. Know's "Fist Fuck" is heard on the soundtrack.)

Hey, I've seen a lot of weird shit in Japanese horror movies, so this scenario isn't even a stretch.

Anyway, I can't recommend this book enough, both to those in the know and to those who may be casually intrigued. Far from what could have been a stodgy "scholarly" tome, the author's made sure that the text is engaging and loads of fun for the teratism advocate, and it's a bargain at $14.95)
Posted by Bunche (pop culture ronin) at Friday, October 10, 2008