Wouldn't you know it? Just as I'm reeling from the annual wallet gang-rape that it Christmas gift shopping I discover that Go Hero has issued an incredible and accurate collectible figure depicting the comic strip version of good old Buck Rogers, seen as he looked in the early years (although if I can make a minor quibble, I wish they'd given him the inverse-gravity Jumping Belt rather than the later but more famous rocket pack). I mean, just look as this: 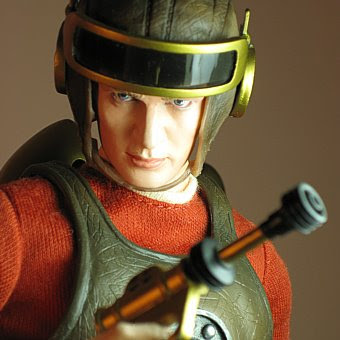 Now that's freakin' Buck Rogers! The 1:6 scale figure stands about a foot tall and is a triumph of sculpture and costume fabrication, accurate down to the socks (yes, it even has socks!). 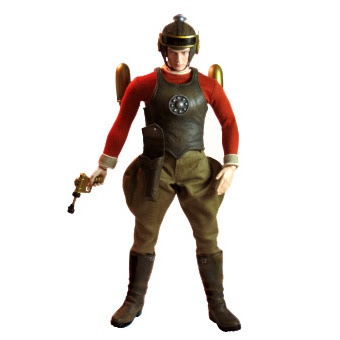 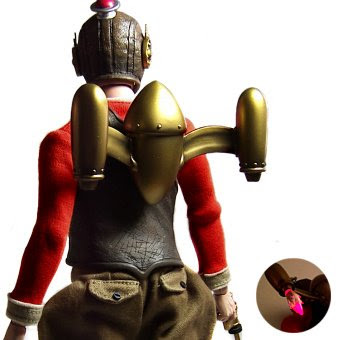 And he comes equipped with a space helmet for a little E.V.A. as needed. 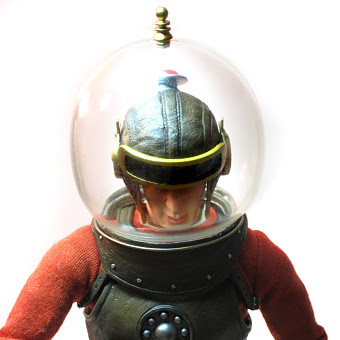 Also included are a standard-issue atomic pistol and a removable leather-like helmet with lowerable visor, as well as gloves to complement the outer space gear. 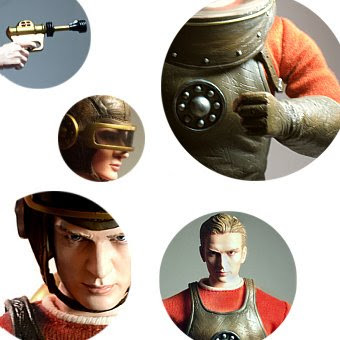 And as if all that weren't cool enough, the figure also includes an internal audio device with remote control that allows the user to plug it into a USB port and download and listen to episodes of the 1930's Buck Rogers radio show. So if you ask me, it looks like Barbie's found a new boyfriend (although Buck's longtime partner and squeeze, Wilma Deering, may have something to say about that and blast that scrawny bitch to cinders with her atomic pistol).

As a huge freak for the old school Buck I could not help but go into a state of full-blown geekgasm when I saw this and I seriously pondered going into temporary pennilessness so I could snag one, but it's best that I wait and tally up my finances just after the new year. If I receive some of the annual holiday cash I usually get from relatives and make a trip down to Manhattan's Strand bookstore to do the trade-in dance with some of the mountain of books I have lying about, I can shell out the $175 asking price and not feel completely insane for having done so. It's limited to an edition of just 1000, so I hope they aren't sold out by the time I place my order. 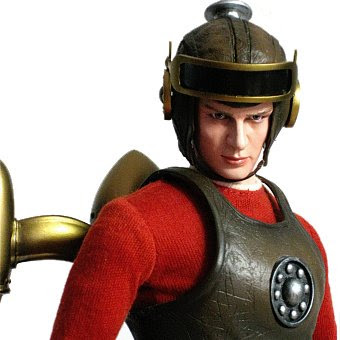 When I saw this figure I immediately contacted the manufacturer and complemented them on a job well done, also asking if they'd be issuing a Wilma Deering that was just as good ('cause you just can't have Buck without Wilma) and I was pleased to hear that Wilma's just one of the Buck Rogers cast slated for the collectible figure treatment. Buck will look awesome hanging out on the shelf next to my foot-tall FIST OF THE NORTH STAR Kenshiro, so I'll just have to be patient and set aside the shekels. So if you, like Yer Bunche, are drooling to own one of these magnificent "dollies" (as my buddy John's wife, Sue, would mockingly put it) head to the Go Hero site immediately and gaze upon the sheer 25th Century awesomeness. And for those of you who think Buck Rogers is a jazz-age pansy in jodphurs (and shame on you if you do!), the company makes an equally terrific Buster Crabbe Flash Gordon — priced at $145.00 — that looks like it walked right out of the screen from one of the classic matinee serials of the 1930's. 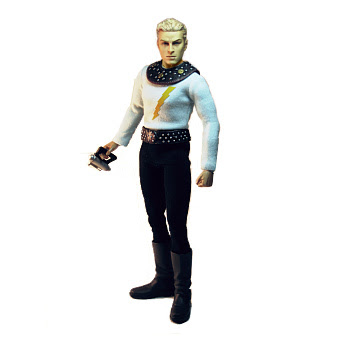 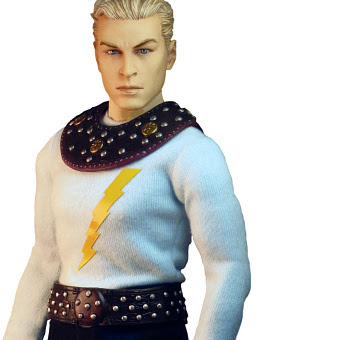 It's appropriately romantic/fey-looking, so much so that if you did a little do-it-yourself modification it wouldn't take much to turn Flash Gordon into the late and loony performance artist John Sex, he of "Hustle With My Muscle" fame! 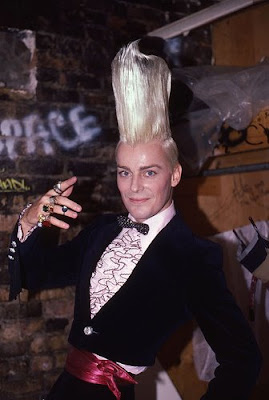 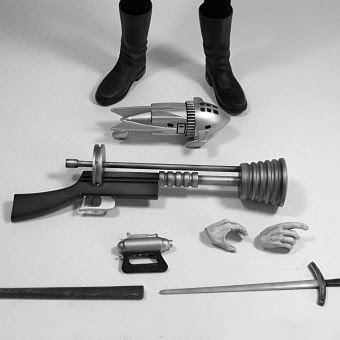 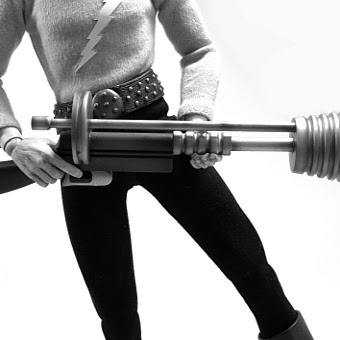 These may not be cheap, but at least they aren't nearly twice the price like some Asian-manufactured toys I can name.
Posted by Bunche (pop culture ronin) at Sunday, December 21, 2008

Yeah, that pretty much blows away Flash-as-Jets-quarterback . . . although I will always honor that movie for being brilliantly bad.

So where's Gil Gerard and that retarded little robot? You know, the REAL Buck Rogers!