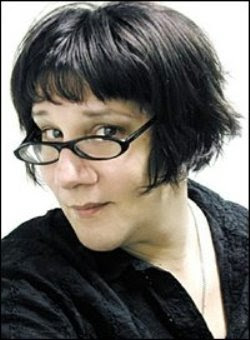 This one's weird for me to write because it's the first pop culture death notice/tribute I've written about a person who was a friend of mine. I just found out that Maddie Blaustein died ten days ago and that news shocked the living shit out of me.

I first met Maddie about a hundred years ago during my early days at Marvel Comics, back when she was still Adam "Addie" Blaustein, but didn't really get to know her until I started working in the DC Comics production department. She was one of the first people at that company to welcome me with open arms and was a delightful counterpoint to the place's sometimes-corporate pretensions, being a warm-hearted and funny transgendered fellow-oddball who also worked as a voice actor for cartoons and video games, perhaps most notably serving as the second actor to serve as Meowth on POKEMON and the entire Tusket family on ULTIMATE MUSCLE: THE KINNIKUMAN LEGACY.

Maddie passed away in her sleep after what has been described online and from the people I asked who also knew her as a short illness, so I have no idea what the cause was. All I know is that she was funny, talented, sweet and very kind to me, so I wish her nothing but luck on the next go-round.

Heidi MacDonald has more on Maddie over at The Beat, including reminiscences left by friends and former colleagues.
Posted by Bunche (pop culture ronin) at Thursday, December 18, 2008

I am really upset to see that Maddie has passed. Too young. That is really tough. I knew him back when he was the most manly 'he' possible. There were no feminine qualities at all. I was encouraging when I ran into him in some sort of "interphase" thing at DC-- but it was far too brief and no way to really talk. And then time marched on.

When I knew him he Owsley's assistant. I admired his style, as I believe he, like myself, was a devoted spear carrier. Which I believe all assistant editors should be. Did you know that he pitched and wrote "Teenage Radioactive Mutant Hamsters?" I might even have gotten that correct. It was a gag issue that I think, Larry Hama put out.

Oh well, he/she was a good person. I hope she found some happiness as I understand there is often quite a bit of unhappiness involved in going through transgender stuff.