Bettie Page, a legendary pinup girl whose photographs in the nude, in bondage and in naughty-but-nice poses appeared in men’s magazines and private stashes across America in the 1950s and set the stage for the sexual revolution of the rebellious ’60s, died Thursday in Los Angeles. She was 85. 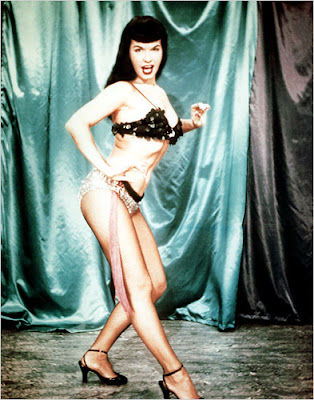 Bettie Page, with trademark heels and bangs, in the 1950s. More Photos »

Her death was reported by her agent, Mark Roesler, on Ms. Page’s Web site, bettiepage.com.

Ms. Page, whose popularity underwent a cult-like revival in the last 20 years, had been hospitalized for three weeks with pneumonia and was about to be released Dec. 2 when she suffered a heart attack, said Mr. Roesler, of CMG Worldwide. She was transferred in a coma to Kindred Hospital, where she died.

In her trademark raven bangs, spike heels and killer curves, Ms. Page was the most famous pinup girl of the post-World War II era, a centerfold on a million locker doors and garage walls. She was also a major influence in the fashion industry and a target of Senator Estes Kefauver’s anti-pornography investigators.

But in 1957, at the height of her fame, she disappeared, and for three decades her private life — two failed marriages, a fight against poverty and mental illness, resurrection as a born-again Christian, years of seclusion in Southern California — was a mystery to all but a few close friends.

Then in the late 1980s and early ’90s, she was rediscovered and a Bettie Page renaissance began. David Stevens, creator of the comic-book and later movie character the Rocketeer, immortalized her as the Rocketeer’s girlfriend. Fashion designers revived her look. Uma Thurman, in bangs, reincarnated Bettie in Quentin Tarantino’s “Pulp Fiction,” and Demi Moore, Madonna and others appeared in Page-like photos.

There were Bettie Page playing cards, lunch boxes, action figures, T-shirts and beach towels. Her saucy images went up in nightclubs. Bettie Page fan clubs sprang up. Look-alike contests, featuring leather-and-lace and kitten-with-a-whip Betties, were organized. Hundreds of Web sites appeared, including her own, which had 588 million hits in five years, CMG Worldwide said in 2006.

Biographies were published, including her authorized version, “Bettie Page: The Life of a Pin-Up Legend,” (General Publishing Group) which appeared in 1996. It was written by Karen Essex and James L. Swanson.

A movie, “The Notorious Bettie Page,” starring Gretchen Mol as Bettie and directed by Mary Harron for Picturehouse and HBO Films, was released in 2006, adapted from “The Real Bettie Page,” by Richard Foster. Bettie May Page was born in Jackson, Tenn., the eldest girl of Roy and Edna Page’s six children. The father, an auto mechanic, molested all three of his daughters, Ms. Page said years later, and was divorced by his wife when Bettie was 10. She and some of her siblings were placed for a time in an orphanage. She attended high school in Nashville, and was almost a straight-A student, graduating second in her class.

She graduated from Peabody College, a part of Vanderbilt University in Nashville, but a teaching career was brief. “I couldn’t control my students, especially the boys,” she said. She tried secretarial work, married Billy Neal in 1943 and moved to San Francisco, where she modeled fur coats for a few years. She divorced Mr. Neal in 1947, moved to New York and enrolled in acting classes.

She had a few stage and television appearances, but it was a chance meeting that changed her life. On the beach at Coney Island in 1950, she met Jerry Tibbs, a police officer and photographer, who assembled her first pinup portfolio. By 1951, the brother-sister photographers Irving and Paula Klaw, who ran a mail-order business in cheesecake, were promoting the Bettie Page image with spike heels and whips, while Bunny Yeager’s pictures featured her in jungle shots, with and without leopards skins.

Her pictures were ogled in Wink, Eyeful, Titter, Beauty Parade and other magazines, and in leather-fetish 8- and 16-millimeter films. Her first name was often misspelled. Her big break was the Playboy centerfold in January 1955, when she winked in a Santa Claus cap as she put a bulb on a Christmas tree. Money and offers rolled in, but as she recalled years later, she was becoming depressed.

In 1955, she received a summons from a Senate committee headed by Senator Kefauver, a Tennessee Democrat, that was investigating pornography. She was never compelled to testify, but the uproar and other pressures drove her to quit modeling two years later. She moved to Florida. Subsequent marriages to Armond Walterson and Harry Lear ended in divorce, and there were no children. She moved to California in 1978.

For years Ms. Page lived on Social Security benefits. After a nervous breakdown, she was arrested for an attack on a landlady, but was found not guilty by reason of insanity and sent to a California mental institution. She emerged years later as a born-again Christian, immersing herself in Bible studies and serving as an adviser to the Billy Graham Crusade.

In recent years, she had lived in Southern California on the proceeds of her revival. Occasionally, she gave interviews in her gentle Southern drawl, but largely stayed out of the public eye — and steadfastly refused to be photographed.

Here's a gallery link for her: