Not a doctored photo: proof that Obama is indeed "magical" as the song title postulates?
The guy's not even in office yet and the American sense of inappropriate humor has already hit the launching pad, and I'm the first to admit I giggled when I read this. Hey, it could have been worse; at least the song wasn't entitled "Barack Me Amadeus" or some shit... From CNN:
RNC CHAIRMAN CANDIDATE DEFENDS 'BARACK THE MAGIC NEGRO' SONG
By Rebecca Sinderbrand CNN 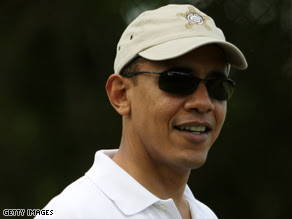 (CNN) -- A candidate for the Republican National Committee chairmanship said Friday the CD he sent committee members for Christmas -- which included a song titled "Barack the Magic Negro" -- was clearly intended as a joke.

The title of the song about President-elect Barack Obama was drawn from a Los Angeles Times column. "I think most people recognize political satire when they see it," Tennessee Republican Chip Saltsman told CNN. "I think RNC members understand that."
The song, set to the tune of "Puff the Magic Dragon," was first played on conservative political commentator Rush Limbaugh's radio show in 2007. Its title was drawn from a Los Angeles Times column that suggested President-elect Barack Obama appealed to those who feel guilty about the nation's history of mistreatment of African-Americans. Saltsman said the song, penned by his longtime friend Paul Shanklin, should be easily recognized as satire directed at the Times.

The CD sent to RNC members, first reported by The Hill on Friday, is titled "We Hate the USA" and also includes songs referencing former presidential candidate John Edwards and the Rev. Jeremiah Wright, among other targets. According to The Hill, other song titles, some of which were in bold font, were: "John Edwards' Poverty Tour," "Wright place, wrong pastor," "Love Client #9," "Ivory and Ebony" and "The Star Spanglish Banner."

Saltsman was national campaign manager for former Arkansas Gov. Mike Huckabee's presidential bid in 2007 and 2008. Before that, he held a variety of posts, including a number of positions under former Sen. Bill Frist of Tennessee.
Posted by Bunche (pop culture ronin) at Friday, December 26, 2008

Seems to me that only someone with some black in 'em is qualified to determine if someone fits the bill of "magic negro."
;-)

Then, again, my black wife thinks "Hancock" is a magic negro movie (sight unseen as yet, mind you)...however, she isn't a geek like me so she doesn't understand that a black superhero and a magic negro are two entirely different things. She must still be stinging over "Baggar Vance." (Not to mention "The Green Mile")

Not having heard the songs, I couldn't possibly comment on whether they're funny, but I do recall that Mike Huckabee's campaign commercial with Chuck Norris in it was hilarious, so if this guy had anything to do with THAT, then THIS little album might actually be some worthy satire.

No, it's really not.

The song is a grotesque parody of a "ghetto dude" who's pissed because Obama isn't "black enough" to represent him. The initial jab at Stanley Crouch and other cultural critics - which might have been funny if handled well - is lost in a cascade of ethnic stereotypes and pseudo-Ebonics. That Rush Limbaugh, the Jabba the Hutt of Caucasian pigginess, found it funny says all you really need to know.