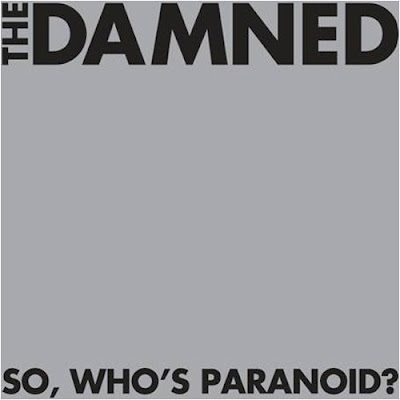 The Damned are back with their tenth studio album, the previous being 2001’s GRAVE DISORDER, and to a greater degree than that record they’ve turned in yet another mixed bag.

As anyone who knows me well can tell you, I love the Damned, rating them at number three on my list of all-time favorite bands (coming in behind the Cramps, with Devo in the number one slot) and the reason they keep their place at number three is due to their incredibly inconsistent output. I’m talking in terms of musical flavor, not their sporadic album release rate, and while I salute them for their willingness to experiment and not necessarily pigeonhole themselves within the confines of their status as elder statesmen of original British punk — for those who don’t know, the Damned claim a place in punk rock history for being the first British band of the movement to release a single and an album, waaaaaay back in the stone age of 1976 — we are yet again handed a sampler of well-crafted musicianship that struggles to find its own unique voice or flavor that says “This is the Damned.”

After having absorbed each of the band’s studio albums and many of their (often dodgy) live recordings, I’ve noticed a pattern evident since the largely brilliant MACHINE GUN ETIQUETTE (1979) in which any given Damned offering will feature some of the straight-up tongue-a’-lollin’, arms-a’-flailin’ UK-style punk numbers that inspire an impromptu modified Charleston in many of their listeners (including Yer Bunche), attempts at post-NUGGETS psychedelia and the by now de rigueur flamboyant posturing of diminutive vampiric frontman Dave Vanian (who, despite often veering into outright Broadwayism, gets my vote as the smoothest vocalist in the genre). All of which adds up to Damned albums that never fully satisfy anyone in their loyal audience, and considering just how good their punk work is when they’re firing on all cylinders it can be an extremely frustrating experience to remain a supporter of the band if what you’re looking for is the seriously rockin’ stuff. I can take some of their psychedelic output — if I want that stuff I can always listen to the real thing, (Elvis voice) thenkyooverramuch — but the over-the-top theatrical stuff that makes the Goth contingent swoon makes me want to eat my own ballsack, so when it comes to Damned records, in the case of my own listening experience it’s an exercise in musical cherry-picking. So in that sense while the Damned’s aural grab bag can be read as inconsistent, their output has managed to stay consistently inconsistent for three decades and I guess those of us who continue to follow them have to accept them for what they are and love them when they provide us with whichever of their musical stylings appeal to their diverse supporters.

This current album repeats the aforementioned pattern but suffers from many of its songs sounding like another group trying their hand at mimicking the Damned, an effect I found particularly disheartening. Let's break it down track by track:

“A Nation For Heroes”-opens the album with a tone similar to GRAVE DISORDER’s excellent “Democracy” and parts of it sound like that album's "Neverland," but while listenable enough it’s rather forgettable.

“Under the Wheels”-a good rocker that grew on me upon further listenings.

“Shallow Diamonds”-a shallow song about singers who sing shallow songs about diamonds…What the fuck??? If this is supposed to be ironic self-commentary, it’s not clever and wastes the listener’s time.

“Dr. Woofenstein”-this is what would most likely happen if Dave Vanian were given free reign to write a Gothic Broadway musical a la SWEENEY TODD, operating as it does within similar introductory/exposition territory to Sondheim’s “The Ballad of Sweeney Todd,” and its derivative/wannabe nature makes it all the more pitiful.

“Since I Met You”-a sort of tongue in cheek parody of love songs that seeks to have its cake and eat it too, but falls flat on its overblown face.

“A Danger to Yourself”-a decent rocker, but nothing remarkable.

“Maid For Pleasure”-the story of a transvestite maid who finds sexual fulfillment during chores for a cruel "lady master," this bit of social commentary yields the album’s best number. If you aren’t interested in downloading the MP3 of the whole thing, this is the one song to shell out the cash for.

“Nature’s Dark Passion”-strictly for lovers of Vanian’s ham-handed theatricality. I dread this one being on the set list when I see these guys this New years’ Eve.

“Little Miss Disaster”-featuring keyboard work reminiscent of live Toyah Wilcox circa “Good Morning Universe,” this one’s a solid rocker that could serve as an anthem for precocious teenage girls.

“Just Hangin’”-maybe a tune about George W. Bush, maybe not. Either way it’s just kinda there.

“Nothing”-the opening sounds like “Street of Dreams” from the band’s 1985 Goth-fest PHANTASMAGORIA but the song immediately shifts gears to become one of the band’s signature straight-up tongue-a’-lollin’, arms-a’-flailin’ modified Charleston numbers that I enjoy so much. Fun stuff.

“Dark Asteroid”-a decent bit of psychedelia that seriously wears out its welcome about five minutes into its fifteen-minute (!!!) running time, eventually devolving into what feels like whale-song superimposed with Doors-style organ and almost-parodic ethereal “aaaaaaaaaaah” vocalizing. Self-indulgent to the extreme. Note from the future: I have since changed my mind on this one and now love it. Go figure.

Depending on what you’re looking for, SO, WHO’S PARANOID? is worth checking out but the bulk of its contents simply won’t stand up to repeated listening, so caveat emptor, especially if you aren’t a Damned die-hard. For the layman who may wish to check out what the Damned are all about in all their glory, I recommend full albums DAMNED, DAMNED, DAMNED (1976), MACHINE GUN ETTIQUTTE (1979) and GRAVE DISORDER (2001), and compilatons THE BEST OF THE DAMNED, DAMNED BUT NOT FORGOTTEN and THE LIGHT AT THE END OF THE TUNNEL (there are those who would recommend the band's headlong leap into Goth/romantic foofery, PHANTASMAGORIA, but all of the good bits of that one can be had on THE LIGHT AT THE END OF THE TUNNEL). And whatever you do, avoid 1995's NOT OF THIS EARTH (aka I'M ALRIGHT JACK AND THE BEANSTALK) like it was ten pounds of raw, unshielded plutonium. It's an outright piece of shit without one good track on it and it's the only Damned album I listened to once and traded in at a used record store immediately thereafter.
Posted by Bunche (pop culture ronin) at Monday, December 15, 2008

I really enjoyed So, Who's Paranoid?, myself, but also agree laregly with your assessments. (I actually rather like "Dr. Woofenstein," but then I see it as a tongue-in-cheek steampunkish answer to Dr. Horrible's Sing-Along Blog, The Supervillain Handbook, "Skullcrusher Mountain," and other pulpy supervillain send-ups.) And yer right about "Diamonds" - it got old for me in a hurry!

This album is in no way comparable to Damnned, Damned, Damned, Machine Gun Etiquette or even Strawberries. That said, I found its sheer, engaging energy really entertaining. I don't look to the album to be a return to form - they're too old for that. For a group that hit its 30th anniversary three years ago, though, it's pretty good stuff. Or at least, it's much better than anything I've heard passing as a recent "rock" album since Thea Gilmore's Songs From the Gutter and the new Metallica album (good mostly in comparison to everything else they've released in the last two decades - what the FUCK is up with that?). Certainly light-years better than Axl Rose's lame disasterpiece... but then, I wrote a whole article on that subject a week or two ago.