TWO GREAT THINGS THAT GO GREAT TOGETHER: HOKUSAI AND KING GHIDORAH MERGE IN A PORNOGRAPHIC HOMAGE 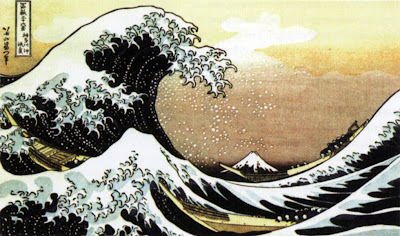 God damn it, I love the Japanese. A fascinating people for a million reasons, their art is among my very favorite on the planet and I hold the work of Edo period painter and printmaker Hokusai (1760-1849) in the highest regard. His sense of color and composition was impeccable and his work has crossed the barriers of international culture to be deservedly revered by art historians and casual observers alike. Best known for his instantly recognizable "The Great Wave Off Kanagawa," the gifted artist was also responsible for some very imaginative shunga pieces (aka erotic prints) that stood head and shoulders above the run of the mill kimono smut crafted by some of his contemporaries. My favorite of his contributions to the genre — in fact my favorite piece by the guy, period — is "Dream of the Fisherman's Wife" (approx. 1820), a filthy yet charming work depicting a nude woman laying flat o her back at the bottom of the ocean being given what looks to me like some serious head by a huge and very friendly octopus while a smaller eight-legger delights her with a kiss. 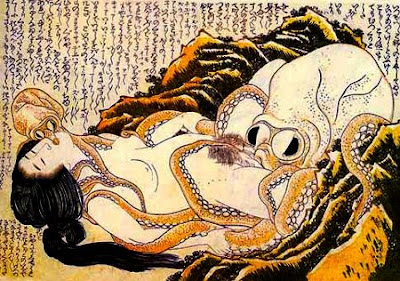 "Dream of the Fisherman's Wife," a fun frolic with a couple of friendly cephalopods.


Like something from the pages of a classily-produced Tijuana Bible, the piece titillates, amuses and perhaps even disgusts thanks to its fusion of the shunga genre's "anything goes" attitude, exaggerated genitalia (though the vaginal equipment seen here is considerably more restrained than most other such depictions that I can think of) and its employment of bestiality involving tentacled sea-dwellers usually scooped from their watery home and devoured right next to heaping helpings of tuna and other assorted sashimi. Personally, I don't find it the least bit offensive and when I first saw it some twenty-three years ago I laughed my ass off.

Along with a love of Hokusai's stuff I also have a burning passion for Japan's wild and crazy bestiary of giant monsters — or daikiju for my fellow purists/geeky shitheads — many of which sprang from the Toho Studios opuses helmed by the late, great Eiji Tsuburaya. One of the most popular of those creatures was the visually-impressive and incredibly destructive extra-terrestrial menace King Ghidorah, best known to us Western devotees to the genre as simply Ghidrah (the most common of the name's several transliterations into English). 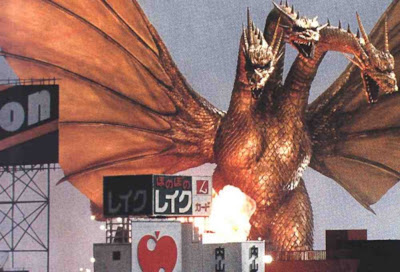 A gigantic, golden-scaled, winged three-headed nightmare that spits lethal microwaves, King Ghidorah is one hell of a sight to see (especially while zonked on mushrooms) and he's been brought back to the screen several times since first bursting to life from inside of a flaming meteor in 1964. But never in my most insane imaginings did I ever expect to see this enemy of both Godzilla and the entire world put to lewd use in an homage that incorporates the seemingly disparate influences of giant monster movie mayhem, the popular schoolgirl exploitation genre, "tentacle porn" and a Hokusai classic. Illustrator Mokoto Aida manages to pull all of that together in the impressive "The Member of the Giant Ico Chan Vs. King Gidora" from 1992. 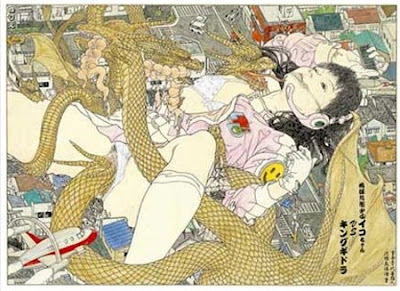 Needless to say, I must obtain a print of this ludicrous and lewd masterpiece.


It's an interesting piece and it works for what it attempts to do in a post-LEGEND OF THE OVERFIEND kind of way, but thankfully removes the agonizing rape/explosive mutilation angle to create an oddly detached fantasy mood. If this piece is meant to depict Toho-style scale of enormousness, the woman must be gargantuan indeed and one can only imagine the reaction of fleeing citizens when faced not only with their homes being utterly destroyed by giants (again, for fuck's sake!), but also with the incredible sight of a schoolgirl (or does the headset indicate that she's a flight attendant?) with her thighs splayed wide, skirt hiked up and one of King Ghidorah's heads lodged deep within her Holland-Tunnel-sized vagina. The giantess does not seem terribly perturbed by this state of affairs and appears to be involved in a dreamlike state, but one apparently not as pleasurably moving as that of her fishwife predecessor from just shy of two centuries past.

I don't know about the rest of you daikaiju cognoscenti, but I wonder what King Ghidorah's distinctive warbly cries would sound like when muffled by those colossal samurai sugar walls...
Posted by Bunche (pop culture ronin) at Saturday, December 06, 2008

PS: Can you believe that last quarter I had a whole class in which not one of them could tell me who Andy Warhol was? IN A FUCKING ART COLLEGE! Kids today...

"The Member of the Giant Ico Chan Vs. King Gidora" -It doesn't look to me like she's fighting him at all! wTF?

And that fisherman's got his hands full with that wife, yes indeed.