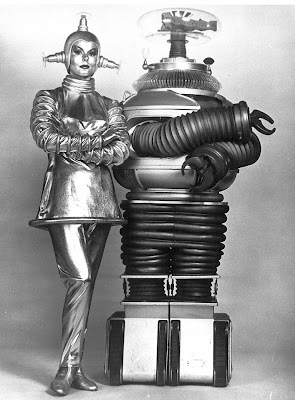 Verda and the Robot represent for automatons everywhere. Word!

I've had the Robot from LOST IN SPACE on my mind for some reason, and while thinking about him I reaffirmed my belief that he's the greatest of all fictional automatons, robots, droids or whatever you may choose to call them. He was more human than nearly every other resident of the Jupiter 2, played the guitar, schooled young Will Robinson about "the female of the species," gave as good as he got from Dr. Smith (no mean feat that) and memorably got shitfaced on tequila with Chavo the space-Mexican. No doubt about it, Robot was the shit and I intend to examine him along with some of his metal sci-fi brethren and prove conclusively that none of them are fit to walk in his tread-prints, so get ready with your well-reasoned points of dissent.
Posted by Bunche (pop culture ronin) at Thursday, December 04, 2008

He kicks ass and has such a simple classic design too.

Obviously the best criteria for judgement would be how great a sex toy the action figure would make.

In this respect I think B9 runs neck and neck with Dalek.

Cmdr. Data is fully functional, programmed in multiple techniques, but I think he's in a different division.

The Robot is a pussy!!

Cmdr Data plays for the other team...not that there's anything wrong with that!!