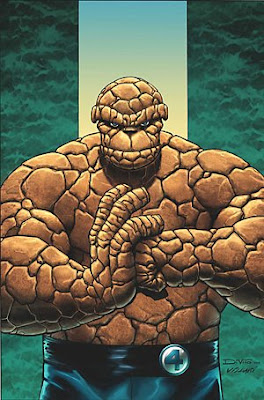 As I write this it's not even noon here in beautiful Park Slope, Brooklyn, but in some places in the world it's sundown or later, so Happy Hanukkah to Red Sea Pedestrians everywhere! But my seasonal greeting is meant most especially to all Vault readers who celebrate the holiday, and Jewish Warrior Princess, a group and an individual without whom my life would be much poorer.

And some of you may be asking "Why the hell does Bunche have an image of Ben Grimm, the Thing out of the Fantastic Four, on a Hanukkah post?" What? You didn't know Ben's one of the Chosen? Read more comics, damn yer eyes! (I know there are those of you who favor Kitty Pryde as the Jewish superhero of choice, but if that's the case you just ain't read enough about Ben.)
Posted by Bunche (pop culture ronin) at Sunday, December 21, 2008

Hey, thanks! Appreciate the aleph bets, too. Good stuff.

To me, Superman is about as Semitic as they come. Kal-El? C'maaaaaahn!!!