SHE CRUSHED ON SPOCK AND GAVE VOICE TO THE ENTERPRISE: R.I.P. MAJEL BARRETT RODENBERRY (1932-2008) 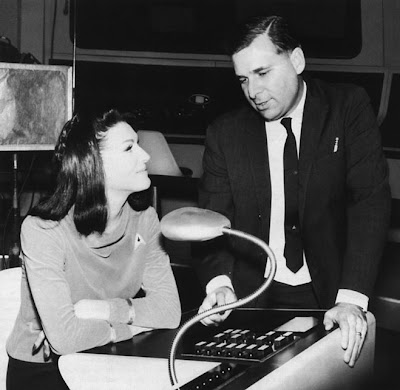 Majel Barrett as Number One on the set of the first STAR TREK pilot, "The Cage," with future husband Gene Roddenberry, creator of what would become a media juggernaut.

The third the original crew members of STAR TREK’s U.S.S. Enterprise has passed on, and perhaps no one in the history of the venerable sci-fi franchise multi-tasked the way Majel Barrett Roddenberry did.

Back in the days when Ye Olde TREK was just getting off the ground as a pilot (1965), Majel Barrett was tapped to play Captain Pike’s second-in-command, a cool and efficient brunette known only as Number One, and her character was memorable for her no-nonsense attitude during a time when women on TV were mostly wacky housewives or pieces of arm-candy to be rescued by the likes of Little Joe Cartwright or Paladin. 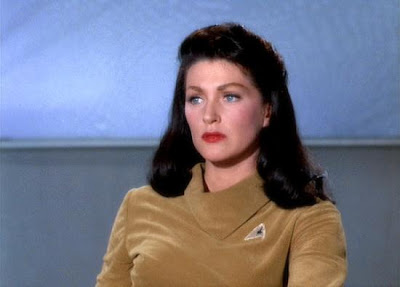 Number One.
Sadly Number One didn’t make it past the first pilot and when a second pilot was ordered, much of her stoic demeanor was transferred to the still-in-progress version of Mr. Spock, thereby giving us one of the most beloved characters in television and sci-fi history, so I’d say it was more than a fair trade-off. 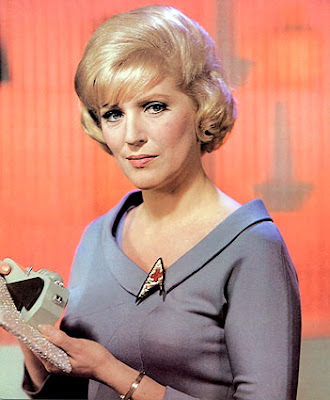 When STAR TREK was picked up as a series, Barrett was added to the cast in a recurring supporting role as Nurse Christine Chapel, assistant to the irascible Dr. McCoy, as well as the voice of the Enterprise’s computer, a role she carried over to THE NEXT GENERATION, and as assorted Federation computers in DEEP SPACE NINE and VOYAGER. And during THE NEXT GENERATION Barrett became the unstoppable and flamboyant Ambassador Lwaxana Troi, mother to hot ship’s counselor Deanna Troi and pain-in-the-ass bane of Captain Picard’s existence. 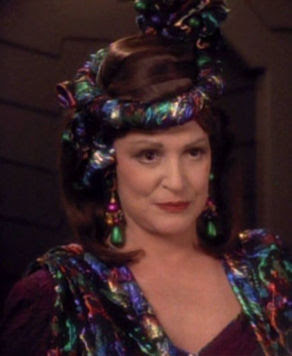 Lwaxana Troi.
Starting out as a broad caricature with a vast capacity to annoy the shit out of both her fellow characters and the viewing audience, Lwaxana swiftly grew into a character whose irritating and overbearing manner was revealed as something of a mask covering a life marred by long-buried tragedy. As her character evolved I actually was glad to see her whenever she showed up, especially when featured on DEEP SPACE NINE in an environment far removed from the squeaky-clean wholesomeness of the Picard-era Enterprise. 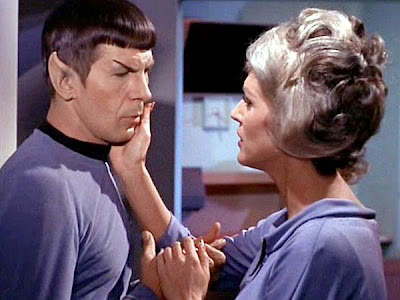 Chapel expresses her feelings for Spock: an exercise in outright futility.

But Barrett was best known for her role as Nurse Chapel, an otherwise level-headed and competent medical technician who got all gooey whenever Mr. Spock would enter the room, and it was her ardent but utterly futile love for him that endeared her to us. We all dug Spock and how totally awesome he was, but his painful self-denial of his human side could not allow him to return her affection in the way that she deserved, and that’s just plain sad for both of them but most especially for Chapel. After all, unrequited love is one of the most universal and agonizing of human experiences, so who couldn’t relate to her plight?

When the original STAR TREK basically flopped and was finally cancelled in 1969 after three seasons (after being saved from cancellation at the end of season two by a famous fan-driven letter campaign), Barrett married series creator Gene Roddenberry and remained a mainstay in the TREK empire until her demise, becoming referred to as “the First Lady of Star Trek.”

Roddenberry died at her home in Bel-Air after a battle with leukemia, said family spokesman Sean Rossall. "She was a valiant lady," Leonard Nimoy, who played Mr. Spock on "Star Trek," told The Times. "She worked hard, she was straightforward, she was dedicated to 'Star Trek' and Gene, and a lot of people thought very highly of her."

Once dubbed "The First Lady of 'Trek' " by the Chicago Tribune, Majel (sounds like Mabel) Barrett Roddenberry was associated with "Star Trek" from the beginning. In the first TV pilot, she played a leading role as Number One, the first officer who was second in command. But at the request of various executives, changes were made, and she did not reprise her role in the second TV pilot. Instead, she played the minor role of Nurse Chapel when the series began airing on NBC in September 1966.

Roddenberry, whose pre-"Star Trek" acting career included guest appearances on series such as "The Untouchables" and "The Lucy Show," had no idea she was establishing a career path in science fiction when she took her first "Star Trek" role. "Not at all," she said in a 2002 interview with the Tulsa World. "I certainly didn't have any idea that I'd be doing it this long, for so many different shows and films -- especially as a product of a series that was a flop. The original was only on for three years. It wasn't considered a success by anyone's standards."

The show took off as a pop-culture phenomenon after it went into syndication, however, and Roddenberry, who was married to Gene Roddenberry from 1969 until his death in 1991, attended her first "Star Trek" convention in 1972. "You know, when the conventions started out, I'd attend four or five a month," she said in the 2002 interview. "But after a while, it got where there was no time for anything else. You'd just travel from city to city, making the same speech, answering the same questions." Rossall said both Gene and Majel Roddenberry maintained warm relationships with "Star Trek" fans. And as late as August, he said, Majel Roddenberry attended a "Star Trek" convention in Las Vegas. As she told the Buffalo City News in 1998, "It's been a hell of a ride."

Born Majel Hudec in Columbus, Ohio, on Feb. 23, 1932, she attended the University of Miami and acted in regional theater before heading to Hollywood in the late '50s. Several years after her husband's death, Roddenberry discovered a pilot script and notes he had written for a series in the '70s. And in 1997, with Majel Barrett Roddenberry as an executive producer and playing a recurring role, "Gene Roddenberry's Earth: Final Conflict" began airing in syndication. She later was an executive producer of the syndicated "Gene Roddenberry's Andromeda."

She is survived by her son, Eugene "Rod" Roddenberry Jr. Roddenberry had a love of animals and was dedicated to animal rescue. Instead of flowers, the family suggests donations in her name to Precious Paws, www.preciouspaws.org, or CARE (Cat & Canine Assistance, Referral and Education), www.care4pets.org.

Bunche, this was a great tribute to a great lady. Thanks very much.