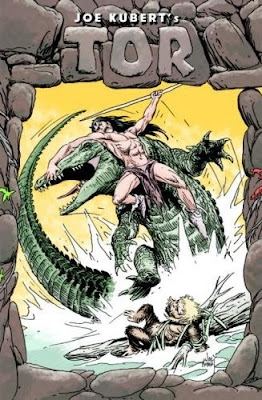 This hardcover collection of the recent six-issue DC Comics mini-series is due out in March and I have decidedly mixed feelings about it.

A PREHISTORIC ODYSSEY is the latest installment of comics grandmaster Joe Kubert's would-be caveman epic featuring Tor, a rather generic stone-age hero who, barring minor facial differences and footwear, is a dead ringer for the artist's signature rendition of Tarzan of the Apes but not one eighteenth as interesting. Tor, after being kicked out of his tribe for being demonstrably smarter than the rest of his people — demonstrating this by improving the means for catching greater amounts of food with maximum efficiency, crafting advanced tools via stone-knapping, and the invention of the Mullet (no, seriously!) — sets off on the well-worn (and in this case tired) Campbellesque "hero's journey" into the unfamiliar wilderness, there to be tried by hostile forces of nature, monsters and other disgruntled QUEST FOR FIRE rejects. Our hero encounters groups of shaggy ape-men, rescues a shaggy child from what is perceived to be a sacrifice (the kid then becomes a tagalong annoyance toward whom Tor eventually warms), faces an alligator and a tiger, falls in with a bunch of misshapen prehistoric freaks (exactly what they are is left unclear) including a topless woman with jet-black skin and a long mane of snow-white hair who ends up as his lover, runs afoul of two more ancient and bestial races (including a bunch of what could best be described as an ageing tribe of Yeti), is nearly made a meal of by a huge Lovecraftian wiggly (paleontological accuracy is obviously not a consideration here), endures torture and near-sacrifice a couple of times, and whole bunch of other rote shit that we've all seen about a million times since the dawn of pulp fiction.

The story here is a strictly-by-the-numbers, sub-par Edgar Rice Burroughs knockoff (reminding Yer Bunche of some of ERB's Pellucidar yarns, which, to be honest, weren't all that in the first place) whose narrative could easily have been told in a single issue rather than a wholly unnecessary six, and as if the story weren't uninteresting enough, Kubert actually has the nerve to end the damned thing in such a way as to leave the door open for the continuing so-so adventures of Tor and his nameless jet-black squeeze. (After kicking the ass of a senior citizen Yeti who wants to use Tor's woman as breeding stock because all the Yeti chicks are too old and bred-out to be viable for procreation, Tor and his woman walk off into the snowy distance. THE END.)

But while the story is a mediocre cavalcade of "been there, done that" caveman adventure malarkey, it's key to remember that Joe Kubert's strengths have never been rooted in his scripting. The guy's no writer, but he sure is one hell of an illustrator, one of my very favorites in fact, and his fantasy world in which prehistoric man lives in the same space as dinosaurs and creatures that only existed in their illustrator's imagination is very much a fully-realized and believable entity, even with its over-the-top fantastic elements taken into consideration. Kubert's mastery of the visual storytelling medium is evident in every panel and the story is seamlessly propelled along with only the most simple of narration, text that reads like a stripped-down and almost unnoticeable version of Hal Foster's integration of written bits into the incredible tableaus of his classic PRINCE VALIANT strip. The sparse narration works in favor of the visuals, not focusing the reader on Kubert's inadequacies as a scripter and instead allowing his flair for visceral depictions of ERB-style savagery to play out to bloody and sometimes agonizing results. (There's a bit when Tor and his woman fight off a hostile group of albino cavern-dwellers and the woman uses her nails to pretty much rip an enemy's face right off of his head, and I have to admit I didn't expect that level of very nasty violence from a class act like Kubert. But that's not to say I'm complaining!)

So what the reader is left with is a graphic novel that bites the big one as a scripted narrative, but completely rules as an example of what happens when one of the seminal creators in the medium is allowed to hit the drawing board with minimal editorial interference (as is evident from the uncorrected spelling errors) and a pen full of old school piss and vinegar. It's visually beautiful but a derivative dud otherwise, and it should only be picked up by hardcore Kubert completists or those who care nothing whatsoever for the quality of a story's written narrative and are satisfied by the kickass visuals provided. If you fall into the latter category, by all means dig in. If not, you are advised to give this a miss unless somebody hands it to you as a gift (or if you receive it as a part of your assignments as a freelance reviewer).
Posted by Bunche (pop culture ronin) at Thursday, December 11, 2008

Hi, this is Bill from the Uranium Cafe, thanks for the Romper Stomper. You have a site with lots of writing!!! Haha, and I am pressed for time now but want to red your post on John Lennon later. I skimmed over things and you have a great writing technique.

By the way, I love Joe Kubert. His sort of zen style pen/brush and ink work was powerful and it was nice to see a whole page rendered by this man. The complete layout always look awesome, pager after page.