There's been a lot going on (surviving the boredom of Christmas in Westport, Ct. would try even Golgo 13) so I haven't had time to come up with a proper post for today, and for that I apologize. But at least I'm back in Brooklyn and will hopefully have something for tomorrow, but until then I leave you with this shot of my third favorite band in the world, The Damned, whom I will be seeing on New Year's Eve. 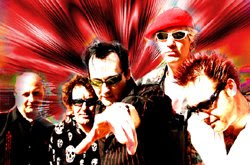 For the most part 2008 sucked moose dick, so ringing in the new year to the velvet tones of my man Dave Vanian crooning two of the greatest songs ever recorded, "New Rose" and "Plan 9, Channel 7," will be a good way to launch 2009. Let's just hope that beret-crowned loon Captain Sensible will get naked as he usually does during their shows.
Posted by Bunche (pop culture ronin) at Sunday, December 28, 2008

Damn it (ha ha)... that's what I should be doing on New Year's Eve but of course, all tickets are gone and none even on the ticket seller sites either.