I'm late to the party that is Showtime's DEXTER series but as of last night I've seen the first two seasons and rather enjoyed them, but before I get around to doing a review of the series in general I simply have to say that the element that really kept me glued to the screen during season two was the character Lila Tournay. A raven-haired British installation artist whom the series' serial-killer/forensics expert protagonist meets during a series of Narcotics Anonymous meetings, Lila's seductive charms set off every alarm bell in my well-honed (but more often than not ignored) crazy/dangerous woman radar sense, and the shit she gets up to... Jeeeeeee-zuss!!! 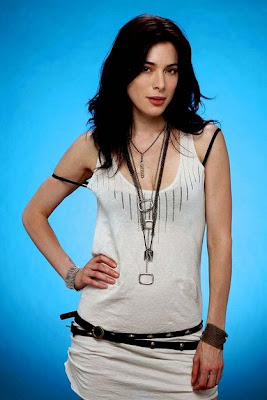 I know from crazy chicks — once memorably dating a girl whose propensity for wanting to extinguish lit cigarettes on my Johnson clued me in to the fact that she might not be totally right in the head — so Lila's antics touched me in a very real and frightening place and Jaime Murray's performance in the part will stick in my head for some time to come. I won't reveal anything else and I'll leave you with a strong recommendation for the show, but especially for season two and the highly unstable terror brought to the table by Lila. Dexter may be a master of the art of stealthy serial murder, but I'd trust him a hundred times over before getting within twenty yards of Lila, and you can take that shit to the bank, Jack!

(Ironically, as I write this I'm listening to the Damned's recent tune "Little Miss Disaster," and while I have Lila on the mind it takes on a whole new meaning!)
Posted by Bunche (pop culture ronin) at Tuesday, December 16, 2008

Yeah she has real presence. I first noticed her in a movie called - The Deaths of Ian Stone.

"Extinguish lit cigareets on ye'r Johnson, y'say? No, I wouldn't blame thee for not wanton to date a girl who smooked.

Personally, I draw the line at light matches with my johnson.

Thankfully, though, the closest I came to dating a "crazy chick" was when a manic-depressive gal (mostly depressive) in college took a shine to me. I don't think she fancied the use of hot objects, sharp implements or any other scary stuff.

Hope that most of your dating life has been more...sedate.