THE GREATEST MOVIE POSTERS EVER: NURSES FOR SALE (1971) 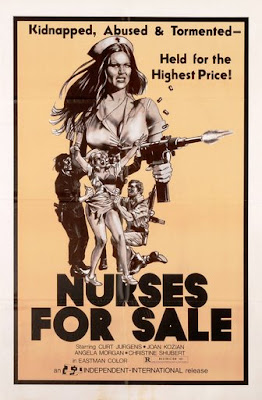 This one pretty much speaks for itself. I remember this playing at Norwalk Theater in the early 1980's, which leads me to wonder how many times it got re-released; it's a German flick that originally came out in 1971 and had its first U.S. screenings in 1977, and this poster features the image I recall from its newspaper ads during my misspent youth. Not very well executed, this poster nonetheless shows off some of the classic elements that make an exploitation movie poser work, namely a woman in peril getting her clothes ripped off by thugs, a fetish outfit (in this case the nurse's uniform) and a hot chick in the aforementioned fetish uniform armed with a blazin' machine gun. Even if the movie sucked, the poster's a whole lot of fun.
Posted by Bunche (pop culture ronin) at Monday, December 01, 2008

What was the last good movie poster? I don't know what year the movie poster died but it had to be in the late Eighties.

Re: What was the last good movie poster?

Unlike comic covers (which I happen to agree with you on), there are still effective movie posters still made, in my opinion...

It helps that "iconic" images lend themselves better to film than comix.