THINGS TO PONDER REGARDING A SEASONAL CLASSIC 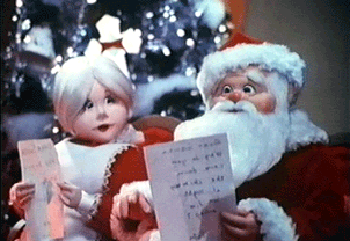 Santa and Jessica read the script to their own special and are stunned by a budding stoner's interpretation of it.

One of the most cherished of the Rankin/Bass stop-motion animated holiday television specials is 1970's SANTA CLAUS IS COMIN' TO TOWN, the first of two such specials to detail the origin of the jolly spirit of gift-giving (the other being the seldom-seen and rather pagan THE LIFE AND ADVENTURES OF SANTA CLAUS), and I try to catch it each year when it runs. I missed it this go-round but I recently received an email from Lori, a friend from early in my misspent college years, that featured a Christmas card I made for her back in 1984 featuring some stuff I noticed about SANTA CLAUS IS COMIN' TO TOWN when seen from the point of view of a nineteen-year-old who had escaped the constrictive nest and had begun seriously sampling some of life's more questionable diversions. In other words, I saw Santa as kind of a conuter-culture stoner hero, and here are my observations of twenty-four Christmases past:

• Santa was an abandoned child (Was he illegitimate? Who were his parents?)
• He was raised at a matriarchal commune of elves in the middle of nowhere
• He was labeled as a hippie-type because of his “outlandish” clothes
• He gave away toys he made by hand (good ol' stoner creativity)
• He hung out with a penguin who wore a Doctor Who scarf (rather trippy)
• He could dance (as evidenced by his fancy footwork during “Put One Foot In Front of the Other”)
• He knew magic
• He had a gorgeous, curvy redhead for a girlfriend
• Said girlfriend never wore a coat in the snow, so you knew she was a hot woman
• He opposed an oppressive fascist state
• He was arrested for acts of sedition
• He’s an escaped criminal who was considered public enemy #1
• He gave drugs to reindeer
• He was forced to live undercover
• His disguise made him look sorta like Jerry Garcia

Not exactly comedy gold, but cut me some slack. It was twenty-four years ago.
Posted by Bunche (pop culture ronin) at Tuesday, December 23, 2008

If I'm not mistaken "The Life and Adventures of Santa Claus" gets shown on that strangely subversive cable channel known as ABC Family. Seriously, I was flipping channels once and they were showing the Stephen King "It" miniseries. Nothing says "family programming" like "homicidal clowns who like to kill kids," apparently.