SO PASSES THE CARETAKER OF DREAMS AND NIGHTMARES: R.I.P. FORREST J. ACKERMAN (1916-2005), FOUNDER OF "FAMOUS MONSTERS OF FILMLAND" 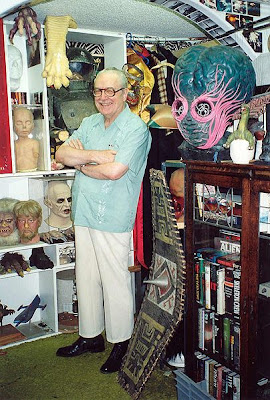 It is with immeasurable sadness that I relay the news of the passing of one of the greatest influences on "monster kids" like Yer Bunche, the legendary Forrest J. Ackerman, a fount of knowledge on the subjects of sci-fi (a term he is credited with having coined), fantasy and horror and founder of FAMOUS MONSTERS OF FILMLAND (along with publisher James Warren). When I was a monster-crazed youth, FAMOUS MONSTERS OF FILMLAND was just about the only game in town when it came to readily-available information about those beloved genres, and each issue was crammed with photos and articles that imparted as much story and behind the scenes poop as one could ever want, and introducing two fortunate generations of kids to the people who brought their favorite horrors to life. 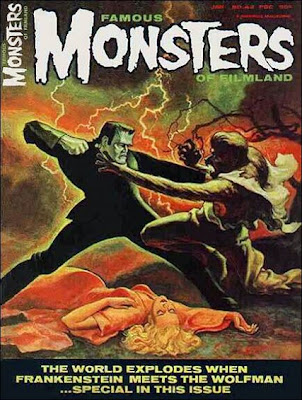 My first issue fell into my hands when I had just turned nine and it featured the first in-depth articles I ever saw recounting the making of my my all-time favorite movie, the 1933 KING KONG, which I had seen in its uncut form for the first time on the big screen just a year previous, and for me the magazine was a revelation. In fact that issue may be the defining moment when my kiddish enjoyment of such movies metamorphosed into full-fledged mania and a desire to absorb as much about this wondrous field of creativity as I possibly could. So, crazy and geeky though it may sound, Forrest J. Ackerman was my Yoda when it came to the cinema of the fantastic. 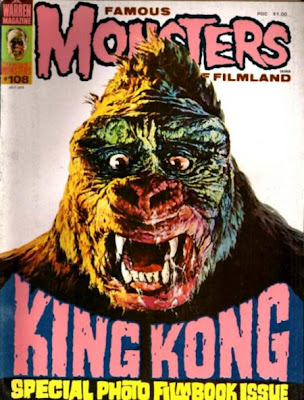 My first issue of FAMOUS MONSTERS OF FILMLAND: after this, there was no turning back. 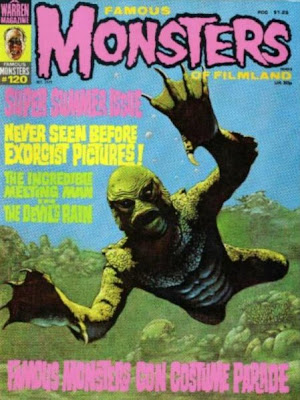 Would you believe "Forry" (as he was affectionately nicknamed) actually owned the Creature from the Black Lagoon suit, minus the head, hands and feet? Legend has it that he was passing by a house in California somewhere when he noticed the Creature suit among items left out to be taken away with the trash (!!!), so he rescued "Blackie" and added him to the unimaginable wonders that populated his home, fondly known to geeks everywhere as "the Ackermansion," a museum that I would kill to witness with my own eyes. Simply awesome, and definitely a repository for the things that dreams are made of.

I cannot thank Forry enough for his influence on me, and on behalf of all the grownup monster kids out there and for those who have no idea what they missed, I loved you, Mister Ackerman. Even though I never met you I always felt you treated me and your other readers like cherished friends and family, always respecting our intelligence and doing everything in your power to fan the flames of our fiendish fervor. You were one of this nation's (and the world's) living treasures, and your loss is a terrible blow. 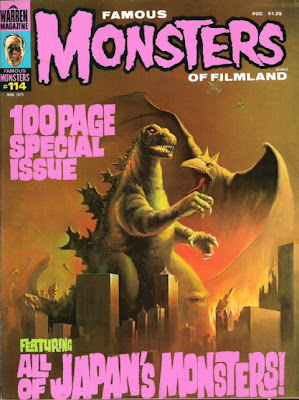 The Japanese monster issue: another turning point in the life of the wee Bunche.

No lie, I feel like I've lost a great mentor, and in truth that's exactly what I've...we've lost. Stay strong, my fellow horror kids. Stay strong. Forry wouldn't have wanted you to cry; he'd want you share the joy he introduced us to, and that's about as good a goal as I can imagine. 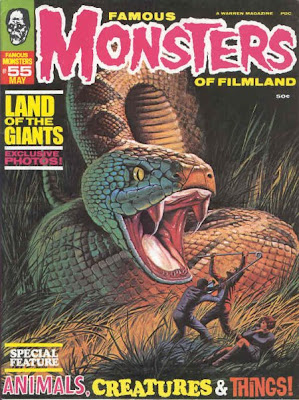 I have tears welling up in my eyes as I type these words, so I'll turn this over to the Associated Press. 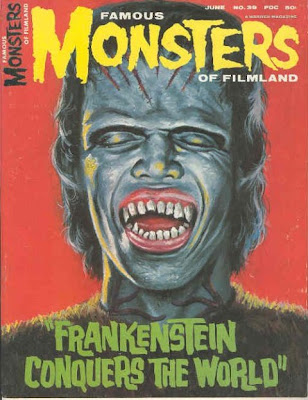 Although only marginally known to readers of mainstream literature, Ackerman was legendary in science-fiction circles as the founding editor of the pulp magazine Famous Monsters of Filmland. He was also the owner of a huge private collection of science-fiction movie and literary memorabilia that for years filled every nook and cranny of a hillside mansion overlooking Los Angeles. "He became the Pied Piper, the spiritual leader, of everything science fiction, fantasy and horror," Burns said Friday.

Every Saturday morning that he was home, Ackerman would open up the house to anyone who wanted to view his treasures. He sold some pieces and gave others away when he moved to a smaller house in 2002, but he continued to let people visit him every Saturday for as long as his health permitted. "My wife used to say, 'How can you let strangers into our home?' But what's the point of having a collection like this if you can't let people enjoy it?" an exuberant Ackerman told The Associated Press as he conducted a spirited tour of the mansion on his 85th birthday.

His collection once included more than 50,000 books, thousands of science-fiction magazines and such items as Bela Lugosi's cape from the 1931 film "Dracula."

His greatest achievement, however, was likely discovering Bradbury, author of the literary classics "Fahrenheit 451" and "The Martian Chronicles." Ackerman had placed a flyer in a Los Angeles bookstore for a science-fiction club he was founding and a teenage Bradbury showed up. Later, Ackerman gave Bradbury the money to start his own science-fiction magazine, Futuria Fantasia, and paid the author's way to New York for an authors meeting that Bradbury said helped launch his career. "I hadn't published yet, and I met a lot of these people who encouraged me and helped me get my career started, and that was all because of Forry Ackerman," the author told the AP in 2005. Later, as a literary agent, Ackerman represented Bradbury, Isaac Asimov and numerous other science-fiction writers.

He said the term "sci-fi" came to him in 1954 when he was listening to a car radio and heard an announcer mention the word "hi-fi." "My dear wife said, 'Forget it, Forry, it will never catch on,'" he recalled. Soon he was using it in Famous Monsters of Filmland, the magazine he helped found in 1958 and edited for 25 years.

Ackerman himself appeared in numerous films over the years, usually in bit parts. His credits include "Queen of Blood," "Dracula vs. Frankenstein," "Amazon Women on the Moon," "Vampirella," "Transylvania Twist," "The Howling" and the Michael Jackson "Thriller" video. More recently, he appeared in 2007's "The Dead Undead" and 2006's "The Boneyard Collection."

Ackerman returned briefly to Famous Monsters of Filmland in the 1990s, but he quickly fell out with the publisher over creative differences. He sued and was awarded a judgment of more than $375,000.

Forrest James Ackerman was born in Los Angeles on Nov. 24, 1916. He fell in love with science-fiction, he once said, when he was 9 years old and saw a magazine called Amazing Stories. He would hold onto that publication for the rest of his life.

Ackerman, who had no children, was preceded in death by his wife, Wendayne.
Posted by Bunche (pop culture ronin) at Friday, December 05, 2008

I, too, discovered Famous Monsters around the age of 7 or 8... I remember my Grandfather bought me a copy of that and some surprisingly gory shark attack magazine (Jaws was still huge) and I was hooked until the end. I remember when Fangoria came out and was geared toward a more mature audience... It stole a huge chunk of Famous Monsters audience - me included, (FM was the only game in town for years) but the editors of Fangoria still worshipped Forrie like a god. I owe my love of Harryhausen and Universal horror almost exclusively to FM... I hope they take his legendary horror collection and open a museum.

Issue #114 was a turning point for me, too. My Dad bought it for me in '75 or so, knowing how much I loved Godzilla. I got every copy of the magazine I or my parents could get our hands on after that, and had a full subscription from '76 to '79 or so, when James Warren crammed the fucking thing so full of Star Wars and Galactica shit that I gave up on it and started reading Fangoria instead.

I met Forry at several conventions throughout the '80s and '90s, and he was always a wonderful guy. He has provided an inestimable influence upon popular culture at large, and will be dearly missed.

(I wonder who'll be next - Bradbury or Harryhausen. They're both REALLY up there in years.)