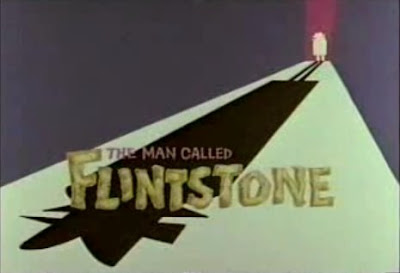 The original run of Hanna-Barbera's THE FLINTSTONES (1960-1966 and ad infinitum in syndication) holds a dear place in the hearts and minds of animation fans of a certain age and can rightly be described as a landmark in American television, its status as the first primetime animated series aimed squarely at a grownup audience and it being the first program aired in color on the ABC network (as of its third season; the first two were in black & white and later colorized) being merely two reasons it could be considered as such. Swiftly evolving past its origins as a literally two-dimensional knockoff of THE HONEYMOONERS, the misadventures of prehistoric everyman Fred Flintstone and his family and friends featured endless bad puns involving references to stone, crazy sight gags involving animals as assorted household appliances (many of whom would break the fourth wall and wearily state "It's a living!"), regular appearances of stone-age caricatures of movie, TV and pop music celebrities (usually voiced by the personalities being lampooned) — perhaps the most famous examples of this being "Ann Margrock" 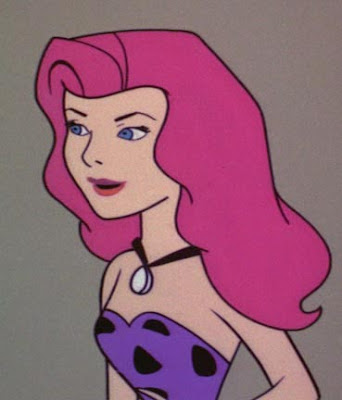 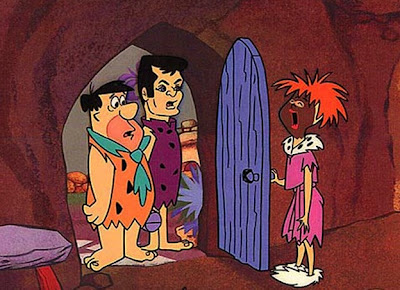 but when all was said and done THE FLINTSTONES was most simply summed up as a goofy take on American society at the time, and when at its best it was pretty damned funny, a fact all but obscured these days in the wake of nearly four decades of vastly inferior sequels, spinoffs, specials (the special where the Flintstones celebrate Christmas in an era loooooooooong before Jesus is particularly notable) and live-action versions. Believe it or not, there was even a proposed ethnic version of the series called THE BLACKSTONES — I shit you not!!! — that never made it past a concept drawing or two, lending further credence to my theory that the suits at Hanna-Barbera in the 1970's were out of their minds on mountains of blow. 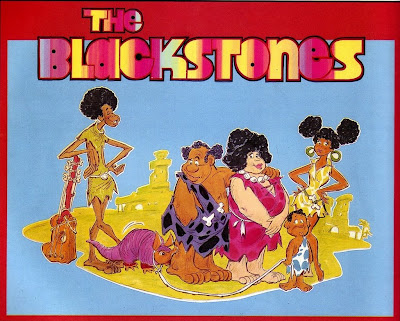 I swear to god I'm not making this up.
How else to explain the nigh-indistinguishable nature of post-SCOOBY-DOO, WHERE ARE YOU? shows like THE AMAZING CHAN AND THE CHAN CLAN, GOOBER AND THE GHOST-CHASERS, THE FUNKY PHANTOM, CLUE CLUB and others? Or, for that matter, the truly awful and now-forgotten FLINTSTONES knockoff set durning the days of the Roman Empire, THE ROMAN HOLIDAYS? Or the football-oriented WHERE'S HUDDLES, or....

I apologize. Let me wipe the foam from my mouth... There, that's better.

H/B cartoons after 1967 or so are a sore spot with me, and the mere thought of them grinds my gears. Anyway, back to THE FLINTSTONES.

Yes, the things that made the original series so much fun dwindled drastically with each new turd that fell from the fissure-riddled anus of the FLINTSTONES machine, so the existence of THE MAN CALLED FLINTSTONE is nothing short of a minor miracle. 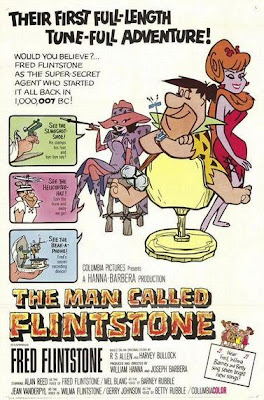 The 1966 theatrical release poster: an amusing lampoon of... 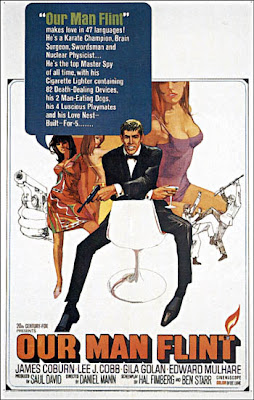 ...the one-sheet for the previous year's OUR MAN FLINT, considered by many to be the best of the Bond spoofs (I don't care what anyone says, I prefer DEADLIER THAN THE MALE).

Released at the height of the 1960's James Bond craze — to be precise, between the James Bond blockbusters THUNDERBALL (1965) and YOU ONLY LIVE TWICE (1967) — THE MAN CALLED FLINTSTONE is a feature-length 007 parody that puts the "modern stone-age family" and their neighbors/best friends, the Rubbles, through just about every 007 trope that existed at the time (let's face it; all the elements that we now consider carved in stone when it comes to a Bond plot were in place as early as GOLDFINGER, the third film in the series, and THE MAN CALLED FLINTSTONE came out just shy of two years later).

Opening with a great gag that substitues Wilma Flintstone for the Columbia Studios mascot, 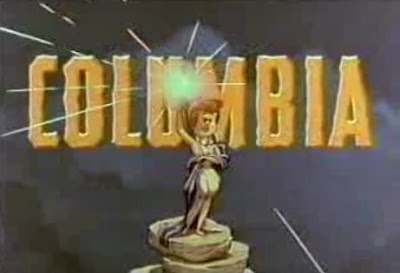 the film involves Fred becoming the unlikeliest of secret agents when the real deal, one Rock Slag, is seriously injured just before embarking on a mission of grave international importance; Slag's ongoing task has been to bring mysterious criminal mastermind/megalomaniac the Green Goose to justice before he takes over the world with a deadly missile, and his number one lieutenant, Tanya, volunteers to betray her boss in exchange for some "quality time" with the virile chick-magnet Slag, but Slag's hospitalization throws a monkey wrench into their rendezvous in Paris unless another option presents itself. 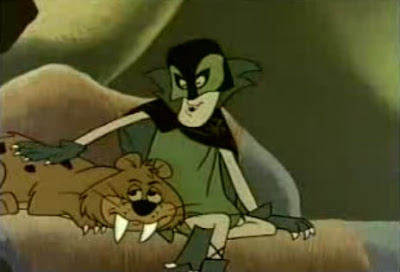 The Green Goose and his kitty, "Ferocious": Blofeld he ain't.
Luckily for the free world, Fred Flintsone just so happens to be an exact ringer for Rock Slag and gets recruited to work the mission as Slag's covert double, with all the perks of being a super-spy: gadgets, beautiful women, international travel and everything, all expenses paid. The one hitch is that Fred has to accomplish his goal during a family vacation to "Eurock" with the Rubbles in tow and he can't fill any of them in on what he's actually doing, so from there it's off to the races. 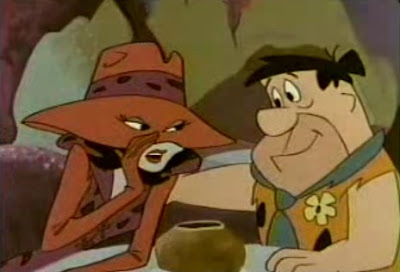 Fred meets Tanya, international woman of mystery. I've loved silly-yet-cool idea of the eye-holes in her hat since I saw this movie during a re-release when I was six.

The plot's kinda/sorta like a G-rated FROM RUSSIA WITH LOVE, bouncing the characters out of their familiar Bedrock locale to Paris and Rome, with Fred's closed regarding his mission leading to serious misunderstandings that make Fred appear to be cheating on Wilma (which, if you know anything about Fred, he would never dream of doing), but it all works out quite nicely in the end.

Yet that's not to say that the movie is an animation classic , although it works as a fitting coda to the original-era Flintstones. The film's few problems stem largely from two elements: the decision to make the content more kiddie-matinee-oriented than the more grown-up sensibility of the TV series and several musical numbers that range from passable to downright saccharine, especially two featuring toddlers Pebbles and Bamm-Bamm that may drive you to suicide. Horrendous musical numbers have been the bane of animated features since day one, made de rigeur by the early Disney opuses and thus imitated worldwide by other animators in the ensuing decades, but while Fred and the gang frequently engaged in musical bits on the TV series, those segments were more often than not entertaining — and in the case of Ann Margrock downright kickass — or great excuses for total silliness (the bizarre absurdity of the Way-Outs and Rock Roll's immortal "Bedrock Twitch being sterling examples), but the musical stuff here is quite lackluster with the exceptions being the excellent title song (accompanied by a fun parody of Maurice Binder-style 007 themesong credits), a Louis Prima tune during a sequence in Italy, and "Spy-Type Guy," a song illustrating the fantasies that run rampant through Fred's imagination upon being sworn in as a cloak-and-dagger agent. 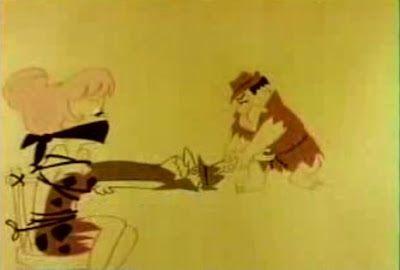 Fred imagines himself as a "Spy-Type Guy."
The other problem is a minor quibble voiced only by those of us who consider ourselves old school Flintstones geeks, and that has to do with the Flintstones having already mined this satirical territory in a televison episode aired just under a year before THE MAN CALLED FLINTSTONE was released, namely the 1965 episode "The Stonefinger Caper." It's a much tighter handling of the "Flintstones meet 007" concept, but that's what one would expect when trying to achieve the same results in a third of the feature's running time.

That said, THE MAN CALLED FLINTSTONE is still a lot of fun, especially if you enjoy the pre-1970's adventures of the characters. And (in my opinion anyway) it's a much better film than the current James Bond movie, QUANTUM OF SOLACE, and I say that as a firmly-entrenched 007 booster, so make of that what you will. 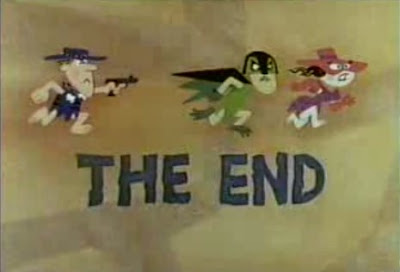 Yeah, that one's funny. My favorite Flintstones moment, though, is their classic Winstons ad:

I run that one for my animation class. It never fails to generate big laughs and interesting discussions.