THE GREATEST MOVIE POSTERS EVER: LUANA (1968) 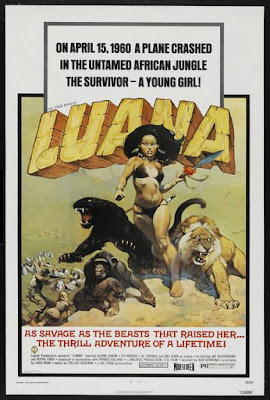 This West German/Italian co-production carries on the dreary tradition of jungle-girl movies that suck out loud, but when it was re-released in the early 1970's it was graced with a misleadingly awesome poster crafted by the great Frank Frazetta, perhaps the most influential fantasy illustrator of the past half-century. His archetypal covers for the 1960's editions of Robert E. Howard's Conan stories set the standard for how such stuff should look, luring the curious with images fraught with an air of explosive savagery and wild adventure to be had, elements that LUANA lacks in spades. But who cares? Sure it's another case of putting a Dior dress on a naked mole rat, but with a poster like this one there was no way I would have missed the flick had I been given the opportunity to see it on the big screen! In fact, that poster's so boss that even finally seeing the movie on DVD a couple of years ago did nothing to diminish my love for the one-sheet and I eventually bought one, setting me back by around a hundred-and-forty semoleans on eBay, but it was worth it. It's gonna look splendid when I get it framed and hang it on one of the walls here in the Vault. Umgawa!!!
Posted by Bunche (pop culture ronin) at Friday, December 05, 2008

So you think they offered Frazetta points to paint this poster? I can't imagine they had the budget to pay him his rate even at that time....

Most likely Frazetta got paid by whatever company it was that issued the tie-in paperback. I'm willing to bet that copies of that book sold purely because of his artwork. The cover was also memorably used on an issue of VAMPIRELLA.