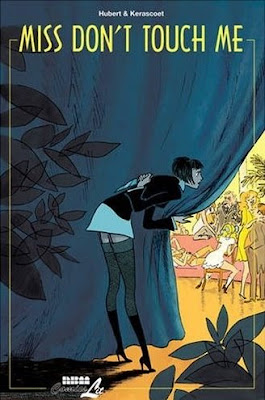 Another assignment in my capacity as a reviewer for a certain every-seven-days periodical geared toward the publishing industry, this graphic novel, a best-seller in its native France, is a look behind the scenes at a Parisian brothel in the days before World War One and follows Florence, a woman determined to avenge the murder of her best friend at the hands of a serial killer dubbed "the Butcher of the Dances" by the press. Her amateur investigation leads her to a high class brothel where she takes a job as the joint's resident "Miss Don't Touch Me," in which role she caters to the masochistic needs of the rich and powerful but retains her virginity. Florence's quest leads her (and the reader) into a world of fleshly pleasures and a rich cast of characters who bring what could have been a by-the-numbers bit of whorehouse titillation to vivid and engrossing life, portraying the whores and madams as well-defined individuals, most notably "madame-monsieur" Josephine and the doe-eyed and childlike Annette, the favorite of the most extreme paying sadists. And while this is a story steeped in the dynamics of day-to-day brothel existence and contains a bit of sexual content, it's very tastefully done and in no way should be considered yet another example of four-color spank material; in other words there's sex in in it, but that ain't what it's about.

This was my first exposure to the work of husband and wife team Hubert (writer and colorist) and Kerascoet (artist), but if the rest of their output is even half as good as MISS DON'T TOUCH ME, they can add me to their roster of adoring fans. Excellent story, charming cartoon-style art that works perfectly with the narrative, not one wrong step taken in its entire ninety-six pages. HIGHLY RECOMMENDED.
Posted by Bunche (pop culture ronin) at Tuesday, December 09, 2008