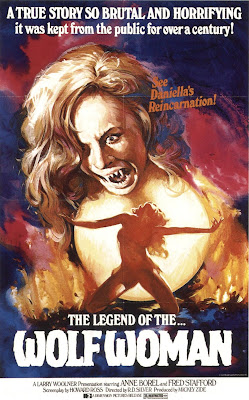 There are those among the horror-addict fraternity who don't give a shit about how terrible a film may be reported to be, so long as they get to see a new movie about their favorite creepy-crawly. I have friends and loved ones who will sit through even the most wretched and boring waste of celluloid provided it gives them their ghost/vampire/slasher/zombie fix, and I'm the guy who's dumb enough to do likewise for werewolves. I’ve endured a number of those horrendous Paul Naschy wolf-man flicks (of which there are around a dozen), WEREWOLVES ON WHEELS, the HOWLING sequels, that THE COMPANY OF WOLVES bullshit, THE WEREWOLF OF WASHINGTON and THE BEAST MUST DIE, so I figure I can take just about anything offering the merest hope of lupine violence and despite its rather foul rep I’ve wanted to check out LEGEND OF THE WOLF WOMAN since I first heard about it just over thirty years ago in a CINEFANTASTIQUE review that gave it a sound panning. Well, that opportunity finally came when the movie was released on DVD in its uncut form (apparently the original U.S. release trimmed the movie by nearly a half hour) under the title WEREWOLF WOMAN, and while I’ve seen far worse I’ve also seen far better.

This bit of lycanthropic Eurosleaze stars French-born, ferret-faced Annik Borel — late of such classics as BLOOD ORGY OF THE SHE DEVILS (1972) and the Isaac Hayes blaxploitationer TRUCK TURNER (1974) — a blonde with haunted eyes who looks like a fusion of Sondra Locke and Judith Light, a concept for more shudder-inducing than anything found in the film. As was the wont of Eurosleaze actresses of the period, Borel was in no way afraid of shedding her clothing, a point made apparent less than thirty seconds into the flick as she is seen completely bare-assed nekkid, gyrating in a circle of fire to cheesy voodoo drums by the light of the full moon. 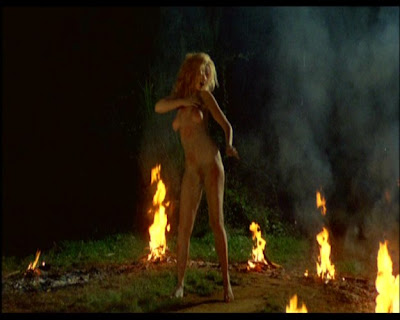 Yes, this chick’s a werewolf, and her furry look can fairly be described as the makeup artist (overrated hack Carlo Rambaldi, just prior to his leap to international fame with the 1976 KING KONG remake) sticking a fake nose and some bogus teeth onto Borel, then painting the actress’ nekkid skin with an adhesive and having her roll about on a barber shop floor; perhaps the most bizarre aspects of this makeup are the werewolf’s blonde hairdo coupled with her otherwise brown fur and Borel’s pendulous breasts being stricken by gravity in such a way that they resemble the much-suckled-upon teats of a mother beast, capped as they are with nipples resembling black olives. 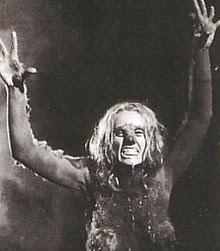 Anyway, the werewolf chick is abruptly seen trussed-up and ready for burning at the stake (we aren’t shown how this happens) and we skip ahead by about two hundred years to then-present day Italy where we meet Daniela (Borel), a mid-twenty-something dead ringer for the werewolf chick who was one of her ancestors. It’s not really made clear, but apparently Daniela summoned the spirit of her shaggy ancestor (that’s what the opening sequence was supposed to be, I guess) and is now possessed by it, giving vengeful power to her deep-seated hatred of men and the sex act. Raped in her early adolescence, she now lives in the country with her kindly and concerned father, but her now-possessed psyche goes completely around the bend when she witnesses her sister having sex with her new husband and lures the guy into the woods where she attempts to seduce him while stark naked and instead tears his throat out with her teeth before dumping his corpse down a ravine.

Driven mad by what she’s done, Daniela is institutionalized but soon escapes with the help of a friendly nymphomaniac (whom she kills with a pair of scissors), immediately embarking on a murderous spree, growling like a crazed wolf and ripping out throats willy-nilly before falling in love with a sweet and hunky stuntman who lives in an abandoned movie studio town once used for filming Spaghetti Westerns (no, seriously). Cured of her bloodlust after a month with this guy (and one of those soft-focus “romantic” montages common to Euro nudie flicks of the seventies), Daniela’s life starts taking a turn for the better. Well, that is until she’s gang-raped by three local scumbags during a home invasion, a trio of from-out-of-nowhere vermin who also murder her lover. NOTE: we are spared the “main event” of the actual gang rape but we do witness the preamble, a nasty bit of business very reminiscent of the most famous sequence in Sam Peckinpah’s STRAW DOGS (1971), and if you’ve seen that movie you know what I’m talking about, so keep that in mind before renting this on date night.

Finally driven irrevocably mad, Daniela decimates her attackers, somehow tracking down each of them despite having absolutely zero clue as to who they are or where they live and crushing two of them with a junkyard’s claw-crane that she learned to operate after watching it in action for about a minute. Catching up with her at long last, the hapless detectives who’ve fruitlessly tracked Daniela since she escaped the mental institution capture her at a remote location where she sits, open-bloused and titties-a-swingin’, sampling spoonfuls of stew from a cauldron (where she got it from is anyone’s guess). Now snarling and completely feral, Daniela is apprehended as a ridiculous voice-over informs us that we’ve just watched a re-enactment of “true” events that took place in 1968.

So those like me who love werewolf movies were suckered in by WEREWOLF WOMAN’s promise of a straight-up lycanthrope fright-fest, but instead we got a squalid piece of seventies Euro-sleaze exploitation featuring the so-called werewolf being seen only during the movie's first five minutes, minimal gore, no scares or suspense, a script full of ridiculous plot holes, and so much wall-to-wall nudity that I nearly got tired of staring at a naked chick’s bush (say it isn’t so!!!). Simply put, WEREWOLF WOMAN is kind of worth a look as a seventies curiosity that’s infamous for its general uselessness, but if you have something else to do rather than see it, by all means do whatever your other choice is. Believe me, you won’t be missing a blessed thing.
Posted by Bunche (pop culture ronin) at Monday, December 22, 2008