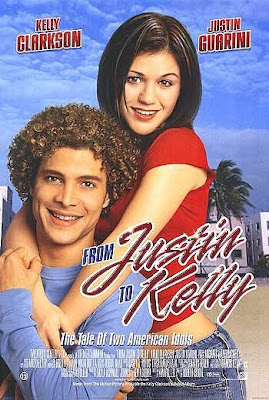 No, I haven't lost what little remains of my mind. After five years I'm finally coming clean and admitting to having willingly sat through this infamous feature starring the winner and runner-up from the first season of the ubiquitous AMERICAN IDOL, and I was not bribed into seeing it with the promise of pussy as a reward. No, I did not spend a cent on it during its epochal two-week theatrical run, instead opting to use a free video coupon on it at my now-closed local video store, but I was motivated to see it solely to marvel at what I imagined would be the ultimate example of a crass cash-in flick. Even with that in mind I was tempted to wear a bag over my head as I placed the movie on the rental counter and also considered exiting the store while ringing a hand-held bell, alerting innocent passersby to my wretched presence like that of a medieval leper, the warning sound allowing them to give me a wide berth from which to pelt me with rocks and rotting garbage in an attempt to drive me from town.

Receiving critical brickbats equal to those hurled at GIGLI, FROM JUSTIN TO KELLY was loudly hailed as “worst movie of the year” and consistently showed up ranked among the so-called worst films of all time, so my bad movie curiosity couldn’t help but be piqued. But, much like GIGLI, the film turned out to be merely a piece of perfunctory Hollywood candyfloss that, while definitely awful, turned out to be nowhere near as soul-searingly unwatchable as I had been duped into believing. That’s in no way an endorsement, but I have certainly seen far, far worse.

This cinematic equivalent to a warmed-over Pop Tart clocks in at a lean 81 minutes (there’s also an extended cut that runs for a staggering 90 minutes) and chronicles exactly the same kind of teen summer romance and misunderstandings punctuated by assembly line musical numbers that AIP churned out for years in the 1960’s as the “Beach Party” series, the main differences being a contemporary setting and that this flick stars two soul-free pop tarts who happen not to be Frankie Avalon and Annette Funicello (aaaaaaaaah, Annette…). 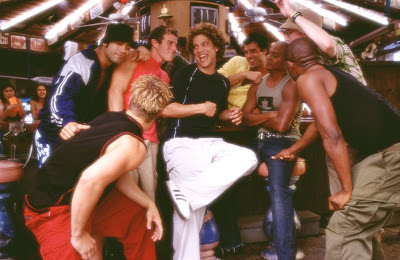 The douche-tastic Justin tries to convince others of his own awesomeness.

Multi-ethnic unthreatening Ken doll and nauseating “mayor” of spring break Justin (Sideshow Bob lookalike Justin Guarini) spends the movie trying (in the fairly chaste way common to this genre) to get into the pants of Kelly (Kelly Clarkson), setting in motion a chain reaction of miscommunication, misunderstandings, et cetera, which keeps getting interrupted by musical numbers of the most generic and uninvolving order. In other words, as previously cited, it’s a modern day Frankie and Annette flick. It’s just as disposable, just as innocent and just as inevitably forgettable, only it doesn’t have Harvey Lembeck’s comedic biker villain, Eric Von Zipper, on hand to give us “the finger” and put us out of our misery (you know what I mean by that if you’ve seen most of the Beach Party” opuses). 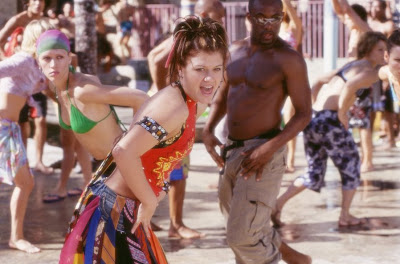 This looks to me like Kelly was caught micro-seconds away from enjoying a Tootsie Roll.

Everything about FROM JUSTIN TO KELLY was coldly calculated to lure tweener girls (and gay tweens, presumably) who followed the two paper doll stars on their AMERICAN IDOL journey out of the mall and straight to the box office and strip them of their allowance money while providing them with the bare minimum of entertainment, and the end result just lays there on the screen like a plaster lawn burro kicked over by bored suburban hooligans; it’s designed to be cute, but displays no personality and can be easily replaced by the next sparkly gewgaw to catch its audience’s eye. In fact it’s so bloody dull that it’s not even as entertaining as the utterly horrid GREASE 2 (1982), a film that at least elicited a venomous reaction from all who saw it (that “Reproduction” number still gives me the douche-chills). FROM JUSTIN TO KELLY elicits nothing save a glassy-eyed stare of boredom, so if you’re looking for a bad movie that you can hoot at, rant about like a madman and maybe even find religion over, this sure as hell won’t satisfy that need. For that I steer you toward CURSE OF BIGFOOT. 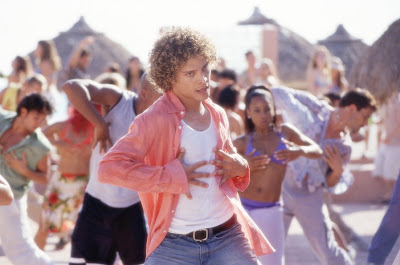 Justin leads the gang in the Dance of Nipple Discovery.
Posted by Bunche (pop culture ronin) at Thursday, December 18, 2008

And speaking of dancing stiffs, here's a holiday present posted by Kitty LaClaw. Better watch it fast, as it's bound to get yanked in no time!

"...and the end result just lays there on the screen like a plaster lawn burro kicked over by bored suburban hooligans..." Oh that's good.

Is it strange that reading this suddenly made me want to watch Empire Records?