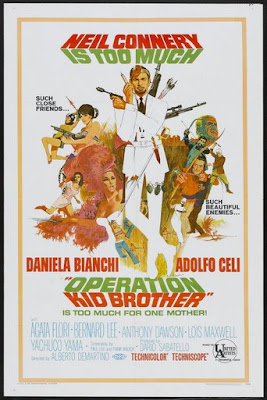 During the height of the 1960's James Bond craze it seemed like everybody and their sister was cranking out a spy spoof/knockoff in hope of siphoning off some of the 007 franchise's multi-millions, and the vast majority of them ate ass. But out of all of them none had quite the in-your-face-to-the-point-of-hilarity elephant cojones and outright shamelessness of OK CONNERY, aka OPERATION DOUBLE 007 (as memorably seen on MYSTERY SCIENCE THEATER 3000) and OPERATION KID BROTHER. This Italian-made spoof of all things 007 was heavily influenced by the camp stylings of the Adam West BATMAN television series as well as the myriad tropes of the Bond series and it's much more entertaining than it has any right to be thanks to the presence of Bond movie regulars Bernard Lee (M) and Lois Maxwell (Miss Moneypenny), as well as THUNDERBALL's villain, Adolfo Celi, and FROM RUSSIA WITH LOVE's hot leading lady Daniella Bianchi, making this the ultimate Bond spoof/ripoff. It's embarrassing enough that identifiable players from the actual series appeared in this nigh-incomprehensible mess, but the real kicker is who they got to play the Bond stand-in character. In the story the real 007 is unavailable to dive into the film's convoluted goings-on so instead the secret service recruits his younger brother, a celebrated doctor whose mastery of all manner of esoteric physical and mental skills would give even Derek Flint pause. And who, you may ask, plays 007's kid sibling? Why none other than spectacularly wooden non-actor Neil Connery, Sean's real-life younger brother, whose performance was presumably so awful that the filmmakers had his voiced dubbed over to make him sound heroic. No one, not even the Japanese, could have thought of so brilliant a gimmick for a Bond knockoff (and that's really saying something!). I mean, Sean Connery's brother?!!? It's so utterly mad that it's sheer genius, and the whole flamboyant train wreck is capped off with a poster that successfully mimics the design of a typical James Bond movie poster of the 1960's, essentially polishing a corn-filled floater turd. All that, plus a terrific score by legendary Italian film composer Ennio (THE GOOD, THE BAD AND THE UGLY) Morricone.
Posted by Bunche (pop culture ronin) at Wednesday, December 03, 2008

Wow. That must have made Connery family gatherings awkward for a while...

I'd never even heard of this until now. Young Neil looks a bit like Jason, Connery's (also wooden) actor son. Not that I suggesting anything. Okay. Maybe I am. SEAN! HE'S NOT YOURS! CHECK THE WILL!