THE GREATEST MOVIE POSTERS EVER: ORDERED TO LOVE (1961) 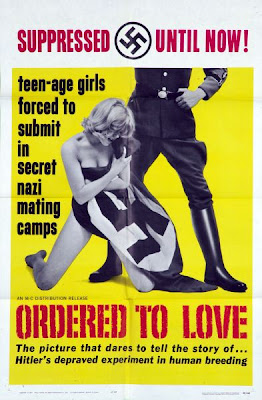 Despite my love of all things offensive, I have never been down with the whole "Nazisploitation" genre (with the exception of the unintentionally hilarious STORMTROOPERS USA), a cinematic niche that appeals to those who revel in the depiction of innocent young women being raped and tortured for the amusement of leering Third Reich vermin. Most of these odious works involve some sort of secret camp located in the middle of the hinterlands that specializes in forcing captured women to be unwilling sexual playthings when not being subjected to horrifyingly sadistic experiments from which there is little hope of rescue or escape, and every single one of these flicks is depressing and bleak to the point of making one feel like a hot shower and a good scrubbing may be needed after viewing (not that I expected a movie about nazis to be in any way a light romp, mind you). But while I may hate Nazisploitation, I do love its undeniably lurid imagery, be it on the covers of old mens' adventure magazines, trashy book covers or sleazy movie posters, as is obviously the case in point here. I've never seen the movie and don't particularly desire to, but that one-sheet would definitely get my attention had I passed by Norwalk Theater and seen it on display.
Posted by Bunche (pop culture ronin) at Thursday, December 04, 2008

Since this is from 1961, I'm sure it's far more tame than later Nazi Sex & Torture romps that were to come. In fact, I'll bet the most entertaining thing about this movie is the poster.

The most obivous film that comes to my mind is Ilsa: She-Wolf of the SS, which is both a damn-near perfect exploitation film(*) and one of the most grotesque endurance tests I've ever sat through. Just the memory of that one creeps me out.

Get ready for a tongue-in-cheek renaissance of the genre in YouTube mash-ups once Valkyrie hits the torrent circuit.