THE BEST OF SEXOLOGY-THE ILLUSTRATED MAGAZINE OF SEX SCIENCE (2008) 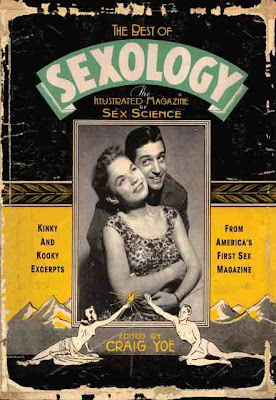 While at Friday night's signing of SECRET IDENTITY: THE FETISH ART OF SUPERMAN'S CO-CREATOR JOE SHUSTER, I chanced upon another fun bit of pop culture archaeology from author/historian Craig Yoe and found it to be right up my prurient alley. That delightful find was THE BEST OF SEXOLOGY-THE ILLUSTRATED MAGAZINE OF SEX & SCIENCE, a compendium of articles that ran in the nation's first sex magazine, and from the look of the content it was probably seen as a legitimate journal of information on all matters sexual, be it biological schematics, examination of human sexuality and assorted fetishes from around the world, and even looks at the sex lives of famed historical figures.

Founded in 1933 and lasting well into the 1970's, SEXOLOGY also featured its share of truly sensationalistic and totally ridiculous material, prime examples of which find their way between the covers of this volume. Among the book's many fascinating topics can be found the following:
And much, much more, all contained in a 480-page extravaganza that can be had for a mere $14.95. And a good deal of the material is surprisingly sensitive and enlightened for its time, so THE BEST OF SEXOLOGY is that rare book that doubles as entertainment and a look back through time at sexual issues that still hold our interest and fascination, although how homosexual poultry enters into the discussion is somewhat beyond me. RECOMMENDED.
Posted by Bunche (pop culture ronin) at Wednesday, April 08, 2009

I'm guessing you meant $14.95... or does it really cost fourteen hundred and ninty-five dollars?

Did you know that Sexology was founded by Hugo Gernsback -- the generator of the science fiction as we know it, and the man who was memorialized by the popular award the Hugo?

The Gernsback thing is covered in detail in the book's introduction. Remember, kiddies: always read the introduction! You can learn some neat shit from it.