A VAULT RERUN: BARBARIANS ON THE SUBWAY

Conan the Cimmerian, as illustrated by Mark Schultz.

"Hither came Conan, the Cimmerian, black-haired, sullen-eyed, sword in hand, a thief, a reaver, a slayer, with gigantic melancholies and gigantic mirth, to tread the jeweled thrones of the Earth under his sandalled feet."
- Robert E. Howard, "The Phoenix on the Sword," 1932.

The daily subway commute is the perfect time in which to catch up on one's reading, and I'm always nosy about what my fellow rail-riders are consuming. Every day I'm surrounded by straphangers whose awareness of the world is cut off and their full attention focused on ghetto romances — the covers of which invariably features photographs of nude black women tastefully seen from behind as they simper before some MANDINGO escapee with a "Body-by-Riker's" physique — the umpteenth STAR TREK novel, yet another V.C. Andrews captivity and incest opus, whatever book Stephen King's shat out in the last half hour, tomes that romanticize New York City to an antiseptic degree, Harry Potter doorstops, and current bestsellers, and while the predictability of fare is pretty much constant I'm sometimes thrown an unexpected curveball by a reader.

This morning as I waited for the R train to haul me to work I glanced to my right and saw a partridge-figured fifty-something blonde lady (painfully obvious dye job) reading a book that looked familiar, like one of the horde of esoterica found on the shelves in the Vault. I adjusted my glasses and took a good look at the book she was engroosed in, and my heart was gladdened to see this school teacher-looking woman devouring Robert E. Howard's THE COMING OF CONAN THE CIMMERIAN, a book for the lads if ever there was one and absolutely not what I expected to see in the eager hands of Mrs. Garrett from THE FACTS OF LIFE. 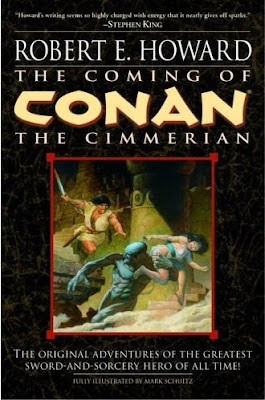 The lady noticed me checking out her book, which she then held up to display the cover and said, "Howard sure can write!" I smiled knowingly back at her, glad to see one of the minus 327 women I've ever witnessed reading such stuff. Women are no strangers to fantasy literature, but I usually see such readers engaged in Mercedes Lackey, Anne McCaffrey, and other such "girly" authors, while a scribe like Robert E. Howard is more likely to attract men and adolescent boys with his dark, atmospheric tales of bone-crushing warfare, inhuman monsters, and lush-bodied women who think nothing of going an entire story clad in naught but a sword belt and buccaneer boots. I mean, the guy created Conan the motherfucking Barbarian, for fuck's sake! Short of Tarzan, does it get any more testosterone-ridden than that? 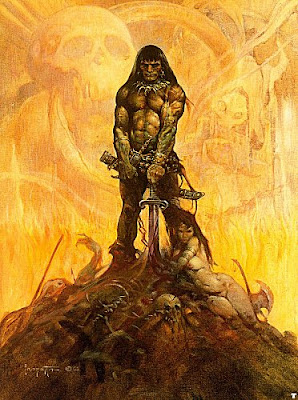 Frank Frazetta's "The Barbarian" (1966), the defining image of both Conan and an entire genre.

Unlike many of his contemporaries, Howard did more than just spin yarns in which blood, gore and titties ran rampant; Howard's savage, manly worlds were rendered with care, believability and a compelling skill at storytelling that elevated his pulp material to the level of quality literature by virtue of his exceptional talent as a writer, a talent driven by inner demons that lead him to take his own life at the age of twenty-nine. Edgar Rice Burroughs may have been more prolific and infuential what with creating my man Tarzan of the Apes and all, but if truth be told Robert E. Howard left Burroughs in the dust when it came to the sheer artistry of writing. Where Burroughs could spin a rousing yarn, Howard was in all ways the very definition of an artist. 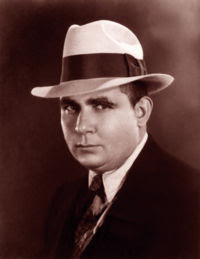 Robert E. Howard.
If you've never read any of his work, you owe it to yourself to take the lady subway-reader's cue and dive headfirst into just about any of Howard's stories, and if I may suggest you'd do well to get started with the book she was reading, and its followups, THE BLOODY CROWN OF CONAN 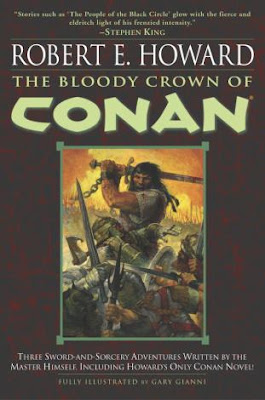 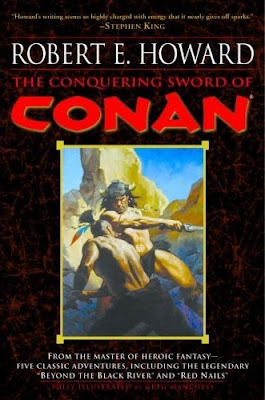 which brings "Red Nails," maybe the most well-known of the Cimmerian warrior's adventures, back into print. Great reads all, and if you dig those I'd also like to steer you to THE SAVAGE TALES OF SOLOMON KANE, 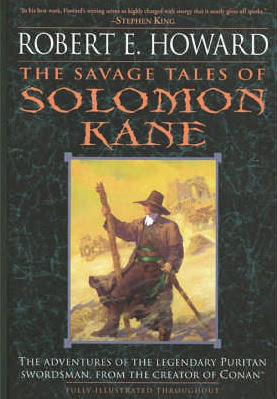 Given your taste in comics, I'll certainly trust your judgement and see how well stocked my local library is with Conan.

Oddly enough, though I was a huge swords and sorcery buff as a kid and young adult, I never read any Conan. Tolkie, yes. Stephen R. Donaldson, yes. Michael Moorcock, yes. Also must admit to my share of Pern, Shannara and Xanth novels as well, among many others.

Don't know why Conan never ended up on my radar. Nor Tarzan, really. Read a little Doc Savage from time to time, though.

Thanks, Bunche! I concur. After cutting my teeth (so to speak) on John Norman's wretched Gor books, it was a pleasure to encounter the broody Cimmarian in my mid-teenage years, right around the time the original Howard books were being reprinted in paperback. Sure, I had a subscription to Savage Sword of Conan, too, but for my time and teenage money, no one else came close to the original REH. (Although admit to being partial to Michael Moorcock's weird-ass Elric tales, for totally different reasons.)